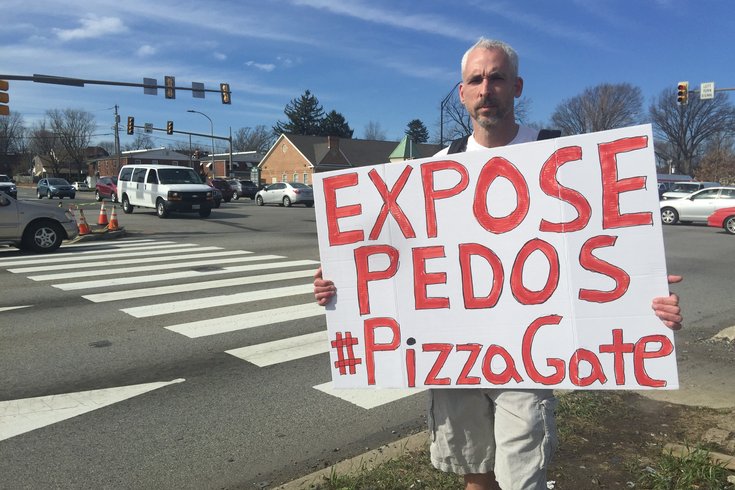 Howard Caplan, a 47-year-old Northeast Philadelphia native, has traded in his 'Hillary 4 Prison' sign to bring his Pizzagate conspiracy message directly to motorists on Roosevelt Boulevard.

Howard Caplan likes to talk. In fact, if you will spare the time, he will spend hours discussing his belief that “Pizzagate” is less of a crackpot conspiracy theory than shorthand for a wide-ranging, real-world, child sex-trafficking network.

After the November presidential election, the 47-year-old Northeast Philadelphian dropped his “Hillary 4 Prison” sign at the intersection of Roosevelt Boulevard and Grant Avenue and directed his efforts toward an issue that’s come to consume most of his time these days.

Sure, Edgar Maddison Welch drew national headlines for traveling from North Carolina to Washington, D.C. in December. That’s only natural, as he allegedly fired an assault rifle inside the pizza parlor – Comet Ping Pong – that believers zeroed in on as a focal point in the conspiracy.

While that case cemented public opinion against the Pizzagaters – it’s used as exhibit No. 1 for those who state that fake news has worrisome ramifications – Caplan has become one of the fringe movement’s most public faces during the weeks and months since.

In no small part, that’s courtesy of a viral video of him bursting into the Cathedral Basilica of Saints Peter and Paul during Christmas Mass and going ham with a screed about the church and Pizzagate. (Stories that linked to his video no longer feature it, what with his Twitter account being suspended.)

Despite all that notoriety – bolstered by an active Twitter presence that’s gotten him suspended by the social-media outfit a few times – he wasn’t willing to answer one question when he returned to that corner with a sign reading “Expose Pedos #PizzaGate” on Wednesday afternoon.

“I will neither confirm nor deny that,” he said, when asked whether he plans to return to archdiocesan cathedral in Center City on Easter Sunday, noting it wasn’t exactly easy to pull off at Christmastime.

Marching the same path he did with the Clinton sign – toward stopped traffic along the Boulevard, then crossing at Grant when the traffic lights change – he’s getting fewer honks and comments as he did during the election season. He chalks that up to people’s lack of knowledge or unease with a troubling topic.

“I’d love to be wrong. We all would, but there’s something wrong with our country." – Howard Caplan

Caplan said he’s just as committed as ever, though, to the point of deeming the Comet Ping Pong story “a false flag.” That term is defined as “covert military operations designed to deceive in such a way that the operations appear as though they are being carried out by perpetrators other than those who actually planned and executed them.”

Caplan – who is well aware that people are quick to dismiss him as crazy – bases that opinion on his Freedom of Information Act requests (seeking police reports into the Comet Ping Pong story) being rebuffed at every turn.

(Fun fact: He writes off conspiracy king Alex Jones’ Pizzagate denials as an abdication of responsibility by someone who never understood the depth of the issue. “I’ve never been an Alex Jones guy,” Caplan said. “Everybody wrote him off but now they’re giving him credibility?”)

Over the course of an hour-long chat on the Boulevard, he acknowledged that he and his fellow amateur sleuths (their Twitter direct-message chains are a sight to behold) might be better served focusing on the undeniable reality that sexual abuse of children is prevalent worldwide.

He instantly veered back to a mantra that holds, “Pizzagate is real,” meaning people involved in sex trafficking needs places to launder their profits, and he thinks pizza parlors are ripe for that.

“Most people have never heard of Pizzagate,” he admitted. “My main thing is letting people know that it’s out there, and ask them to take a look.”

He deemed the term “pizzagate” as a symbolic umbrella and cited a wide array of high-profile cases that prove child-sex assaults are a problem of both international and local importance.

His point? Nobody can deny that abuse is real. Couple that with “creepy pictures” on pizzeria Instagram pages and human-trafficking profiteers not exactly being able to walk into a bank and make deposits and – voila – “Pizzagate is real.”

“We’re talking about hundreds of billions of dollars, and statistics about children going missing around the world are hard to come by,” he maintained. “It’s not just about Comet Ping Pong. It’s not just about pizza. Trafficking is big business and they need to hide the money somewhere. They hide it at businesses that serve as fronts.”

Caplan said doubters seeking proof write him off by thinking they could “walk into a pizzeria and see people having sex with kids, but that’s not how it works” and rues the fact that his amateur-sleuth collective doesn’t have the investigative powers of, say, the F.B.I.

Conceding that they have nothing but “circumstantial evidence after circumstantial evidence” to make their case – like grown men taking young girls to get pizza at 8 p.m. on a Saturday – he said he can’t figure out why people are so quick to brush him off. ("Some will say that's just a father and daughter going to eat pizza, but I saw it 10 times the other night. Something just seemed off about it," he said.)

“Even if I’m wrong about this, what are they so angry about?” he said. “I’d love to be wrong. We all would, but there’s something wrong with our country. Kids are being abused. Kids are being trafficked. It’s not an isolated thing. People don’t like to think about it, but it’s not a stretch to think some very powerful people are involved.”

Caplan is well aware that some people think he’s nuts. In fact, some who’ve known him have reached out to me after the previous stories ran to say as much out of concern for his well-being.

Still, when he speaks, it’s with the authority of someone who has spent months delving into an issue, regardless of whether you believe his conclusions or not.

On Wednesday afternoon, Caplan’s sign drew several honks and thumbs up from passersby – one school bus and several work trucks among them – along with those who took pictures of him.

By sheer numbers, he’s certain that pedophiles have driven past him. He takes a certain pride in knowing, if that’s the case, that he’s made them very uncomfortable. The lack of eye contact, he said, is a tell – and he's looking for tells like a poker shark seeking out prey.

When he’s asked for his overarching message, it’s this: Just take a few minutes and look into what we’re saying. What’s the worst that can happen by doing that?

“Just don’t act like I’m just some nut out there. People don’t know what I know," he said. “They should keep an open mind about this. It’s not about politics. It’s about kids. It’ll take a while (for us to prove these accusations), but it’s just a matter of time until we do.”