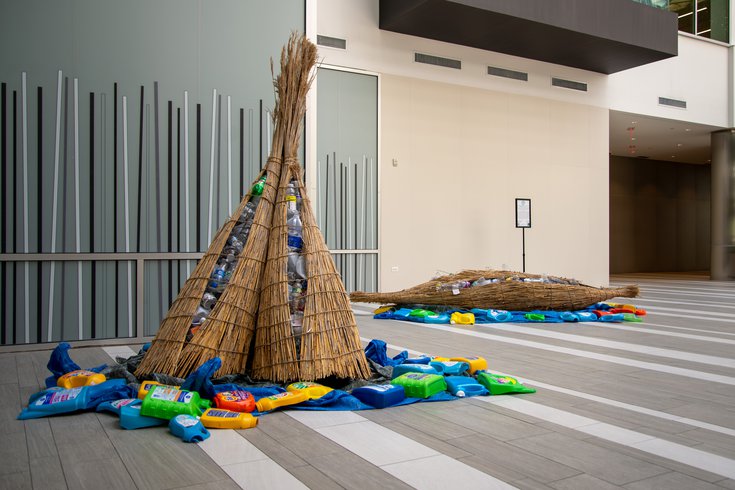 'Plastic-free Philly' is an initiative encouraging Philadelphia residents to seek out alternatives to single-use plastic bottles by refilling reusable bottles with tap water. The efforts include 10 temporary art installations scattered in lobbies throughout Center City and University City, available to see through July 30. Above is 'That Sinking Feeling' by Aymar Ccopacatty, on display at 1900 Market Street.

Some workers and residents headed into Center City office buildings on Wednesday may have spotted one of 10 new art installations sitting in lobbies around Philadelphia.

The artworks are part of "Plastic-free Philly," a volunteer effort organized by Drexel University's Academy of Natural Sciences that is urging people to seek alternatives to single-use plastic water bottles this summer.  The instillations will be available to view through July 30.

The program began upon discovery that 56% of the trash removed from the Schuylkill and Delaware rivers are plastics. Choosing healthier alternatives like tap water or reusable water bottles could be a simple solution to a growing problem throughout the city and region.

"Many people are looking for things they can do on a personal level to help the environment," said Randy Hayman, commissioner of the Water Department. "One of the easiest ways is to make a big impact on the amount of plastic waste you generate by switching from single-use plastic bottles to filling reusable bottles with tap water."

Surveys from the Philadelphia Water Department and the University of Pennsylvania have found that as many as 40% of Philadelphia households regularly consume water from single-use bottles at home, many believing it is safer than tap water. Those who do not like the taste of regular tap water can opt for additional in-home water filters to reduce the overall use of plastics.

Volunteers with "Plastic-free Philly" decided to create artwork out of single-use plastic bottles and set them up in building lobbies throughout the city as a way to raise awareness about plastic pollution. The program also serves as a reminder of the beauty of the Delaware River Watershed, whose ecosystem is adversely impacted by widespread plastic pollution.

We joined @AcadNatSci + @BOMAPhilly for the kickoff of an initiative to reduce plastic water bottle use. The event unveiled art installations to inspire participation. Commissioner Hayman spoke + we held the 2022 debut of the Philly Water Bar! #DrinkTapPHL #PlasticFreePhilly pic.twitter.com/tjuxLKzmDs

Residents are encouraged to take the pledge to drink tap water rather than single-use plastic water bottles, which can reduce the use of fossil fuels and costs less than a penny per gallon to produce. PWD hopes to gain 3,000 pledges for the initiative through the end of the summer.

Those who want to check out the 10 art installations in person can embark on a short, self-guided tour through Center City and University City. The full list of artwork and their temporary homes are listed below.

Those who are looking to take the pledge and want to find ways to be more involved in environmental efforts throughout the city can join one of several cleanups hosted by United By Blue and PWD. United By Blue is a sustainable clothing brand that removes one pound of trash from waterways for every purchase made.

The company hosts community cleanups in cities throughout the country, including Philadelphia and Asbury Park, New Jersey. The next Philly cleanup is scheduled for July 21 at the Frankford Boat Launch from 4 to 6:30 p.m.

Plastic is the most prevalent type of debris found in oceans, rivers and the Great Lakes, according to the National Ocean Service. Though plastic pollution can come in all shapes and sizes, smaller plastic particles — commonly known as "microplastics" — have been found in disposable water bottles.

A 2019 study found that, among samples taken from 259 bottled waters sold in several countries globally, 93% of them contained microplastic particles.

"Plastics in our waterways are harmful in many ways to people, fish and animals," said Roland Wall, director of the Patrick Center for Environmental Research, which helps lead the Delaware River Watershed Initiative. "Plastic slowly breaks down into tiny pieces which are often ingested by fish and other wildlife, putting them at risk for choking and suffocation. These microplastics pollute the earth, and their effects travel through the food web, harming human health."

Though the World Health Organization previously found that microplastics in drinking water do not pose a serious health threat to humans, the organization did request additional research into the emerging contaminant. Wastewater treatment is known to remove up to 90% of microplastics in waterways.

Both the Schuylkill and Delaware rivers flow through the Delaware River Watershed, which provides drinking water to 15 million people. Americans purchase 50 billion single-use plastic water bottles each year, averaging 13 bottles per person each month, according to Green Cities.

Encouraging more people to ditch single-use plastic bottles in favor of more eco-friendly options is part of a sustained effort by the Academy of Natural Sciences and other partners of the Delaware River Watershed to reduce plastic pollution in the region's waterways.