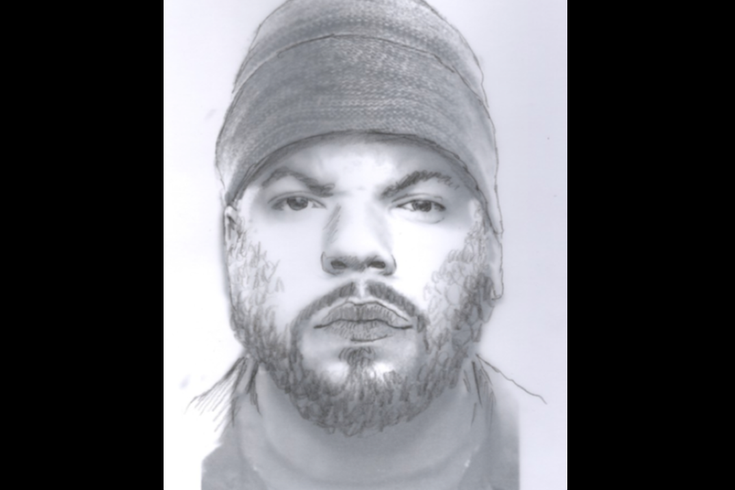 Philadelphia police released this sketch of a suspect sought for robbing and shooting a 75-year-old Tacony woman in the face on Dec. 31, 2015. The victim survived the alleged attack and even walked home to put away groceries before receiving medical care.

The Fraternal Order of Police Lodge No. 5 is offering a $5,000 award for information leading to the arrest of a man suspected of shooting and robbing a 75-year-old Tacony woman, Philadelphia police announced Friday.

The Citizens Crime Commission is offering another $1,000 for information that leads to both the arrest and conviction of the suspect.

Police also released a sketch of the suspect, described as a Hispanic man in his late 20s with a trimmed beard. He was wearing a red knit cap and armed with a handgun at the time of the crime.

The suspect allegedly stopped the Nissan Maxima he was driving alongside the victim on the 7100 block of Montague Street as she walked home from shopping for groceries around 9:50 a.m. on Dec. 31, police said. The suspect allegedly tried to snatch the victim's black handbag by reaching through the car's window and threatening to shoot her. When the woman refused to give up the handbag, police say the man shot her in the face.

The suspect allegedly then drove off with the woman's handbag, which contained $400 and a cellphone. His car briefly dragged the woman as he fled north on Torresdale Avenue.

The victim, who sustained non-life-threatening injuries, began walking home, leaving a trail of blood behind her. Police found her and transported her to Torresdale Aria Hospital for treatment of her injuries.

The woman, whose identity has not been released by police, works at Edwin Forrest School in Mayfair, according to her daughter, Edie Ritchie.

"It was very brazen, I'd say," Ritchie said last week. "It was in broad daylight. Hopefully ... we can get this guy off the streets."

Police described the Nissan driven by the suspect as a 2004 to 2008 model with a sky roof, and white or silver paint. It might have damage along the passenger side.