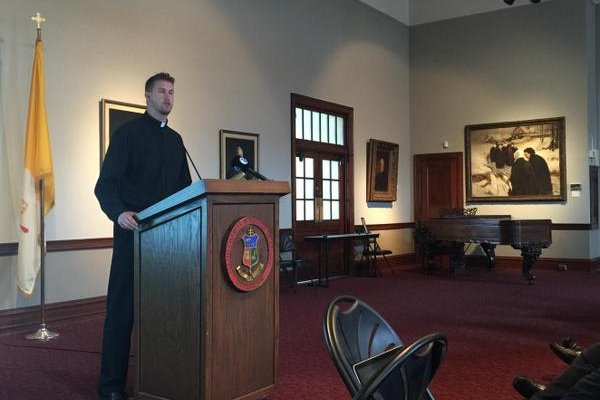 Seminarian Keith Beaver speaks at an event at the Saint Charles Borromeo Seminary in Wynnewood announcing the Archdiocese's Called by Name program.

Following Pope Francis' visit, the Archdiocese of Philadelphia is trying to build off of the papal excitement by recruiting new priests.

Their new program, entitled Called by Name, will roll out at area parishes on the Sundays of Nov. 1 and 8.

Parishioners are being asked to submit the names of young men who could enter the vocation and selected candidates will be invited to an event where the Archdiocese will make their pitch.

The Archdiocese, which announced the start of the program at Saint Charles Borromeo Seminary in Wynnewood on Wednesday, Oct. 14., says the number of new seminarians tripled at the beginning of this year

That increase was attributed to the "Francis effect" by some church officials, who said the 20 seminarians at the beginning of 2015 was the highest number in 10 years.

Thousands of pilgrims flocked to Philadelphia last month to catch a glimpse of the pontiff, who performed Mass on the Benjamin Franklin Parkway before ending his much-anticipated trip to the United States.

During the two Sundays, parishioners can fill out nomination cards recommending males 16 and older and drop them in the collection baskets.