Quadriplegic author: 'I will be out of this chair one day' 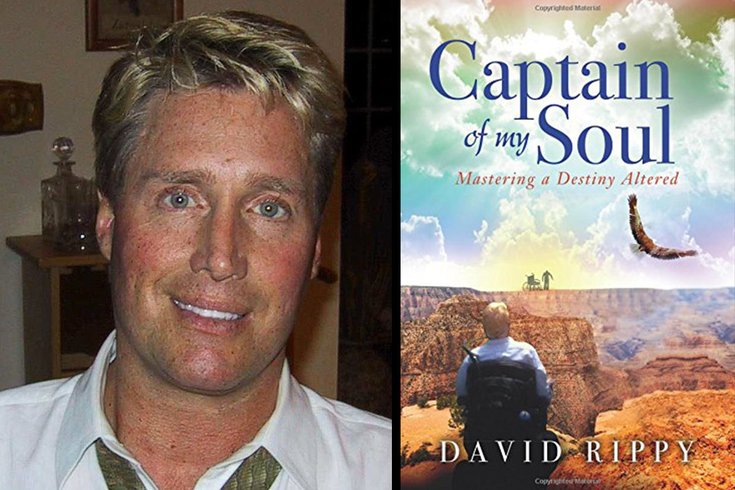 David Rippy wrote “Captain of my Soul" after he was paralyzed from the shoulders down in a car accident. “Some see what happened as an unlucky roll, snake eyes," he says. "I saw it as ‘Hey, now’s my chance that I didn’t have before to see what I’m made of.’ "

The story he wanted to tell was several decades in the making, so it’s easy to see why David Rippy took two-and-a-half years to compose his memoir.

That it centered on the impact that a one-car crash which left him paralyzed from the shoulders down had on his life – both for good and for bad – makes that accomplishment amazing, though.

“I took two summers off to write. It’s hard to stay indoors and work when it’s nice out,” said Rippy of the process that brought about “Captain of My Soul: Mastering a Destiny Altered.”

“I lack the flexibility to have portable devices in which I can type independently, so I used a mouth stick, one letter or character at a time,” he continued. “It was a process, but I have gotten up to about 15 words per minute. That will land me in the typing pool!”

That finding-good-in-the-bad spirit shined through when PhillyVoice met up with Rippy at his Exton, Chester County condo to talk about the inspirational message behind his book. It was quietly released several months ago, but he’s just shifted into the get-the-word-out phase.

While the paperback isn’t in mass circulation – he estimates about 1,000 copies were printed – Rippy hopes the “memoir on tragedy, disability and overcoming the odds” finds its way to those facing similar obstacles he’s faced since the day his life changed forever as a 25-year-old.

Speaking at rehabilitation hospitals and schools is one way to make that happen. Getting a copy into the hands of Ellen DeGeneres or another talk-show host with a substantially wider audience would bring about quite a bump, too, he said.

“I hope it’s relevant to 8-year-olds and 80-year-olds,” he said in a home densely decorated with global artifacts ranging from rare stones, a sword collection and a print of Michelangelo’s “The Creation of Adam” painting.

“It’s about a journey that other people are also going through, and how I came out of the abyss, finding something more to focus on, one that gave me the ability to find other things that I wasn’t that familiar with,” Rippy continued. “In a sense, it grounded me more.”

While Rippy consciously chose to keep many of the specifics out of his memoir – names of hospitals and people involved, dates, ages – it starts with the “weekend of the accident.”

He was a 25-year-old who attended Villanova University, graduated from Texas A&M University with a degree in economics and was embarking on a career at a Fortune 50 company.

After a night out with friends, he was a passenger in a vehicle cruising along a “silent and desolate” stretch of Route 1 in Delaware County. The car struck a deer, veered off the road and crashed into a tree.

The driver emerged relatively unscathed. Rippy did not, and the book goes into painful detail of what happened at the hospital and beyond. He’s been confined to a wheelchair “for more than 15 years,” he said.

“I was in the prime of my life when my world changed forever,” he wrote. “Initially, my survival was dependent upon the doctors and the medical procedures I underwent. Later, my journey and successes were dictated mainly by the powers of my mind and consciousness, something we are all capable of doing.”

With chapter titles like “Finding Acceptance & Personal Reflections,” “Learning to Adapt & Finding Patience and Peace” and “Keeping the Faith,” Rippy set out to highlight how he was able to move on with a successful life rather than wallow in woe-is-me despair.

He also relied upon – and included – quotes like Confucius’ “it does not matter how slowly you go as long as you do not stop” in the book to bolster his message.

“(This can relate to) every person’s journey who suffered trauma,” he said. “I was looking to find something to focus on (after the accident), and setting goals is what I did.

"I was competitive before I got hurt, but couldn’t be competitive physically afterwards, so I needed to be competitive mentally. It started as ‘let’s see if we can keep him alive.’ It was up to me where would I put my bar.”

"Nobody likes being paralyzed, but you can find ways to improve beyond your limitations." – David Rippy

As he adapted to life as a quadriplegic, he set out to meet his “ambition to become a money manager” and got back to work at Merrill Lynch and Vanguard Group.

Among the many photos included in the book is one of him with “future President Donald Trump” taken at a Mike Tyson fight in Atlantic City. (“He was very cordial and personable,” reads the caption. “I enjoyed discussing my career at Merrill Lynch and Tyson’s fight that night with him.”)

Despite those professional successes, Rippy ultimately left the world of finance to “write, speak, inspire and help others by sharing the story of (my) own perseverance and triumph.”

It hasn’t been an easy path, though, albeit one made easier by discovering the benefits of meditation.

“Meditation helps you see things in a broader way, from more perspectives than we give ourselves credit for. It’s all about slowing the mind down and controlling the mind chatter,” he said.

“There are four or five things that can happen in a day that can prevent me from doing what I need to get done,” he said, citing assistants not being able to get to him or issues with his van as examples. “A lot of people can grow beyond their limitations, and I was already on a pretty decent path. It’s all about finding something positive in your situation, even if it’s completing what some might consider a menial task.”

WHAT THE FUTURE MAY HOLD

When it came to writing his book, the driver from the night of the accident served as his editor. They’ve remained friends in the years since.

Rippy plans a second book – “A Practical Guide to Survive and Thrive with Disability and Disease” – which he hopes to release in May 2018.

Though he doesn't dwell on negatives over the course of an hour-long conversation, he noted that public-place accessibility for people in his situation is a continual challenge.

He also noted that Pennsylvania "is one of the top three states" for deer-related car accidents, meaning many people face injuries as a result. ("It's not about me being deer-phobic, worried about getting into another accident," he said. "But something needs to be done.")

“I’m not out to make money with these books, though it wouldn’t hurt. The goal is really to connect with people facing similar challenges,” Rippy said. “This second book will help people through the eyes of someone who’s been through it.”

Asked how he thinks the journey has changed him, Rippy said he doesn’t think it has to any large degree.

“It made me more humble, more grounded. It gave me the opportunity to learn more about myself when I wouldn’t have taken the time to figure out who I am or what I can do before,” he said. “Some see what happened as an unlucky roll, snake eyes. I saw it as ‘Hey, now’s my chance that I didn’t have before to see what I’m made of.’

“If you look at those setbacks as challenges or tests, and get over or beyond them, you’ll be stronger on the other end. Nobody likes being paralyzed, but you can find ways to improve beyond your limitations.”

Sure, he misses water skiing and the ability to go into a store a shop by himself, but he doesn’t dwell on it. In fact, as he shows off the RT300 restorative therapy bike – with arm swings and electrodes that jolt his muscles – he talks optimistically about a future that he thinks will be his.

“Do I believe I’ll be up and walking again? Yes. I feel I will be out of this chair one day,” he said. “I expect a miracle whether through science or something beyond most people’s understanding.”