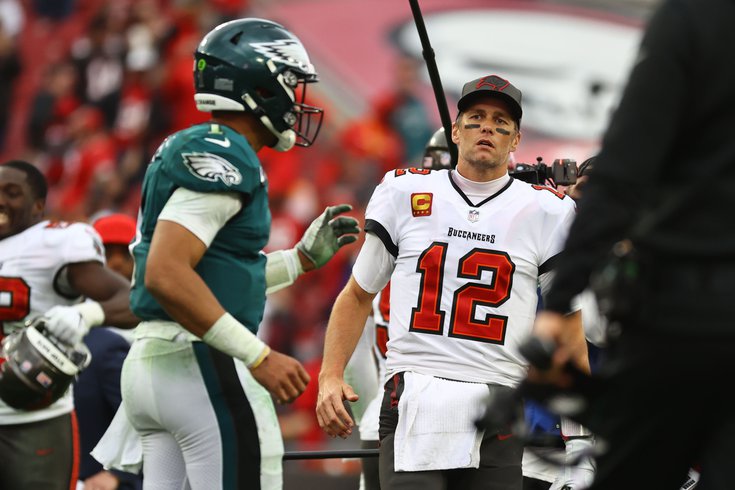 Jalen Hurts and Tom Brady after their January 2022 playoff matchup.

Does anything set the internet ablaze quite like quarterback rankings? That's what ESPN's Dan Orlovsky did on Tuesday when he talked about which QBs NFL teams win "because of" and which QBs teams win "with":

QBs you win games “with” in the NFL

Everyone else is win in spite of/unknown because of age

Unsurprisingly, I have some qualms with this list! The first NFL regular season is 100 days from Tuesday and I am jonesing for some football right now. I'm going to one-up Orlovsky and do tiered rankings of my own: QBs who make you win, QBs you win because of, QBs you win with, QBs you win in spite of and a TBD section.
In each tier, the players are roughly interchangeable and I'm not going to have them in any specific order. Read 'em and get angry!

QBs Who Make You Win 👽

My take: Plop these dudes on any team in the league and they're going to have a path to contention regardless of situation. Call it an "alien" tier.

QBs You Win Because Of 💪

My take: These things can fluctuate. I would've has Russell Wilson in the first tier a couple years back. Justin Herbert and Joe Burrow could jump up there as soon as this year. A post-injury Lamar Jackson could make strides as well if he regains that 2019 MVP form. On the other side, Matt Ryan could drop depending on if he has a rough going in his age-37 debut in Indianapolis.

Ryan Tannehill was on the bubble for me. I give him the benefit of the doubt for leading Tennessee to the top seed in the AFC despite Derrick Henry's injury and because of his uber-efficient 2019 and 2020 campaigns.

QBs You Win With 🤷

My take: Again, things could fluctuate quickly here. Kirk Cousins isn't far off from Tannehill in my eye. If you asked me three years ago, I would've considered putting Carson Wentz in the "alien" tier. He's on the verge of dropping a tier pending if he can revitalize his career with Washington.

Mac Jones had the most impressive season of any 2021 rookie signal-caller and could find himself rising this in 2022.

Well, Jalen Hurts? This is a fair spot to me. Orlovsky didn't have him this high. With the talent around him offensively between the league's best line, a dynamic receiver duo in A.J. Brown and DeVonta Smith, plus Dallas Goedert as TE1, it'll be on his shoulders to showcase why the team can win with him and potentially because of him.

Also, Jimmy Garoppolo has taken the 49ers to the NFC Championship Game twice in three years and nearly won a Super Bowl. Despite that, San Francisco appears hell-bent on getting rid of the guy. That defines the "win with" tier.

QBs You Win in Spite Of ☠️

My take: Hurts over Tua Tagovailoa is a pretty easy call for me, but their situations aren't too dissimilar. 2022 might be the last chance they have to prove to their respective teams that they can be franchise QBs before those teams move on. Miami has made some splash acquisitions to put Tua in a place to succeed. Still, it's more of a "I'll believe it when I see it" case for Tagovailoa.

I'll forever remain a Marcus Mariota stan because of my fascination with Oregon football during the Chip Kelly days in Philly. Mariota will turn 29 in October, however, and I don't have much optimism that Arthur Smith in Atlanta is the guy to flip his fortunes.

I could've put Davis Mills in the "TBD" tier, but I'm not bullish on his prospects.

My take: These are the non-Jones 2021 first-round QBs. I'm expecting big things from Trevor Lawrence with new Jaguars head coach Doug Pederson. I don't know what the future holds for Zach Wilson and Justin Fields, but they could certainly make Year 2 progress. I have no clue what to make of Trey Lance and whatever is happening with the 49ers and Jimmy G.