The film premieres July 2 on Hulu and at select theaters 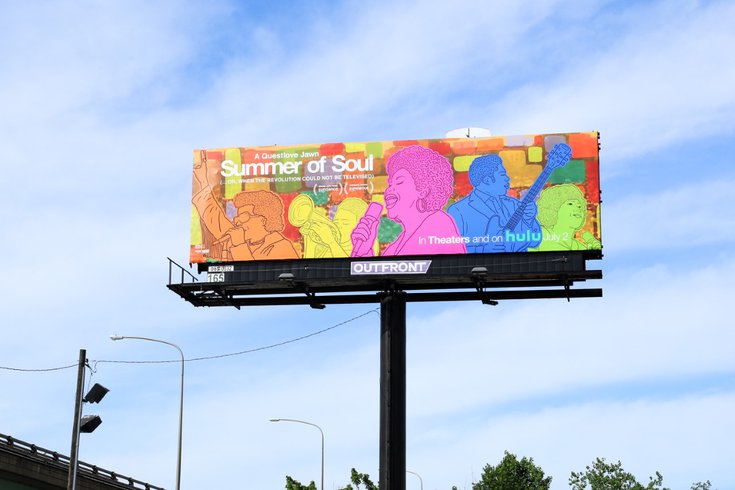 Questlove commissioned three local artists to create murals inspired by his film, "Summer of Soul," in the weeks leading up to its release. Symone Salib's mural (pictured) is the first of three murals to go on display.

Questlove partnered with Mural Arts to feature local artists in a series of billboards advertising his upcoming documentary film, "Summer of Soul."

Over the course of about one month, the Roots founder and Searchlight Productions worked with Mural Arts to find three local artists to make their own billboard-sized murals, visible from the I-95 corridor and on street level in Fishtown.

"Questlove, in talking with Searchlight Pictures, wanted to do something special in Philly," Conrad Benner, the project manager, said in an interview with PhillyVoice. "There were a few different ideas, but it landed on hiring three local artists of color to produce three works of art inspired by the movie, and then turning those works of art into billboards."

Philadelphia is the only city to have local artists featured in the movie's advertisement, Benner said. The artists were selected from previous Mural Arts projects and they each were able to screen the movie early to get inspiration for their piece.

"Questlove has directed a piece of fine art in my opinion. To then employ and hire and support local artists to celebrate the art I think is a really natural way to help get the word out on something like this," Benner said.

The movie, "Summer of Soul," tells the story of the 1969 Harlem Cultural Festival, sometimes referred to as "Black Woodstock," which featured performers like Stevie Wonder and The 5th Dimension.

Despite the hundreds of thousands of attendees, the event was largely forgotten after the footage documenting it was lost. Video was later found in the basement of one of the event directors, and Questlove was asked to make something out of it.

"Summer of Soul" was featured at the 2021 Sundance Film Festival and won both the Audience Prize in nonfiction films and the Grand Jury prize.

The first of the three billboards was unveiled last Friday and features Symone Salib's mural.

Salib is an Egyptian and Cuban portrait painter that utilizes linework and bright colors in her pieces. She has created several murals for the city, including Wash Your Hands and We Did That.

Salib said after Searchlight Pictures contacted her about the mural, she created her design in about a week and a half.

"I feel so fortunate to have been included in this project, to have been able to really experience it and make something after watching it that really represented what the whole film was about," Salib said in an interview with PhillyVoice.

She said she was inspired by the multi-colored blocks featured on the festival's stage and wanted to capture the feelings of joy and celebration that live music brings to her.

"The ambiance and the energy of everything and peoples' outfits, the way they looked and how excited they were, you could feel that throughout the whole film," she said. "I was just trying to capture the essence of what people were visually looking at when they were at the festival themselves."

Salib's billboard mural stays up until Wednesday, when it will be replaced by Ernel Martinez's portrait. Martinez has worked on several pieces for Mural Arts and received his Masters in Fine Arts from the University of Pennsylvania.

Then, on July 6, a piece from Arthur Haywood will go up on display until July 18. Haywood is also a Mural Arts veteran and is currently working on artwork for Lycée Paul Lapie at the Fondation Des États-Unis in Paris until the end of this month.

The billboard is in a high traffic area and gets lots of visibility.

"It's such an incredible opportunity to have your artwork seen by so many people," Benner said.

In 2013, Mural Arts commissioned a mural to honor The Roots on the side of a charter school at Broad and South streets, a half-mile from the Philadelphia High School for Creative and Performing Arts, where Questlove went to school and met fellow Roots members Black Thought, also known as Tariq Trotter.

"Summer of Soul" will be released on Hulu and in select theaters on July 2, including Bryn Mawr Film Institute, AMC locations in South Jersey and a special showing at The Bourse.