After two miscarriages, a rainbow baby is on the way

As my strong little girl grows beautifully, the fear has evaporated 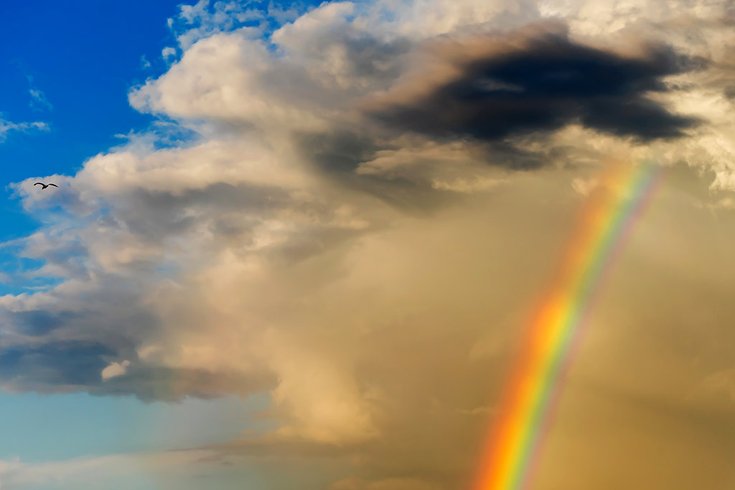 With joy and gratitude, I am thrilled to announce that my husband and I are expecting our second child. Killian is going to have a little sister!

I have hoped and prayed for this baby for a year-and-a-half. Our daughter will be my second child, but this is my fourth pregnancy. As many of my readers know, I had a miscarriage last spring. As very few know, I had a second one six months ago.

A baby born after a miscarriage, stillbirth or infant loss is commonly referred to as a rainbow baby. A rainbow follows a storm. It gives hope for happiness. “And the dreams that you dare to dream really do come true…” My rainbow baby will arrive this fall.

When Killian was a year old in late 2017, we started trying for a second child. I was really looking forward to having another baby and giving our son a sibling. Because conceiving Killian happened so quickly, I was expecting another easy pregnancy. But that was not what life had in store.

Last October, on National Pregnancy and Infant Loss Awareness Day, I shared about my first miscarriage. About a year ago, when I was 11 weeks pregnant, I was told I had a blighted ovum. I was devastated and totally shocked. My obstetrician explained how common miscarriages are. Previously, I had no idea that one in four pregnancies end in miscarriage, many times by no fault of the mother. My doctor told us to have hope and keep trying. She said the best indication that we would conceive and have another healthy baby was my toddler I clung to as I cried in the doctor’s office that day.

I was relieved that my obstetrician reassured me that I had not caused the miscarriage because it alleviated any guilt I may have felt. But it also left me feeling a little powerless. In an attempt to regain some control, I put some energy into attempting to aid in conception. I tracked my monthly cycle and ovulation using an app I downloaded on my phone. I took a prenatal vitamin with DHA every night before bed. I continued to live a healthy life by exercising, eating a well-balanced diet, and not drinking too much alcohol. Most of all, I tried to have faith and not get too stressed out over it. I told myself that somehow, someway, we would have another child.

But every month when I got my period, it was hard not to feel defeated. I checked in with my obstetrician six months after the miscarriage to see what else I should be doing and if she recommended fertility testing. She said I should try a little longer before going to a fertility specialist. My doctor said to have a lot of sex with my husband and stay optimistic.

Several months – long, confusing, frustrating months – passed before I had another positive pregnancy test after that first miscarriage. I thought finally the dream of having a second child was becoming a reality. But in less than a week I started bleeding. My second, short-lived pregnancy was a chemical pregnancy. This occurred just before Thanksgiving last fall. Over the holiday, I focused on what I was grateful for and how lucky I am for my beautiful family of three. But it was hard not to think about the baby I felt was missing from my life.

After the second miscarriage, my doctor still advised holding off on fertility testing. She said wait until spring or summer. But I made the decision that I would visit a fertility specialist early in the New Year. Why wait?

Then, in mid-January, I had a positive pregnancy test. I was overjoyed – truly ecstatic – but my excitement was quickly tempered because of my past miscarriages. Even my obstetrician, who had been so positive, said I should not be surprised if this pregnancy ended in another miscarriage. Leaving the doctor’s office after confirming this pregnancy – now my fourth – I cried, not because I was happy but because I was scared. The days leading up to my 8-week ultrasound felt like months. I was so anxious to learn if my baby had a heartbeat.

My husband was positive and supportive. Through the miscarriages he kept telling me that one day we would have another baby. His optimism was exactly what I needed. As our 8-week ultrasound grew closer, I said I wasn’t sure if we should bring Killian. Our son was with us last spring when we learned of my miscarriage. While he was too young to understand at the time, he was upset by seeing his Mama crying. Ryan said we should bring Killian with us because he was sure that we were going to get good news this time. When we saw and heard the baby’s heartbeat, I was so glad our son was there to celebrate with us.

Now that I am in my second trimester, I’ve had a few ultrasounds and blood work DNA testing that screens for genetic disorders to confirm the health of my baby. My little girl is strong and growing beautifully. My fear of miscarrying again has slowly evaporated.

Even before this pregnancy, I had a very blessed life. Many women and families who are struggling with conceiving and fertility do not have any children yet. During my saddest moments with my miscarriages, I always felt tremendously grateful for my son. I knew that if Killian was my only child, I would still be the luckiest mother in the world. But I also knew that if conceiving naturally again was not an option for our second child, I would investigate every option for having another baby.

If you are trying to conceive and feel frustrated, try to stay positive and hopeful. Miscarriages are so common. Even women with many miscarriages can go on to have healthy, full term pregnancies. Your obstetrician will advise if fertility testing and treatments are a good option for you to consider. Adoption is another incredible way to bring a baby or child into your family.

Keep the faith that if you want to have a baby, somehow, someway, it will happen for you. Don’t lose hope. Stay optimistic. It is cliché, and sometimes when my doctor said it to me I wanted to scream, but it is true. Keep waiting for that rainbow. She’s coming for you.

Have you struggled with conceiving a child? Share with me and other parents in the comments section below, or tweet me at @ThePhillyVoice and @KathleenEGagnon.