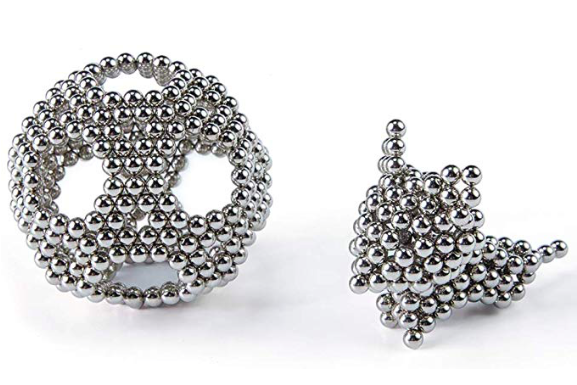 Rare-earth magnets are up to 10 times more powerful than standard magnets. When swallowed, the popular beads can wreak havoc on the intestines, requiring emergency surgery. Though they were banned in 2012, the products were allowed back on the market in 2016.

Three years after her son needed emergency surgery, a Philadelphia mother is reminding other parents that rare-earth magnets pose a serious risk to children.

Sara Bode Cohen took to Facebook on Sunday to recount the story of her son, Aaron, who was 7 when he swallowed two small beads with high-strength magnetism.

Made from alloys of rare-earth elements, these products are the strongest type of permanent magnets on the market, up to 10 times more powerful than standard industry magnets. They are often used to create models and make those distracting office-desk knick knacks. Cohen bought them for her son as a Christmas present in 2016.

When Aaron swallowed just two beads, they perforated his intestines. The surgeon told Cohen that if she had waited just a few hours more, her son would have lost his bowel and required multiple surgeries. They were able to remove one, but the second one was left to pass two months later while he was monitored closely with X-rays.

"Aaron was lucky, but there are many kids who are not so lucky," Cohen wrote. "These rare earth magnets are being sold everywhere now, and their unusual strength is what makes them so dangerous. The magnets literally rip through intestines and can cause irreversible damage and death if accidentally swallowed."

In 2011, amid mounting reports of ingestion injuries, rare-earth magnets prompted a warning from the federal Consumer Product Safety Commission.

The next year, regulators banned the strongest types of magnets, effectively toppling the market for them. Incidents plummeted over the next few years, but two companies that challenged the ruling, according to the Washington Post.

One of the companies eventually reached an agreement with the CPSC and later voluntarily dissolved. The other company, Zen Magnets, successfully got a federal judge to lift the ban, allowing the products back onto the market in 2016.

Zen Magnets head Shihan Qu has acknowledged that rare-earth magnets are "an inherently dangerous product" that should be kept away from children. In his challenge to the CPSC, he argued that it's not sensible to ban or change all small products in order to prevent children from choking on them.

In the years since the ban was lifted, ingestion cases have climbed higher than at any previous point, according to poison control data, which does not capture all incidents. There were 1,580 accidental ingestions in 2019, up from just about 400 in 2012.

While rare-earth magnets remain available for purchase, Cohen wants parents to recognize that the most important step they can take to protect their kids is not to buy them as gifts or keep them around where children can reach them.

"I’ll never get over the guilt having bought these for Aaron not knowing the dangers, but I can warn others and ask that this message be spread far and wide," Cohen wrote.