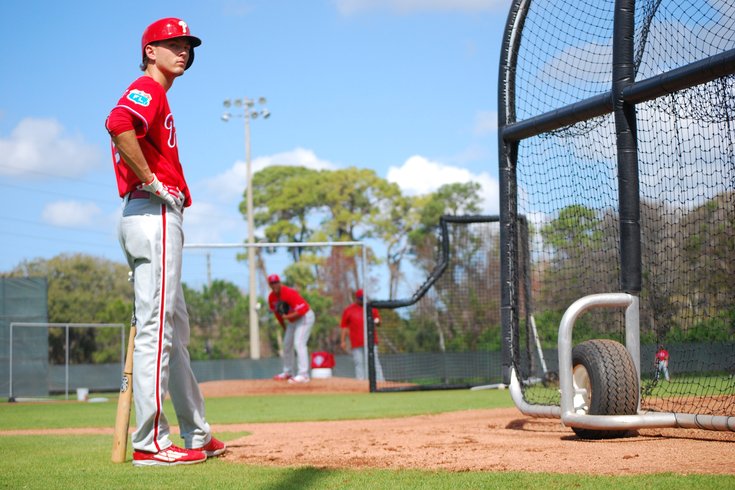 Tyler Goeddel is making his first major league start tonight for the Phillies against the Cincinnati Reds. He is one of two Rule 5 picks on the team's current 25-man roster.

CLEARWATER, Fla. – On Friday afternoon at Bright House Field in Clearwater, an athletic, contact-hitting outfielder took his position in center field on a rebuilding team.

The former Rule 5 pick could be an important building block for that team, a team that’s seen an infusion of youth into its minor league system while veterans have been regularly shipped out the last 18 months. He doubled to lead off the game, showing off the offensive skills that came to fruition last year, complementing his strong defensive game.

The player was not Odubel Herrera, but instead, Ender Inciarte, the Atlanta Braves new leadoff man and a player in camp with the Phillies just three years ago as a Rule 5 pick.

“Every year it feels like I’m in a new spot,” joked Inciarte, who was returned to the Arizona Diamondbacks by the Phillies in April of 2013 and was then traded to the Braves this winter. “I’m getting used to it now.”

Yes, Inciarte would look pretty good in any outfield spot for the Phillies, a team that has failed to find regular, permanent outfielders since trading off Shane Victorino (another Rule 5 pick) and Hunter Pence on the same July afternoon 3 1/2 years ago.

“It helped my career,” Inciarte said of his two-monthlong stay with the Phillies. “I’m grateful for it.”

The Phillies front office may have whiffed on Inciarte – the players that would take his roster spot that year were, in order, Ezequiel Carrera, Delmon Young and Casper Wells, who hit a combined .236 with a -1.8 WAR in 105 games – but they are in  better position to stash a Rule 5 kid on their roster this year. Just as they were last season.

“Everybody likes him,” said manager Pete Mackanin, who received good reports from Goeddel’s performance in a split squad in Tampa on Thursday. “This was my first chance to see him and I like him a lot.”

Herrera, the team’s best player from start to finish in 2015, despite learning a new position, is proof of how a rebuilding team can roll the dice and win big in the Rule 5 draft. This year, another toolsy outfielder is getting an opportunity: 23-year-old Tyler Goeddel.

The Phillies plucked Goeddel with the first pick in the Rule 5 draft three months ago and are already seeing results. After sitting out the first half of the week with the flu-like illness that’s invaded the clubhouse, Goeddel went 3-for-7 with a double and three RBI in his first two games of the spring.

“I was a little concerned yesterday because I hadn’t seen live pitching in five days or so when I was getting over the sickness,” said Goeddel, one of Tampa Bay’s 10 selections in the first 60 picks of the 2011 draft. “But luckily I was able to put on some good swings and get results early, which is always great for the confidence.”

“Everybody likes him,” said manager Pete Mackanin, who received good reports from Goeddel’s performance in a split squad in Tampa on Thursday. “This was my first chance to see him and I like him a lot.”

Goeddel was back in the lineup (hitting leadoff) on Saturday in Dunedin. He went 1-for-4 in the Phils' 9-6 loss to the Blue Jays.

There’s a good chance he’ll be in the lineup more often than not in the next week, too, and not just because the Phillies are a couple of outfielders down with injuries to Cody Asche (oblique) and Aaron Altherr (wrist). They’ll give Goeddel regular at-bats this spring because they have to, and have nothing to lose by doing so, as a rebuilding team attempting to add as much talented young inventory as possible.

It’s a change of philosophy since Inciarte's spring in Clearwater: the current Atlanta Braves center fielder received just 33 Grapefruit League at-bats in 2013, fewer than the illustrious trio of Pete Orr, Yunieky Betancourt, and Laynce Nix. (For another frame of reference: Odubel Herrera received 70 Grapefruit League at-bats last spring). After trading for Ben Revere in the winter of 2012-13, the Phillies were committed that spring to Revere, Domonic Brown, and John Mayberry Jr., with Delmon Young nursing an injury but on tap to have a starting spot.

While the argument could be made that it was tough to stash a Rule 5 guy on a team that was hoping to contend, it’s a flimsy argument since Michael Martinez managed to stick with the previously-mentioned 102-win Phillies two years earlier. The reality, though, was Martinez was a 28-year-old Triple-A vet with an effective, versatile glove (if nonexistent bat) while Inciarte was 22-years-old without having played a single game above Class A.

“When I was with (the Phillies), that’s when I opened eyes from other organizations and even when I got back to the Diamondbacks they started taking care of me more and paying attention to me,” Inciarte said.

That doesn’t mean the team couldn’t have kept Inciarte – remember, he was replaced on the roster, in order, by Ezequiel Carrera (in Toronto’s lineup Saturday!), Delmon Young and Casper Wells – it just means the Rule 5 draft can definitely be boom or bust. The fact is, however, it has a far better chance to be a boom when you enter the season in rebuild mode, where the chief goal is growing young talent.

Looking back, Inciarte said he had no regrets.

“I wasn’t going to play with the Phillies. I got a chance to develop more at Double-A, I got 500 at-bats,” Inciarte said. “It was all for the best, because I am where I am now.”

Instead of feeling bad to be sent back, Inciarte was thankful for the Rule 5 experience, going so far as to call it “life-changing.” He said he learned more about base running, among other things, from Chase Utley, and gained more confidence as a hitter from then-assistant hitting coach Wally Joyner.

“When I was with (the Phillies), that’s when I opened eyes from other organizations and even when I got back to the Diamondbacks they started taking care of me more and paying attention to me,” Inciarte said. “So I’m always going to be grateful to the Phillies organization. … It helped my career. I’m grateful for it.”

Goeddel can only hope to be able to say similar things when he’s three years removed from the experience, too. And the Phillies, with at-bats to give him this spring, can only hope he’ll follow the path of Herrera and establish himself as a potential building block for their next contending team.

“It’s an exciting opportunity,” he continued. “You have a shot to make a big league team. If you’re not Rule 5 and you’re just protected on the 40-man, most likely you’re not going to make the team out of camp. So it’s a great opportunity for sure.”

As recent history has proven, the opportunity almost always works out for the player, if not always the team.