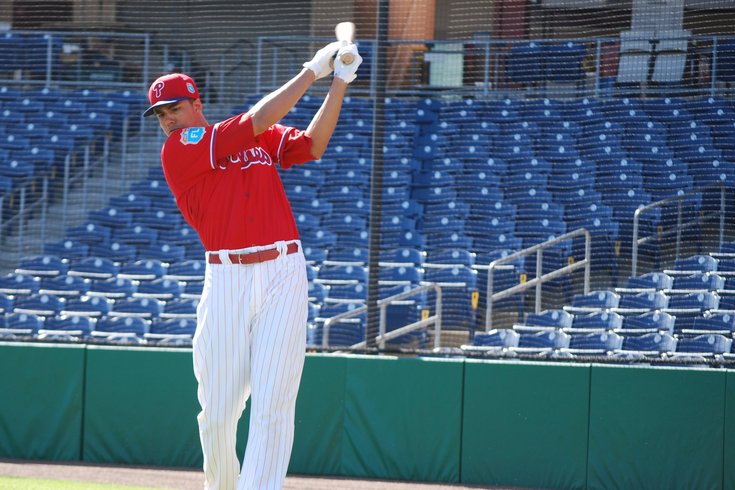 CLEARWATER, Fla. – Aaron Altherr’s availability for this weekend’s exhibition schedule against the Blue Jays and Yankees is unknown. So is whether or not he’ll be able to get back into the lineup next week.

On Friday afternoon, the first batter of the game, Atlanta’s Ender Inciarte, ripped a double into the right fielder corner. Altherr made a diving stab at the ball and landed awkwardly on his left hand.

Although more than three hours had passed since the incident, the Phillies did not have an update on Altherr’s status when their game with the Braves went final. Manager Pete Mackanin said there was “a little swelling,” but whether any tests were done was unknown Friday afternoon.

“I haven’t heard anything from the trainers or anybody yet, what the deal is,” Mackanin said. “I’m anxious to see what happened. I can’t say it looked real bad, but we’ll wait and see.”

Mackanin added that Altherr volunteered that he should get it checked out immediately after the game’s first half inning. If Altherr does have to miss time – but the injury isn’t serious, either – he should have plenty of time to catch up and get ready for the regular season.

“Hopefully it’s not very serious and he can get back in there real quick, because we want to get everyone the at-bats and we want these guys to compete,” Mackanin said. “So hopefully he’s OK.”

Andrew Bailey’s spring debut in a Phillies uniform surely keep him in the conversation for the wide-open closer race in camp.

Bailey, one of two South Jersey natives in camp, struck out the first batter on the way to retiring three of the four hitters he faced in a scoreless second inning. Bailey’s fastball registered at 93 MPH.

“I gave up a hit, but it was just bad location there,” said Bailey, who allowed a two-out single to Erick Aybar before getting Nick Swisher to pop out to second base. “I was pleased I was spotting up my fastball. Especially the first guy. It’s aways nice to see a swing-and-a-miss. A swing-and-a-miss as a pitcher is always a good sign when you don’t know (velocity) or how you’re pitching to hitters until you actually (out there doing it). So for me, there is always a checklist. You see a guy swing through a heater, breaking stuff in the dirt, locate your fastball. That kind of stuff.”

A former American League Rookie of the Year and two-time All-Star closer, Bailey is attempting to have a full healthy season in the big leagues for the first time since 2011. (Shoulder surgery forced him out of action for most of the last two seasons).

“I like him,” Mackanin said. “I’ve seen his sides, his live (batting practice, too). I like what I see.”

Ryan Howard did not have a very good second inning.

While the Phils scored seven runs in between, Howard stuck out to begin and end the inning. He was immediately taken out of the game, however, because he is the latest member of the team (following outfielders Nick Williams and Tyler Goeddel) to get sick.

“We sent our Triple-A manager Dave Brundage home (today),” Mackanin said. “Guys have been taking turns going home. I asked (Howard) if wanted to play and he said let me take it at-bat to at-bat. After that second at-bat - he was all congested and didn’t feel right.”

Both Charlie Manuel and Mike Schmidt have also been recent victims of the illness, which apparently began with hitting coach Steve Henderson.