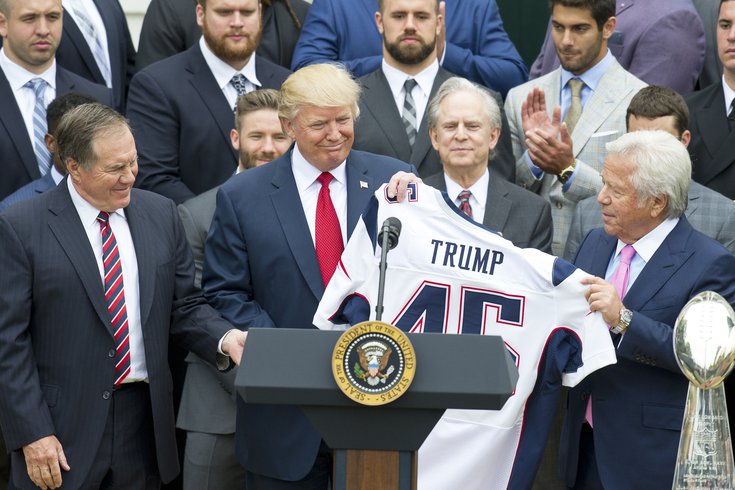 There are still a lot of unanswered questions when it comes to the Spygate saga that dominated the sports landscape back in the mid-2000s, when the New England Patriots were caught illegally videotaping opponents practices and, perhaps not so coincidentally, also winning Super Bowls.

Many of those questions remain unanswered for one simple reason: the NFL doesn't want you to know the truth — how pervasive the taping was, how big of a competitive advantage Bill Belichick's team gained, and who was directly involved. Not to mention — how would the 2005 Super Bowl have played out differently for the Eagles?

When it was first revealed that the Patriots were cheating, everyone was demanding answers. But no one seemed able to get them, not even the United States government. Then Pennsylvania Senator Arlen Specter, a lifelong fan of the Eagles, one of the teams wronged by the Pats in their Spygate scandal, was incensed and demanding the team be held accountable, but felt he was being stonewalled by not only the Patriots, but by the league as well.

"If it ever got to an investigation," commissioner Roger Goodell said at one point, according to a new ESPN story, "it would be terrible for the league."

The NFL machine began working overtime with PR spin and a media blitz, but it was enough to deter Specter, who was planning on bringing in coaches and front office executives to testify in something that resembled the Mitchell investigation into steroid use in MLB. And that was the last thing Goodell and Patriots owner Robert Kraft wanted.

That's when something interesting happened, according to a report from ESPN's Don Van Natta Jr. and Seth Wickersham, something that became even more interesting over the last half decade.

According to the report, Specter received a call from a longtime donor who was also a friend of Kraft's, and it included a bit of a quid pro quo.

"If you laid off the Patriots," the story says, "there'd be a lot of money in Palm Beach."

That call — according to Specter's son, Shanin, and the late senator's longtime communications adviser aide and ghostwriter, Charles Robbins — came from none other than former President Donald Trump, well over a half decade before he'd decide to run for office.

Both Trump and Kraft, through spookesmen, denied any involvement and with Senator Spector passing away in 2012, there's no way to get a definitive answer. But both Shanin Spector and Robbins say otherwise.

The story of "the friend from Palm Beach" stems from Robbins' 2010 meeting with Specter, which was tape recorded as the two were working on the senator's third and final book. Here's more from Van Natta and Wickersham...

Specter's interest in Spygate began in late 2007. Then the ranking Republican on the Senate Judiciary Committee, Specter wrote two letters to Goodell raising questions about the NFL's lightning-quick investigation. In September 2007, only four days after New England was caught taping the New York Jets' coaches' signals from the sideline, the league investigation ended when the commissioner fined the Patriots $250,000 and coach Bill Belichick $500,000 and confiscated the team's first-round draft pick. Goodell then briefly reopened the league investigation days later and ordered his most trusted aide, league general counsel Jeff Pash, to stomp a handful of spying videotapes to pieces inside a Gillette Stadium conference room. The punishments had been delivered before the evidence was collected and then quickly destroyed. To Specter and others, this looked, at best, like an amateur investigation or, worse, like a cover-up. And then Goodell did not respond to either of Specter's letters seeking an explanation. [...]

As he recited all of this to Robbins in 2010, Specter sipped a martini on the couch in his den and spoke about his lingering Spygate frustrations. Specter recalled that during a recent fundraising session, he had decided to call up "an unlikely candidate" but "illustrative of my chutzpah, bravado and self-confidence." He called Robert Kraft.

Surprisingly, still furious over Spygate, Kraft agreed to meet with Specter at 10:30 a.m. on Monday, March 15, 2010, in a hotel suite in Boston. Although Kraft says now through a team spokesman that the meeting "wasn't memorable," Specter told Robbins that the two men "had a delightful conversation," according to the transcript. "And he said, 'Let me get off my chest some things you did to the Patriots which were very unfair. Just very unfair.' I decided not to argue with him." Eventually, Specter and Kraft discussed the purpose of their meeting, campaign money, with the senator's hope being that Kraft and his company would contribute to his Senate reelection campaign.

The Kraft discussion led Specter to offer Robbins an intriguing aside about his Spygate investigation: "On the signal stealing, a mutual friend had told me that 'if I laid off the Patriots, there'd be a lot of money in Palm Beach.' And I replied, 'I couldn't care less.'" Although that exchange is published in Specter's 2012 book, the senator did not identify the powerful friend -- nor did he reveal in print that the friend had told him he was acting as an emissary of Kraft.

It became a fascinating footnote to the Spygate saga, one of many lingering unanswered questions: Who was the mutual friend of Specter and Kraft who had offered "a lot of money" for a powerful senator's Spygate investigation to be dropped?  [espn.com]

In 2017, Robbins said in an ESPN interview that he believed one of the possibilities for that mutual friend was President Trump, who has been linked together both in print, through political donations and even through another mutual friend: Roger Stone. Later, however, Robbins doubled down on Trump, and this time he said it with a bit more conviction.

In a subsequent conversation initiated by the reporter, Robbins offered more details: "I asked Specter, and he said, 'It doesn't matter, let's move on,' and I didn't press it." Robbins added that it had bothered him that Specter didn't trust him with the name. But in the end, it didn't really matter, Robbins now says: "I was pretty darn sure the offer was made by Trump. At the time, it didn't seem like such an important moment. Back then, Trump was a real estate hustler and a TV personality." [espn.com]

After hearing that, ESPN reached out to Specter's son, Shanin, who said at first was a bit hesitant but now seems much more definitive, according to the story.

"He was pissed," Shanin Specter says about his father. "He told me about the call in the wake of the conversation and his anger about it. ... My father was upset when [such overtures] would happen because he felt as if it were tantamount to a bribe solicitation, though the case law on this subject says it isn't. ... He would tell me these things when they occurred. We were very close."

He insists his statements today are not politically motivated, although he supported former Vice President Joe Biden's election bid last fall. And, to be fair, this wasn't a piece of information he took the initiative to reveal; he answered a reporter's follow-up questions after Robbins said more definitely that the friend who made the cash offer to Specter could only be Trump.  [espn.com]

Specter did not report the call to authorities and according to the ESPN story, election officials aren't entirely sure the offer rises to the level of a bribe that could be prosecuted. Furthermore, FEC filings reportedly don't show any donations from Kraft to Specter.

The story goes on to discuss Donald Trump's history with the NFL as well as Specter's longstanding disdain for the league's "preferred status" in America, including their antitrust exemption.

It's a story that's definitely worth your time — not to mention one that we weren't expecting in late May more than a decade after Spygate — and one that is a reminder that sports and politics never were and never will be separated.