Eytan Shander: Why is everyone terrified to be honest about the Eagles this season?

The team is going to stink as they try to figure out what's next, but you'll never hear them — or any diehard fans — admit that publicly. 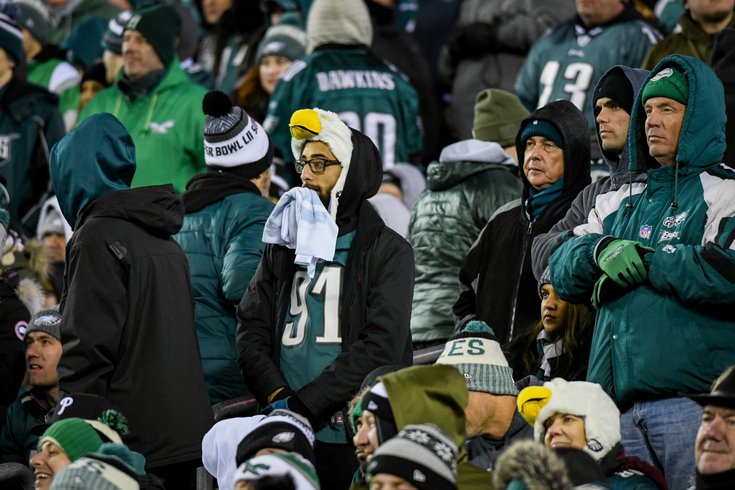 Defeated Eagles fans during the Philadelphia Eagles wild card game against the Seattle Seahawks at Lincoln Financial Field in Philadelphia on January 5, 2020.

Whatever the hell you call it, here’s one label we can smack on the upcoming season, “no confidence”.

That’s right, folks. The Philadelphia Eagles are coming into this season with the least level of confidence for a team since the last year of Chip Kelly. Think about how drastically different things were with personnel, how often you threw around terms like “uncertain” and “unwanted” and just how disgusted you were with Kelly himself.

Nick Sirianni clearly isn’t that, nor should he even be labeled anything close to that monster. That also doesn’t mean the team has zero confidence in his abilities long-term, and why should they? He just got here. It’s due to circumstances that put the new head coach – and a ton of other people – on the ground of the trust tree. They aren’t even climbing the trunk.

Look no further than the half-on/half-off commitment to Jalen Hurts. He’s their quarterback but he still has to compete for his job. But, according to Sirianni, “everyone” has to compete for their jobs. And we know there ain’t no way in hell that Fletcher Cox is competing for anything.

So why the misleading comments to justify a new mantra all to delay just naming a damn starter? Do you think there’s any gamesmanship going on right now with the Falcons? Of course not. It’s the team’s outright hesitation to commit to anything outside of the few obvious players like Cox.

With the Carson Wentz wounds still fresh, they are scared to death to come out and support Hurts because the kid may not pan out like they want. They are even more afraid to admit the latter, so they won’t even draw attention to the possibility of using three possible first-round picks to lure a top QB here.

It’s just a long and exhausting way around coming out and telling us they don’t know. They simply have no clue about the young players who just got here, the brand-new coaching staff, all the way through guys like Derrick Barnett in a contract year.

Look, the reality is that it's not all the Eagles’ “fault” that we are here. It’s not all on Howie Roseman or the owner in Jeffrey Lurie. But the refusal to admit what this is – especially to a fanbase that isn’t going anywhere no matter what – is kind of insulting. It’s truly exhausting.

You must be an idiot to think the Eagles aren’t in rebuild mode which opens doors and pathways to uncertainties about players. The defensive coordinator came out last week and said he doesn’t have schemes yet because he still doesn’t know what he has on the field. There’s a lot of truth to that with so many brand-new parts to this machine.

What league are you watching where new coaches and players just magically come together in the offseason? Or mid-season? This year is a total wash. It’s meant to figure things out because they really have no idea how longterm any of this can be. They aren’t locked in to really anything that can hurt them, even Andre Dillard.

The problem I have isn’t with the team throwing so many young components on the field, including a brand new first-round wideout in DeVonta Smith, but rather this approach to the year like that’s not the case. Again, if the powers-that-be were brand new to this city and the fans, maybe – just, maybe – I could cut them slack. I’m sure Josh Harris was nervous about Sam Hinkie’s plan (once someone explained it to him like a 5-year-old) so it stands to reason that could be the case here.

It’s not. Not even close.

The biggest bluff in the history of Philadelphia sports would be this year’s Eagles team coming out and telling the fans, “Hey, this is a gap year, we have no idea what we are doing past this year.” Dare the fans to sell tickets, PSLs, and anything else they own.

Instead, we tiptoe around what this season is or may become, even though there are way too many signs in front of us. If the Eagles' owner wants to take a year off and backpack across Europe or write a screenplay, just tell us. There are thousands of people waiting to take anyone’s spot who bails as a result. It would be a refreshing change of pace in how we are treated by front offices all around.

[Warning: Potential spoilers below for Episodes 1-6.]

We have reached the final episode of the HBO limited series and I wanted to revisit some earlier thoughts. The series is good. Better than Nicole Kidman’s brutal show and better written than Bryan Cranston’s "Your Honor."

To quote a famous divorce lawyer you may hear on the radio, “But that’s OK.” The writing has taken over as the true star of the show, which is great because it takes focus away from the forced accents. Kate Winslet is solid, and the supporting cast does just that with the show. Episode 6 saw a shift back to a slower pace, especially after the harrowing scene of captives, escape and death that ended episode five.

The show is at its best when it’s developing characters. It struggles when it mismanages time and runs through plot development. There’s no reason why we needed two separate cliffhangers heading into the final episode. The show already set up both the previous week. They can’t expect to drag out people’s reaction to the photo and lead us to Billy two times over as a suspect.

I continue to walk away impressed with how easy the dialogue is on this show, partly because of the acting, the other a result of the writing. You may take it for granted but it’s not easy to write as we talk, or even as we think we talk. "The Wire" ultimately mastered how to capture he true essence of dialogue, specific to who is talking and what culture they represent.

Emotions don’t come easy to us either, as captured perfectly by Mare and Dawn hugging after Katie’s return. This is the show at its best moment, although it won’t be memorable. Maybe I’m hanging with Barrett Brooks too much, but that scene is the unsung hero – the offensive lineman, if you will – of the show.

There were so many ways to force it, make it seem so Hollywood, or make it cold and sterile as some weird twist. Instead, we got what might as well have been improv — it was awkward, difficult and natural.

Unfortunately, the ending of Episode 5 was the most action we’ve seen all series. I’m not complaining that we didn’t see more bloodshed, but rather the way they presented that bloodshed.

While it’s hard to think the shady bar is totally out of the picture – think the poker game referenced by Katie – we still got an expedited ending. That ending was also a line-by-line homage to Silence of the Lambs. It’s hard for me to not correlate the two; thinking about how rushed the ending was and how little the writers had to work for it. They didn’t even “re-tool” it!

Here’s the weird thing about this show that I truly don’t know as I sit here ahead of the finale: I have no idea which obvious direction the show will go with on Sunday night. Do we go down the path of "The Undoing?" Everything can’t be as simple as it seems, right? But it turns out to be just that. “Hey, it was the sleazeball we thought all along!” leaves little lasting satisfaction in the belly.

I still can’t get over how ridiculously stupid that plot arc was, not to be topped by the helicopter scene at the end of the series.

The other way "Mare" can end would be Johnny taking Billy up to kill him, as we have been led to believe with ridiculously obvious foreshadowing. Billy is just protecting something larger, which could be his brother, or maybe a ring out of the bar. I hope I’m wrong and it’s a third option, most likely involving Lori or Dylan (way too obvious), but I’ve been wrong before, just look at some of my betting advice.

We opened the week talking about the NBA Playoffs, Joel Embiid, Sixers, LeBron, Russ stepping out, and about 50 more things from the weekend.

We recommend you bookmark phillyvoice.com/themiddle and catch us M-F 11-1p