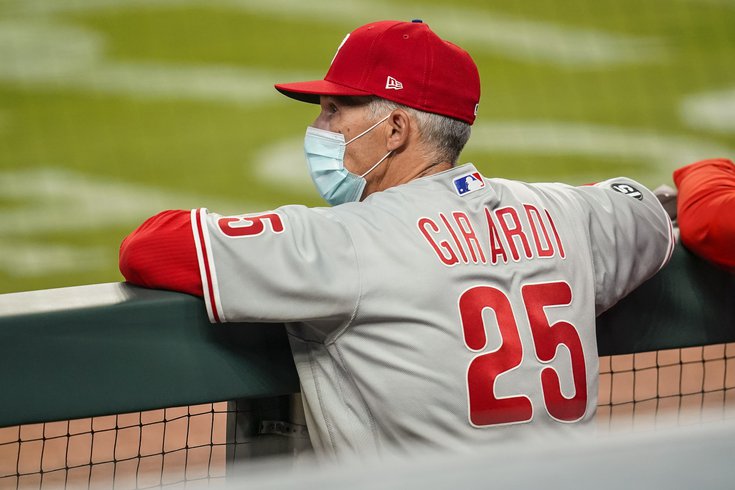 It’s the phrase made popular by Drew Rosenhaus, now used at press conferences around the world. It’s a normalized phrase to keep the “presser” moving and reminding the media – and public – who is really in control. This — in its most reduced element — shows just how unnecessary your quests for truth have become.

There’s obvious absurdity in Joe Girardi trying to “next question” his way to the end of Sunday’s press conference. Acting like Jim Salisbury was the only person to see an altercation in the dugout was a ridiculous failure of judgement by the Phillies' skipper.

The story refused to die as you needed something to talk about Monday morning. No way the Sixers-Magic game was going to lead the way. Instead, the target was placed squarely on Girardi’s back for – get this – not answering the questions about Jean Segura.

You jumped all over him; called a radio show, tweeted the Phillies, or shouted from your roof as loud as possible. Whatever you could do to demand accountability from Girardi regarding this altercation. You even went so far as to question – once again – if Gabe Kapler would be a better fit here.

Make no mistake, this isn’t only a negative reaction – or over-reaction – you tend to have when it comes to press conferences. Nobody gets pandered to easier than the Philadelphia sports fan. Not because of any naivety, if only it were that easy. It’s more a case of you rather enjoying it!

It took about two weeks and as many press conferences for Nick Siriani to win back the room, and the city for that matter. Because of what? His getting a better handle on answering questions? The leaps of faith you built off something as simple as the new head coach’s growing comfort behind a zoom camera were – well, to be honest – insulting.

He played Rock, Paper, Scissors with kids he eventually drafted. Doug Pederson couldn’t work the headlights on his rental car. Owning a press conference didn’t change either of those facts. Winning a game will.

You know this. Why do you insist on pulling some larger truth from a zoom call, be it one man unable or unwilling to talk about an altercation to another who’s so hopped up on Honey Smacks that his energy just “exudes” winning? I could let this go if you didn’t keep bringing it back up each time we have one of these moments. Nobody wins a press conference, they may lose one in your eyes, but nothing bad on the field comes from ignoring or bypassing a question. Girardi probably did more to help his relationship with Segura by not publicly blaming or trashing him. Siriani knows all too well that any zoom call or draft tricks won’t affect his command of the locker room.

You know this too!

I’ll never understand taking anything away from any press conference that’s not immediately after a game ends. Even then, as we see with Girardi, not everything is worth a reaction. Not from Jim Salisbury, nor from his question. It’s the reaction to the reaction that always leads to absurdity. It’s reacting to Girardi’s reaction to Salisbury, or how Siriani — suddenly — commands the room, or how a new player can wear a T-shirt or mention a cheesesteak spot and melt into your hearts.

The Phillies will have a long trek ahead trying to keep the wheels on while competing in the division. It’s no secret the Eagles will be climbing uphill mostly all next year. I’ll get mad with Girardi handling players in the dugout after I get through the season, and how he handled actual stuff that matters. I’ll give a rat’s behind about how cool Nick Siriani sounds on zoom once they win a couple of football games.

I am approaching 25 years in and around this city. I am raising a family here. I chose to come back here multiple times after moving away for work. Philadelphia is and will be my home. I stand with you and speak up for you on my bigger platforms, but in this case, I must exit stage-left.

It’s all about LeBron James. Take the Lakers up to -8.5 against the Warriors on Wednesday night. You have a day and a half to place this wager, so no excuses if you don’t make it before tip… on Wednesday night!

In the world of sports betting, we are blessed every now and again with what I call a “Narrative Bet.” It’s a gift in this case because the most obvious conclusion is the easiest to accept. One of the best players in NBA history is not going to lose in the first ever play-in game. That’s it. It’s that simple.

You don’t need a ton of metrics or data on how the Lakers have been playing as of recent. You certainly don’t need the last 10 matchups between the Warriors and Lakers. You really don’t even need to know who is healthy around LeBron – and AD – to figure this one out.

This is one of the lowest points in LeBron’s career – and I say that as a huge fan of his work on the floor. He is in the same breath as MJ, Wilt, Kareem, Kobe, and anyone else you want to claim as the best to ever play. Can you imagine sports talk radio after LBJ loses in the play-in game?

I can hear it now, “MJ never had to play-in the playoffs!”

All that’s missing is Chris Russo yelling about Bob Cousy in the background.

If the obvious narrative isn’t enough, try this one out for size. The NBA won’t allow its top money-maker to fail this early in the playoffs. Conspiracy theory? Yes. 100 percent. I don’t care how it’s done, but the Lakers are going to cover a 6–7-point spread. They will lock in the 7 seed and take on Denver, probably beating them in the actual first round.

Let’s let one thing happen before we start betting on that series, but this is one of those rare cases in betting where the application of Occam’s razor works. Steph Curry played over his head and helped lead a banged-up Warriors team this far, but he isn’t nearly as important to the NBA as LeBron is. It’s the simplest solution; the Lakers won’t lose a play-in game.

Maybe you didn’t hear me? The Lakers aren’t losing. Watch me double – or triple, maybe – down on LeBron winning their play-in game.