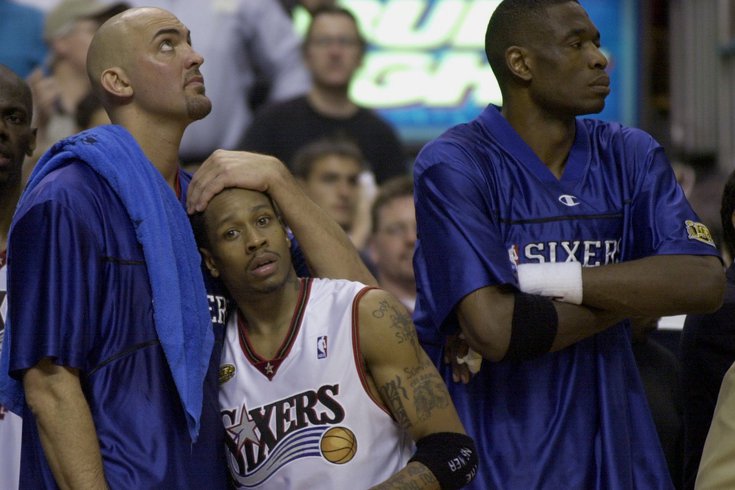 The Sixers ran out of gas by the time Game 5 of the 2001 NBA Finals rolled around, and you could afford nothing less than your best against the dominant Lakers team of that era. Closed out on their home floor, the Sixers lost 108-96 and watched their dream season come to an end.

Here's what I saw 19 years later. Thanks for taking the journey with me.

• As time passes and people view him strictly through the lens of box score stats and Basketball-Reference pages, my fear is that Allen Iverson will be lost in the sands of time. Little kids will point to his field goal percentage, a number that admittedly was not good in this series, either, and conclude he was an overrated chucker.

Rewatching this series, the biggest takeaway for me is regret over how Iverson's career in Philadelphia played out. He was one man trying to push this large, unremarkable boulder up a steep hill, and he managed to push that rock within view of the summit. This Sixers team had absolutely nothing going on offense except for this little guy, and he found ways to score anyway, hoisting jumper after jumper and taking punishment in the paint as many times as it took to get the job done.

By Game 5, Iverson's body could not keep up with his mind. After a collision with Kobe Bryant that earned him his third foul in the first quarter, Iverson favored his right side the rest of the night, with the broadcast reporting he had mouthed the word "ribs" to the training staff between plays at one point. Each time he hit the floor, he seemed to get up slower, and even with his body failing Iverson still came up with several individual scoring runs to try to claw back into the game.

There was no doubt when this series had ended that Iverson had given the team and the city of Philadelphia everything that he had. For years after their loss to the Lakers, management tried and failed to find him a suitable second star, leading to his eventual departure to Denver when all was said and done. Iverson flaming out relatively early compared to other greats has been used to degrade him in hindsight, but he was let down by other people long before he had the chance to let his later teams down.

Do I have a soft spot in my heart for Iverson because he was one of the people who inspired my love for basketball? Absolutely. Would he have benefitted from an eventual adjustment to his style? Absolutely. But the Sixers tried to turn him into a score-first (and at times, score-only) shooting guard, surrounding him with players who did nothing to help him

• Salute to Tyrone Hill, who waited until everyone else on the team had run out of gas to play his first good game of the series. Talk about having a sense of the moment.

• Early on in this game, there was a glimpse of the difference between an elite team with championship pedigree and experience and an elite team for one season just finding themselves on a big stage. On the very first offensive possession, Allen Iverson was stripped by Derek Fisher, and rather than allowing him to go the other way, Iverson used the opportunity to take a frustration foul and chide the officials. Minutes later, Iverson would swipe at Shaquille O'Neal on a double-team attempt and pick up his second foul, and then compound the issue by earning a technical with his reaction to the call.

Iverson would end up playing the rest of the game in foul trouble, and though he still had his moments on defense, it hampered his ability to play with the sort of effort and energy that they needed on that end. Neither play offered any real value to the Sixers, and Iverson allowed those calls to get the best of him. As the underdog, these are the sort of moments and mistakes you simply can't afford to make.

Looking back, this may have been the biggest difference between Game 1 and the rest of the series. On the road with nothing to lose and everyone expecting them to get blown off of the floor, Philadelphia's poise was apparent. Once the series got real, the Sixers slowly but surely lost that mental toughness, and it was a major part of their undoing.

• I will continue to stress this in spite of O'Neal's comical numbers from this series: Dikembe Mutombo's effort guarding the Finals MVP is a lot better than I remembered. Unfortunately, as I think more people are aware of now than they have ever been, defense is about more than just winning one-on-one battles over and over again, and Mutombo's defensive focus on Shaq robbed the Sixers of help defense they needed throughout the series.

Doug Collins hammered on this point throughout the series, including in Game 5, but Mutombo played paralyzed in fear of leaving O'Neal whenever the Lakers got some dribble penetration going toward the basket. His work protecting the rim against Kobe Bryant and Co. in Game 1 was the exception to this rule, but as the series wore on Mutombo wasn't even making real attempts to make weakside recoveries, knowing that would mean leaving O'Neal for an open dunk on a pass or an easier offensive rebound. They got the worst of both worlds in that regard — O'Neal still came up with tons of boards and buckets anyway, and even role players like Rick Fox were able to get to the rim and finish without much resistance.

If the Sixers had stuck with Theo Ratliff (in a universe where he didn't get hurt that year) over Mutombo, O'Neal likely has an even more ridiculous series than he had. But Ratliff had the foot speed and willingness to make those recovery plays, the legs to run and score in transition, get up for lobs in the halfcourt, and additional offensive options to help out Iverson in times of need.

• I simply don't believe there's a version of this series the Sixers could have won with Aaron McKie playing this poorly. Their Sixth Man of the Year simply had nothing left to offer by the time Philadelphia reached the Finals, and no individual performance hurt them as much as McKie's.

McKie's offensive failings in this series have been discussed over and over again in this space, but Game 5 is when he finally let go of the rope on defense after struggling to contain Kobe Bryant throughout the series. Forget Bryant, McKie could not consistently stay in front of Rick Fox in the final game of the series, who forced McKie into several cheap personal fouls on drives after beating him with minimal effort.

The playmaking McKie had used to boost the second unit was on display in very short bursts in this Friday night defeat, but this was a nightmare series for him.

• Asking these Sixers to play like the Seven Seconds or Less Suns or today's Houston Rockets would have been a silly exercise with the way they were constructed. But the thing that jumps out about the rosters for these two teams are how differently they were built around their best players, and how much easier of a time Shaq and Kobe had than Iverson did.

With Bryant preferring the mid-range and O'Neal wanting the ball as close to the basket as he could get it, the Lakers made sure to put players around them who could provide as much space as possible and serve as outlets when double teams eventually came.  The Lakers shot 48 percent from three on 15 attempts per game for the series, and while that may have been shooting above expectations, many of those shots came by design, with the Lakers waiting for the big fella to find them out of the post.

The Sixers had a player whose own best work was done inside the arc, but the surrounding personnel were not equipped or instructed to help him in the same way. Iverson's ability to collapse the paint helped him generate trip after trip to the free-throw line, but it left him drawing dead against a big, physical defense like L.A,'s, and his best outlets were to guys who were often stationed as closely as 15 feet away. This is not surprising when you consider the best shooter they had that year was Toni Kukoc, who was sent packing as part of the deal that brought Dikembe Mutombo to Philadelphia.

For the series, the Sixers shot under 29 percent from three on a shade under 12 attempts per game, with L.A. outscoring the Sixers from beyond the arc by a whopping 57 points, a difference larger than the total number of points (51) the Sixers accumulated on threes in five games. The total difference in the four losses was just 40 points.

The Sixers were resilient as any team in the league that year. They could not overcome basic math.

• Bless George Lynch for trying to come back and help the team, but there was no better picture of the toll this playoff run took on the 2001 team than Lynch returning with a broken foot and then immediately picking up another issue (a sprained toe) in the final game of the season, with this one ending his night and his season.

Philadelphia coming through with Game 7 wins in back-to-back series was great theater, and added to the myth of Iverson's 2001 season. But the physical and mental cost of that long playoff run was obvious by the middle of their series with L.A. The Lakers were able to throw counter punches to Philly's best stuff over and over again, and Philly would eventually run out of ways to fight back. Take nothing away from the season and the guys who got them there, but the journey proved too costly in the end.

• I will say this about Shaquille O'Neal, who was clearly the best player in the series and deserved the Finals MVP — he was not as hard to officiate as the broadcast made it sound or officials made it look. If you elbow the guy guarding you in the face as you go up to shoot or dunk the ball, it is a foul. That seems to be a pretty obvious thing that the officials were not sure of throughout this series.

Hell, NBC even showed a freaking montage during this game showing three different occasions where O'Neal threw his arm into Mutombo's face — one that was a no-call, one that was an offensive foul, and one that resulted in an and-one for O'Neal. And then O'Neal earned another and-one opportunity in the third quarter of Game 5, smacking Mutombo in the grill pretty good.

The broadcast being in standard definition doesn't mean the vision of the officials should have been such an issue, and O'Neal's physicality being hard to officiate doesn't mean so many of these calls should have been botched. If there was anybody in the league who didn't need help, it was this guy at the peak of his powers, and he got plenty in this series.