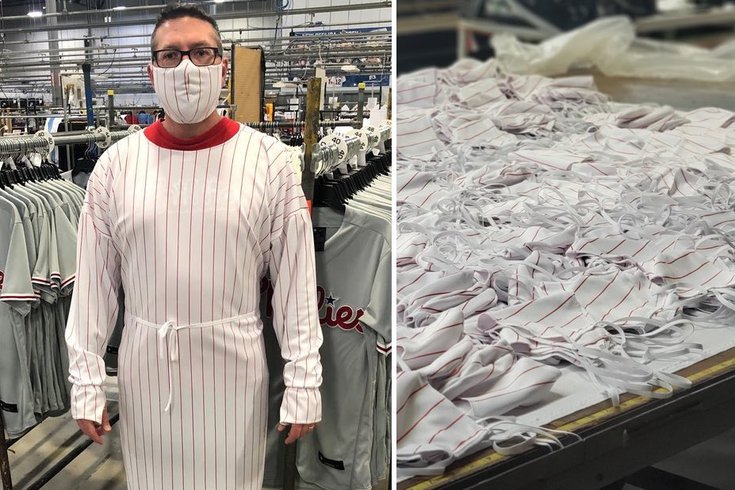 Sixers limited partner and Fanatics owner Michael Rubin announced plans to repurpose a local Fanatics factory on Thursday, taking materials that would have been used for MLB jerseys and instead using them to fight back against the COVID-19 pandemic.

Sharing a picture of a man in a medical mask and gown with red Phillies pinstripes, Rubin provided details on how this idea unfolded, allegedly sparked by an idea last week and brought to reality following conversations with Pennsylvania Governor Tom Wolf and Attorney General Josh Shapiro, who Rubin says called on him to help with the supply shortage for frontline healthcare workers.

Woke up in the middle of the night last week with idea of converting our @Fanatics factory in PA that makes official @MLB jerseys into a facility that makes much needed masks and gowns and then donating them to help fight this horrendous virus. pic.twitter.com/r6FAxUdlgH

Fast forward to today – @Fanatics and @MLB have halted production of all MLB jerseys and instead using that same fabric we make the jerseys with to make masks and gowns!! We have approx 100 associates working (extra distanced and in a very clean and safe environment of course) pic.twitter.com/E8ewI0REfn

Thanks to @MLB Commissioner Rob Manfred for not only agreeing to halting production of MLB jerseys, but also doing everything possible to make this happen as quickly as possible!!

And thanks to our incredible associates who raised their hands and wanted to be part of the effort to help the frontline heroes in this war stem the spread of the virus!! pic.twitter.com/GcZXTTcraq

It has been a tumultuous week for Rubin, a "limited partner" with the 76ers, and the rest of the ownership group, following their decision to reduce salaries for at-will employees of the Sixers and Devils making $50,000 a year or more. Less than 24 hours following reports on the subject, Sixers star Joel Embiid committed $500,000 to the COVID-19 relief effort, in addition to offering support for impacted employees with the Sixers, only for the team to pivot out of the financial change and maintain status quo.

"After listening to our staff and players, it’s clear that was the wrong decision," Sixers managing partner Joshua Harris said in a statement Tuesday. "We have reversed it and will be paying these employees their full salaries. This is an extraordinary time in our world - unlike any most of us have ever lived through before - and ordinary business decisions are not enough to meet the moment. To our staff and fans, I apologize for getting this wrong."

According to Shams Charania of The Athletic, Rubin was reportedly upset at the initial decision from the managing partners to reduce employee salaries, though prior to the team's reversal, there was no public pledge of his own financial support to impacted employees. Sixers employees who spoke to PhillyVoice this week noted that spouses and family members from other industries had been aided proactively by their companies, either through bonus payments or commitment to full pay moving forward, and many employees continue to watch the rest of the league closely, as other owners make their own decisions on payment structures during the league's hiatus.

In any case, Rubin's decision to repurpose the Fanatics factory comes at a time where hospitals around the country are struggling to deal with (or brace for) the widespread impact of COVID-19. Concerns have arisen about the availability of basic safety supplies, like masks and gloves, in addition to more costly equipment (e.g. ventilators) that are critical in responding to the outbreak.

On March 18th, President Donald Trump invoked the Defense Production Act, a federal law passed at the start of the Korean War in 1950 meant to give the government more control over industrial production during emergency and/or wartime situations, but as of this writing has declined to put it into action as a method of attacking supply shortage.

In the city of Philadelphia, hospitals are not only dealing with a supply shortage but a potential space shortage. Mayor Jim Kenney announced on Thursday afternoon that the city had ended negotiations with the owner of the Hahnemann Hospital building to use the site for potential patient overflow, claiming the costs would have risen to about $1 million per month between rent and renovations. Hahnemann closed last summer due to bankruptcy.