Sixers' Joel Embiid supports Karl-Anthony Towns, whose mom is in coma with COVID-19 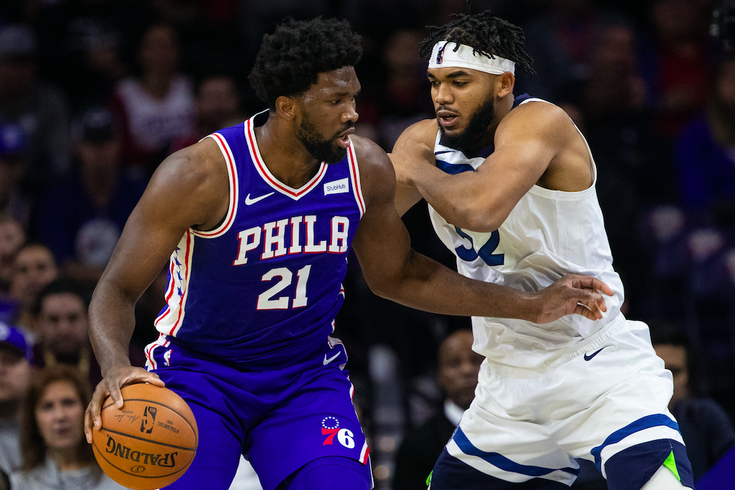 Philadelphia 76ers center Joel Embiid reached out to Minnesota Timberwolves star Karl-Anthony Towns after he announced his mother was fighting for her life with the coronavirus. Towns, a New Jersey native, scuffled with Embiid back in October during a game at the Wells Fargo Center.

Nearly six months ago, the bad blood was unmistakable between Philadelphia 76ers star Joel Embiid and Timberwolves big man Karl-Anthony Towns. The two got into a fight during a game in October, followed by a vicious exchange of insults on social media.

Times have changed since the coronavirus pandemic forced the suspension of the NBA season earlier this month.

After midnight Wednesday, Towns shared an emotional message in which he revealed his mother, Jaqueline Cruz, is critically ill with COVID-19 and has been placed in a medically-induced coma.

Sharing my story in the hopes that everyone stays at home! We need more equipment and we need to help those medical personnel on the front lines. Thank you to the medical staff who are helping my mom. You are all the true heroes! Praying for all of us at this difficult time.

Towns, a native of Edison, New Jersey, said both of his parents fell ill last week. He urged them both to go the hospital, where his mother's fever hit 103 degrees.

After several days, when it appeared Cruz might have turned a corner, she became seriously ill again. Towns' father was quarantined at the family home. It was not clear from the video whether the family lives in New Jersey, one of the hardest hit states in country.

As her condition deteriorated, Towns' mother was placed on a ventilator and later in a medically-induced coma. She is still fighting for her life.

In response to the tragic news in Towns' family, Embiid tweeted Wednesday in support of his fellow NBA star.

Embiid announced yesterday he was donating $500,000 to COVID-19 relief efforts, including support for those impacted within the Sixers organization.

While animosity and tensions can run high on an NBA court, issues like this illustrate that players are united in supporting each other during a chaotic and frightening time for people around the world. Here's hoping Towns' mother makes a full recovery.