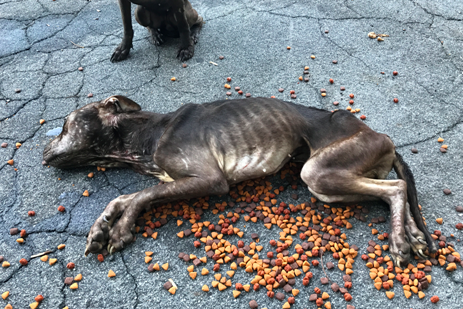 Humane law enforcement officers are seeking help from the public to track down those responsible for dumping two wounded and badly emaciated pit bulls in an Upper Darby park over Labor Day weekend.

Injuries to both of the dogs, Gracie and Layla, show clear signs that they were involved in dogfighting for a period of time prior to their abandonment, said Russell Harper, a spokesperson for Justice Rescue, the shelter handling the investigation.

"Definitely," Harper said of the dogfighting evidence. "One of the most heinous things about this case is that they both have multiple biting and healing points. They have old scars and some that are recent. When it comes to emaciation, that's not something that happens overnight."

The dogs were discovered by a passerby early Monday morning, left immobile in a lot at Penn Pines Park. Dog food was scattered around Gracie's body.

Harper said Justice Rescue picked up both dogs shortly after receiving word of their abandonment. They are approximately two years old each and severely underweight. Both are in critical condition, according to a statement from the rescue.

The shelter is offering a $1,500 reward for anyone who can provide information leading to an arrest and conviction. Charges in the case could potentially rise to the level of a felony.

"We're following up on a few tips and some evidence that may be useful. It's still being processed by labs," Harper said. "We're still investigating and we need all of the help we can get."