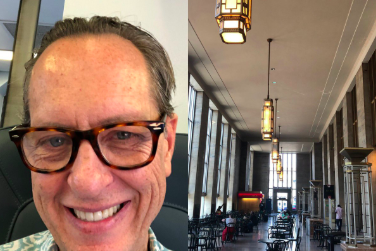 Richard E. Grant tweeted that he arrived in Philadelphia this week to start working on Jason Segel's AMC anthology series, 'Dispatches from Elsewhere.'

Oscar nominee Richard E. Grant is about to start filming a new project in Philadelphia — and our eyes are peeled looking for him.

The British actor tweeted that he arrived here on Monday, most likely to start work on Jason Segel's 10-episode AMC anthology series, "Dispatches from Elsewhere."

Grant, who was honored last year for his supporting role in "Can You Ever Forgive Me?" opposite Melissa McCarthy is both a cherished on-screen actor and social media presence to his devoted fan base (this writer included). His posts during Oscar season were heartwarming in their sincerity, particularly when he met his idol, Barbara Streisand.

The British actor has taken to social media recently about the Philly project, and even posted a photo of 30th Street Station on Wednesday morning.

"Time off before filming starts in Philadelphia," he wrote.

Time off before filming starts in Philadelphia- taking the train up to New York 🍏 pic.twitter.com/XsbHhOlwti

Based on his posts, it looks like he arrived here on Monday and won't begin filming until later this month.

‘Parting is such sweet sorrow’ - Philadelphia bound and much as I love starting a new project, leaving home is always painful. My wife & I have been together for 36 years. pic.twitter.com/eH1Mhukgod

Grant is in Philly to film the Segel's series "Dispatches from Elsewhere," which we reported earlier this year when the creator was spotted wandering Center City and meeting some locals. "Dispatches" was greenlit for production in July 2018 and is reportedly about "a group of ordinary people who stumble onto a puzzle hiding just behind the veil of everyday life."

The fanfare surrounding Segal's arrival has somewhat died down, but Grant's announcement means that other collaborators on the project — which also reportedly includes Sally Field and Eve Lindley — may appear soon, too.

Despite our reputation for being a celebrity desert — save for the occasional Kendall Jenner spotting, but those days are over — Philly has become a hot spot for roving celebrities this summer. Did you hear rapper André 3000 is walking around town playing the flute?