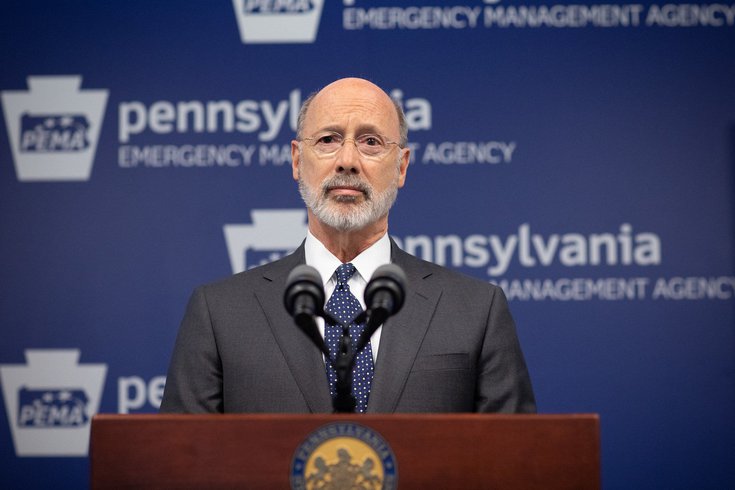 Gov. Tom Wolf is among those calling for Philadelphia NAACP leader Rodney Muhammad to resign for sharing meme on Facebook that disparaged Jewish people and mistakenly quoted a neo-Nazi.

Pressure is mounting on Philadelphia NAACP President Rodney Muhammad to resign amid a controversy that started when he shared an anti-Semitic meme on Facebook last weekend.

Muhammad, who has led the Philadelphia chapter of the NAACP since 2014, posted a cartoon depicting a caricature of a Jewish man holding down a mass of people, with a shiny ring on one finger. A quote falsely attributed to Voltaire said, "To learn who rules over you, simply find out who you are not allowed to criticize."

Above the cartoon were images of Eagles wide receiver DeSean Jackson, rapper Ice Cube and TV host Nick Cannon, all of whom recently faced backlash for sharing or endorsing anti-Semitic views.

Muhammad, 68, removed the post when confronted by a Billy Penn reporter, pretending at first that he didn't remember sharing it. The civil rights leader, originally from Chicago, previously has stood behind Nation of Islam leader Louis Farrakahn when he faced criticism for repeated anti-Semitic comments.

In a statement issued Monday through the national NAACP, Muhammad acknowledged the quote had previously been used by white supremacists. He did not directly apologize and instead claimed he was attempting to start "a dialogue around criticism and understanding."

There was no indication from Muhammad or the NAACP that he would be leaving his position.

"I stand with all members of the Jewish faith in the fight for social justice, and I intend to use this opportunity for thoughtful conversations with both the Black and Jewish communities," Muhammad said.

On Tuesday, the Jewish Federation held a virtual call bringing together Black and Jewish leaders to discuss the incident. The organization called on the national NAACP to immediately remove Muhammad from his position.

"Hate speech and the repulsive, purposeful spread of anti-Semitic imagery and messages can never be tolerated," the Jewish Federation said. "It is important, now more than ever, for Jewish and Black communities to unite and work together to combat racism and bigotry in all their forms."

The Pennsylvania State Conference of the NAACP strongly condemned Muhammad's post, but said it is up to the national organization to take action against him.

In a tweet, Pennsylvania Gov. Tom Wolf joined the call for Muhammad to resign.

Sharing this type of racist content is unacceptable—especially from a civic leader.

I’m joining the call for Minister Muhammad to resign. Hate has no place in Pennsylvania.

Philadelphia Mayor Jim Kenney, who employed Muhammad as a paid consultant for his re-election campaign, called for an apology but stopped short of demanding a resignation.

"Our city and nation need healing and unity now, not the sort of division and hatred that this post creates," Kenney said. "I call on Minister Muhammad to apologize to our Jewish community and to all those who fight every day for religious and racial tolerance. I know Minister Muhammad to be a bridge builder, and I hope he is up to the task of rebuilding the bridges that his unfortunate post has now damaged."

As soon I learned about Rodney Muhammad’s post I reached out to him directly to understand what happened and ask for a sincere apology.

His response to me was offensive and we are all still waiting for that apology. He has undermined the progress we need to make together to combat anti-Semitism and structural racism that has been baked into our society through generations.

That is just one reason why I join so many Black leaders in calling on Rodney Muhammad to resign as President of the Philadelphia NAACP. The NAACP is a crucial civil rights organization that deserves better than Rodney Muhammad.

"If we are all equal before the eyes of God regardless of our religious affiliations or orientation, then there is no manner of human dignity that would support that illustration," Williams said.

The national NAACP had not addressed calls for Muhammad's resignation as of Wednesday afternoon.