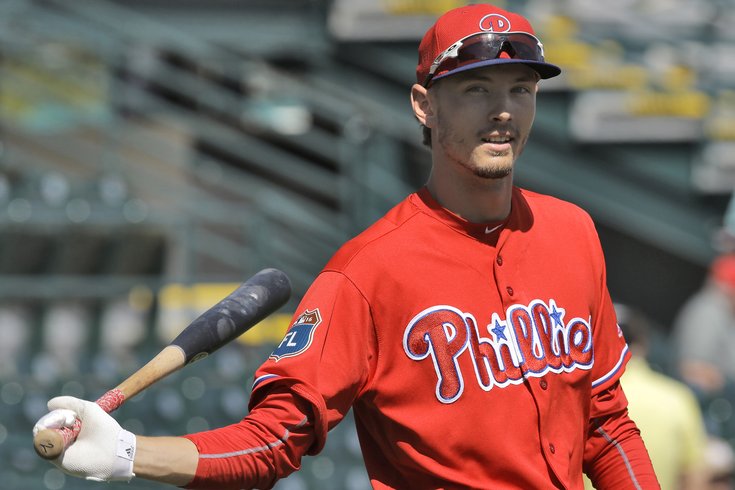 CINCINNATI – The Phillies head out of Cincinnati in a little more than 24 hours and are hoping to get out of town with at least one win (as long as the weather cooperates).

The second lineup of the 2016 season looks a bit different than the first one, but, that’s exactly what was expected against left-hander Brandon Finnegan.

Lineups at GABP, where rain is scheduled. And a game, too. pic.twitter.com/gvR0W0x48R

Cameron Rupp, expected to be the starting catcher this season, makes his 2016 debut. And the platoons are underway, with fellow right-handed hitters Darin Ruf and Tyler Goeddel in the starting nine, too.

Goeddel, 23, had a somewhat ordinary spring. But he has a real opportunity to play himself into regular playing time in an outfield ravaged by injuries this spring. Goeddel is strong defensively, and could surely prove to be a more worthy bat than Cedric Hunter and Peter Bourjos if he is able to hit like he did in the Southern League (Double-A) last year.

But the Phillies aren’t just trying to keep one Rule 5 pick around this year, but, two, with hard-throwing left-handed reliever Daniel Stumpf. Is it possible that they can keep both on the 25-man roster until September (when rosters expand)?

“I'd like to think so,” manager Pete Mackanin said. “They’ve both shown enough ability where they can be part of the future. Starting last year we went in to this rebuilding phase. Might call it an experiment last year. This year, a year further, we're going to find out what we have going into next year. While we're doing that, we're hoping to win more games.

“We think Stumpf and Goeddel could add to that. If not, they're both young enough where we have something down the road whether it's later this year or next year. It's hard to turn away young talent and that's what our goal is, to keep them.