Thome to be inducted into Phillies Wall of Fame 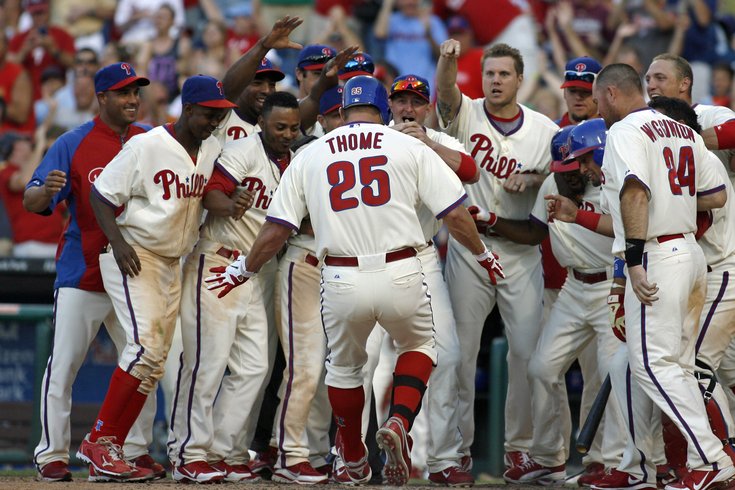 Jim Thome and his Phillies teammates celebrate a walk-off home run during the 2012 season.

CINCINNATI – The best thing that could be said about Jim Thome’s somewhat short stay in Philadelphia?

He made baseball fun again in South Philly.

The Phillies will celebrate Thome’s four seasons with the team this summer during alumni weekend. He was announced as the 2016 recipient of Phillies Wall of Fame honors.

Thome will be the 38th member of the Wall of Fame.

“It is extremely humbling and gratifying to be given this honor by the great fans of Philadelphia,” Thome said. “I always enjoyed playing here, and to join the generations of Phillies’ greats on the wall is just so special.”

Thome, 7th all-time in baseball history with 612 career home runs, is a lock to be elected into the National Baseball Hall of Fame when he becomes eligible in 2018. His stay in Philadelphia was not long (391 games in parts of four seasons) but it was surely impactful.

With a new ballpark a little more than a year away, the Phillies signed Thome to a six-year, $85 million deal as a free agent in December of 2002. They couldn’t have picked a better, more marketable player to take into Citizens Bank Park.

After leading the league with 47 home runs in his first year with the team at Veterans Stadium, Thome hit 42 home runs in the Phillies first season at Citizens Bank Park in 2004 and represented the team at the All-Star Game. On June 14 of that season, he hit his 400th career home run in South Philly.

Thome returned to the Phillies in 2012, hoping to acquire the championship ring that he wasn't ever able to attain during his illustrious career. During his short stay in 2012, Thome became the fourth player in MLB history to hit 100 home runs with three different teams, and also set an MLB record by hitting his 13th career walk-off home run.

But his second stint was limited to 30 games; Thome was traded to Baltimore later that summer, where he finished his career. Thome hit .260 with 101 home runs and a .925 OPS in four years with the Phillies.

Thome, who currently works in the Chicago White Sox front office as a special assistant, will be enshrined with the greats in Phillies history on Friday, August 12, prior to the team’s game against the Colorado Rockies.