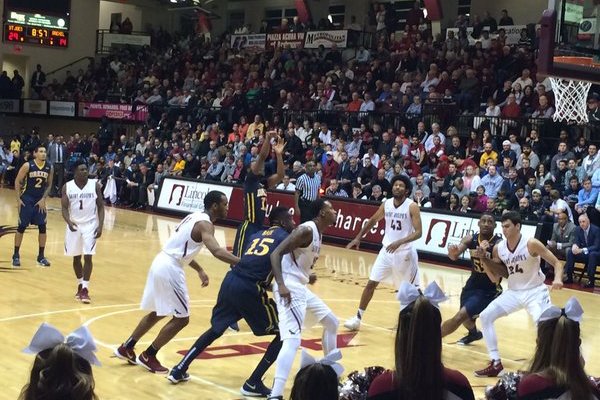 Hawk Hill on a Friday night.

Once Drexel head coach Bruiser Flint got T’d up in the first half on Friday night at Hagan Arena, the City Six finally felt like it was officially back in business. And yes, despite the Saint Joe’s student section’s best efforts (“Big Five rejects” was the chant), Flint’s team is very much a part of Philly college hoops.

Five of the City Six were in action on Friday night — Temple was smoked by top-ranked UNC in Annapolis, ‘Nova breezed past Fairleigh Dickinson at the Ski Lodge, and the Steve Donahue era got off to a 1-0 start with a one-point win over Robert Morris (aka “Bobby Mo”) at The Palestra — but Saint Joe’s/Drexel at Hagan Arena was the only matchup that featured two local teams. So that was the obvious choice.

Behind balanced scoring and a 23-point effort from star DeAndre Bembry, SJU held off Drexel 82-81 in their own gym. Outside of the crazy 52 total fouls that turned the game’s flow into something resembling rush hour traffic on 76 (which we’ll write about another time), here are a few Hawk-centric takeaways:

1. Good, not great start for Bembry: Earlier in the week, Phil Martelli said that all 30 NBA teams might have been represented on Hawk Hill if Damion Lee was matched up against Bembry. Even though his team earned the victory, Martelli wished that his friend and SJU alum Flint still had his star player in the fold.

“I’m really disappointed for Philadelphia this wasn’t Damion Lee versus DeAndre Bembry,” Martelli said. “But the kid made a decision, and everyone has got to move forward."

Welp. Lee was in Louisville on Friday night, scoring 14 points in his Cardinals debut for a Hall of Fame coach dealing with a lot of scrutiny. Even without Bembry’s counterpart, there were quite a few NBA teams that sent scouts to watch the Hawks’ 6-foot-6 (6’8” with the ‘fro) star. The Sixers, who went through the trouble of sending someone a whole five blocks from PCOM, were one of them.

So, how did he do? According to his coach, good but not great. That sounds about right. It’s a testament to Bembry’s talent that after watching him go for 23 points (6-12 FGs, 11-15 FTs,), 3 rebounds, 2 assists, 4 steals and one block, you can reasonably think, “He could probably could have played a little better.” One thing is for sure, though: Bembry made a killing at the free-throw line.

“They were pushing up on us, so it was [about] making an aggressive move,” Bembry said. “We had a lot of aggressive moves to the basket, and that’s why we got foul calls.”

2. High-scoring affair: This was our first look at the shot clock shortened to 30 seconds (good move, NCAA), but Martelli was still surprised by the game’s high-scoring nature. Who could blame him? Last year in this matchup, the score was 52-49.

“Going into this game thinking that 82 would be the total for the two teams, I thought we had decent flow [offensively],” Martelli said.

Whenever a foul wasn’t called, that is. But I would agree with Martelli that Saint Joe’s showed some promise offensively. The 4-18 shooting from deep has to improve and the four missed free throws in the final minute made the game seem closer than it was, but the Hawks shot 47 percent from the field.

Specifically, I like what we saw from the starting lineup of Bembry, point guard Shavar Newkirk, guard Aaron Brown, and forwards Pierfrancesco “Checco” Oliva/Isaiah Miles. The two big guys can shoot the three, which makes the spacing pretty decent. It wasn’t a mistake that Oliva and Brown, who combined for 27 points on 8-16 shooting, got the nod.

“The reason that these guys are starting is because they’re better for us offensively,” Martelli said. “The feel was good and the rhythm was going.”

3. Checco has arrived: After the game, Martelli talked about how Oliva walked in on him saying his pregame prayers. Before his first collegiate game, Oliva wasn’t nervous. He was mostly amused by his coach’s nerves.

“He had a laugh like, ‘Yeah we’re going to play and everything will be alright,’” Martelli said.

The confidence might help explain why, of the Hawks’ three freshman, Oliva was most impressive on opening night. Lamarr “Fresh” Kimble and Chris Clover, two fixtures in the Philadelphia Catholic League and promising newcomers in their own right, are players whose games I am pretty familiar with. This was my first look at Oliva, who comes to Saint Joe’s via Italy and North Jersey, and he was very impressive.

A stretch-4 type, Oliva reminds Martelli a little bit of Halil Kanacevic. Not only does he have Kanacevic’s perimeter skills, he also can get pretty emotional during games. Check out Checco’s reaction after hitting a dagger three-ball:

I was also impressed by his passing ability, which was on display a couple of times when Bembry sealed smaller Drexel defenders in the post. Here is one such pass:

“One time he missed me, and after I told him, ‘When you’re in the high post and the little guards are on me, hit me,’” Bembry said. “And after that, he hit me like three or four times. So he really understands basketball.”