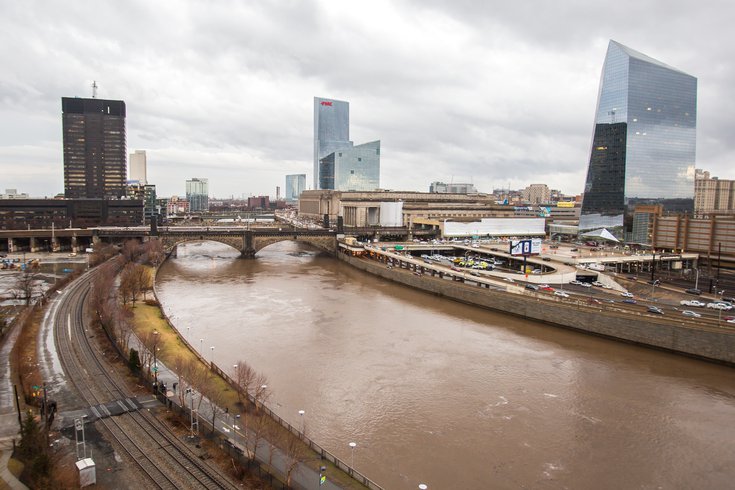 An unsecured barge is resting against the Vine Street Expressway Bridge, located just upstream from the rail bridge shown in the file photo above. SEPTA has suspended several Regional Rail lines out of an abundance of caution.

UPDATE (8/6/20): Eastbound Interstate 676 reopened this afternoon in Center City Philadelphia following the relocation of three barges that were lodged on the north side of the interstate bridge over the Schuylkill River, PennDOT officials said Thursday afternoon. Westbound lanes are expected to reopen later in the day.

The construction barge stuck beneath the Vine Street Expressway Bridge may remain there until Thursday, when the Schuylkill River is expected to recede, according to the Pennsylvania Department of Transportation.

As a result, I-676 is closed in both directions from I-76 to Broad Street until further notice. The highway likely will remain closed until the barge is removed from the area, PennDOT spokesperson Brad Rudolph said Wednesday.

The barge became dislodged from its mooring Tuesday afternoon after Tropical Storm Isaias pounded the Philadelphia region with heavy rains, causing the Schulykill River to rise significantly and, in some places, overflow its banks.

The Army Corp of Engineers was dredging near the Philadelphia Museum of Art when a crane barge and two connected hopper barges became loose and floated downstream, lodging itself under the bridge, Rudolph said.

#Chopper3 has live coverage of the unsecured construction barge stuck in the Schuylkill River at the Vine Street Expressway. The Vine remains closed EB & WB between Broad and I-76. Utilize the Schuylkill to South St or take I-95 to the Vine as alternates. @CBSPhilly pic.twitter.com/rT1YNvDeDu

In order to remove the barge, crews have to wait for the water to recede — which may not happen until Thursday, PennDOT said. It likely will be towed with a tugboat.

SEPTA suspended all Regional Rail lines late Tuesday night out of an abundance of caution. The barge is located upstream from a rail bridge near 30th Street Station.

Vine Expressway (676) is CLOSED both ways between 76 and Broad St. That's due to this loose barge on the Schuylkill River!#PhillyTraffic pic.twitter.com/7nNWgzhDM9

A command center was set up near the bridge with aid from several groups, including PennDOT, SEPTA, Philadelphia Police, Army Corps of Engineers, U.S. Coast Guard and Pennsylvania State Police.

Bridge inspectors are currently examining the structure of the bridge. It is not known if the bridge sustained any damage from the barge.

This is a developing story and will be updated when more information becomes available.