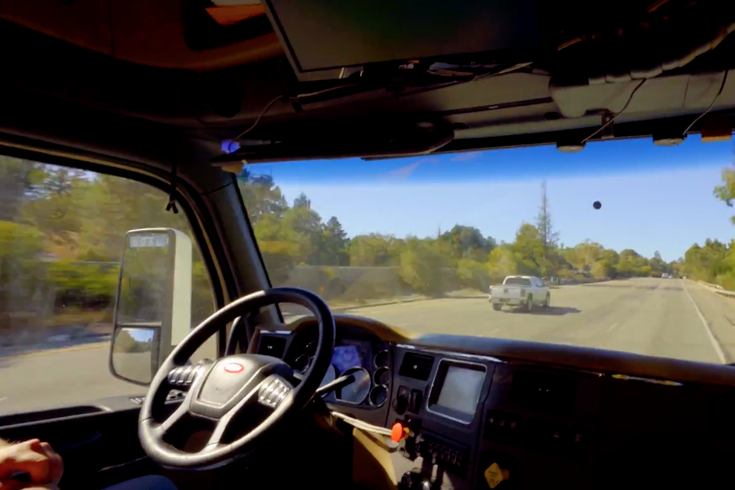 The first cross-country commercial freight trip completed by a self-driving semi truck finished its journey in Quakertown this week.

The first cross-country commercial freight trip completed by a self-driving semi truck finished its journey in Quakertown this week.

Silicon Valley-based startup Plus.ai announced the completion of its truck's three-day trip, which began in Tulare, California, and successfully delivered a truckload of Land O'Lakes butter to Bucks County (almost) entirely without driver interference, according to CNET.

The trip spanned 2,800 miles, according to a release from Plus.ai, and traveled primarily along Interstates 15 and 70.

Plus.ai said the only time the truck's autonomous mode was disengaged was for "federally mandated breaks and refueling," according to CNET. Otherwise, the safety driver and engineer never had to disengage the self-driving system because of a problem.

"This cross-country freight run with Land O’Lakes shows the safety, efficiency and maturity of our autonomous trucks, which are already delivering freight for other partners several days a week," Shawn Kerrigan, COO and co-founder of Plus.ai, said in a statement. "Continued advances in our autonomous trucks will make it possible for these quick cross-country runs to be the norm in the future."

Here's a look at a Plus.ai field test of its self-driving truck from 2018:

Plus.ai was founded in 2016, and specializes in self-driving technology.

PricewaterhouseCoopers, a multinational professional services network, released a report on automation in 2015 estimating that roughly 38% of U.S. jobs could be lost to automation by 2030.