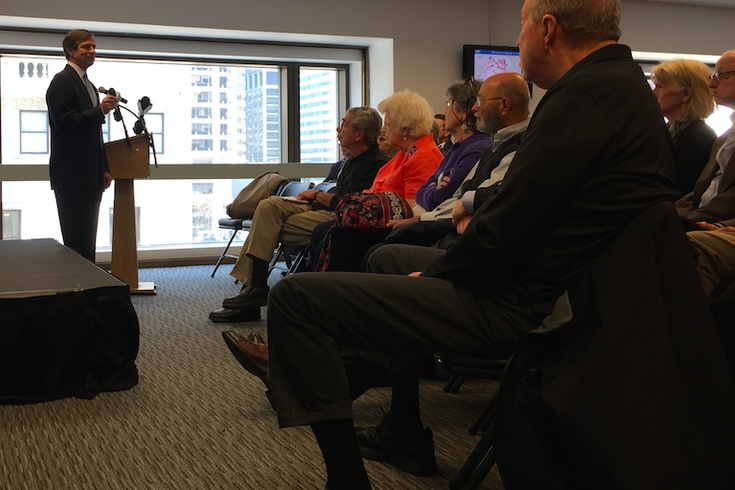 Joe Sestak – the former U.S. representative and U.S. Navy Admiral running in the Democratic Party primary for U.S. Senate – came to Philadelphia on Thursday to share his thoughts on military and diplomatic strategy related to ISIS.

As most current political discussions are wont to do, though, a question arose gauging his reaction to Donald Trump’s controversial quotes about barring Muslims from entering America. The question itself came from a ninth-grade student attending the event hosted by the World Affairs Council.

“I think what he says is shameful,” Sestak said during the packed hour-long session. “It’s the opposite of what we [Americans] stand for.”

Mercifully, however, the rest of the conversation – which featured a Q&A session with the dozens of attendees – didn’t center on the Republican Presidential candidate. Rather, Sestak laid out his issues with America’s current approach to ISIS.

Sestak also covered many of the issues broached on Thursday during an appearance on MSNBC before President Barack Obama’s address to the nation several days earlier.

He noted that America needs to stop looking at ISIS as if it’s “just an international terror organization.”

“It is a lot more,” he said. “It is a state that controls a population the size of Norway and a territory that is actually the size of Belgium, which went into lockdown weeks ago against the ISIS threat. … Unless you view your threat correctly, you will end up executing the wrong strategy.”

"The No. 1 Constitutional duty of our President and anyone in the U.S. Senate is the security of America. ... The Commander-in-Chief, I think, has to let the populace collectively know how we intend to deal with it in more specific terms." --Admiral Joe Sestak, U.S. Senate candidate

He remained critical of Obama’s approach, noting that it remains unclear to the American people what our country’s “endgame” is.

"My largest concern right now is how will it end," he said. "What is the endgame that the administration has actually determined we want to secure the peace?"

The guiding principles of Sestak’s philosophy, he said, are the U.S. leading a coalition of the willing, establishing an “endgame” for securing the peace, understanding that the military can stop – but not fix – problems and having an explicit goal for any military and diplomatic strategy.

From a military standpoint, that would be removing the “support ‘legs’ of the [ISIS] state” to move beyond disrupting terrorism; diplomatically speaking, Sestak urged attendees to recognize the fact that the coalition would “include often-adversarial countries” like Russia and Iran.

“Make sure you have a strategy, an absolute endgame goal for the day after with benchmarks by which you can adjudge whether that strategy is working or not,” he said. “How else can you decide if you want 50 special forces to go to Syria unless it’s park of the benchmark and strategy that we should have laid out in order to best address the national security concerns for America?

"Leadership is about galvanizing people behind a certain approach," he said. "We are at war. The Commander-in-Chief, I think, has to let the populace collectively know how we intend to deal with it in more specific terms."

Near the end of the session, one attendee asked Sestak a question similar to a press release put out by incumbent U.S. Sen. Pat Toomey (R) maintaining that the Democratic candidate reversed course after stating last year that ISIS was “out of gas.”

He shot down any intimation that he’s changed course, noting that the “run out of gas” quote focused on ISIS’ ability to “expand anymore” as it was stopped within 60 miles of Baghdad before sponsoring its caliphate.

"The No. 1 Constitutional duty of our President and anyone in the U.S. Senate is the security of America," he said. "The demise of ISIS must eventually, for a true endgame, be the demise of an idea."

As it pertains to the primary field, Sestak’s military history gives him a distinct background from which to draw that his foes Katie McGinty and John Fetterman lack.