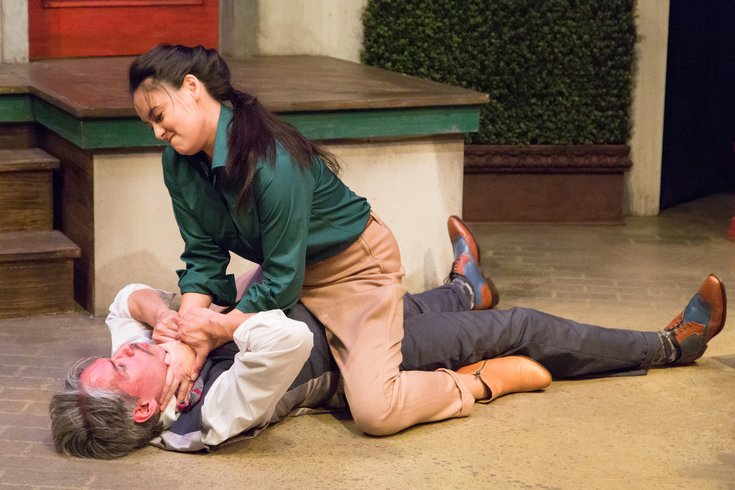 Joanna Liao as Katherine and J. Hernandez as Petruchio in "The Taming of the Shrew."

Read More
It seems like the Philadelphia theater scene is in a particularly Shakespearian mood this spring. Not only are there three upcoming productions of the Bard's plays in town with one already on stage, but there are concerts and events celebrating his works coming soon.
This Shakespeare spectacular comes just in time for Thursday, April 23, the day we celebrate the writer's birthday. Now that Fox's Shakespearean show "Empire" has finished its season (and thus, you probably have nothing else to do), you can catch up on its influences with shows and discussions.

The Taming of the Shrew

Due to this production's popularity, the Charles McMahon-directed play has been extended until early May. Mixing tango with this classic tale of sibling rivalry, Lantern Theater Company updates the story for this century.
Now through Sunday, May 3
Showtimes vary | $10-$39
Lantern Theater Company
923 Ludlow St.
(215) 829-0395

Follow four young lovers lost for one night in a magical forest while they get tangled up in love with this comedy about the trials and tribulations of romance. The Philadelphia Shakespeare Theatre’s artistic/executive director, Carmen Khan, directs the production.
Friday, April 3 through Sunday, May 17
Showtimes vary | $20-$35
The Philadelphia Shakespeare Theatre
2111 Sansom St.
(215) 496-8001

Scholars in Conversation: Desire, Dance, and Dynamic Women in The Taming of the Shrew

In conjunction with the Lantern production of "The Taming of the Shrew," they'll host panel discussions and Q&As with scholars, Lantern artists and audience members. The three-part series will touch on sexual attraction, how dance shapes culture and how Shakespeare characters can be updated for today.
Mondays, April 6, 13 & 20
7-8:30 p.m. | $10 each or $25 for all three
Lantern Theater Company
923 Ludlow St.
(215) 829-0395

Join the Philadelphia Orchestra as they perform excerpts from Prokofiev's "Romeo and Juliet," as well as excerpts from John Williams' "Close Encounters of the Third Kind" and Lindberg's "Graffiti." Stéphane Denève will conduct, and the Philadelphia Singers Chorale will perform.
Thursday, April 23 through Saturday, April 25
Showtimes vary | $35-$165
Kimmel Center
300 S. Broad St.
(215) 893-1999

Perform your favorite monologue or scene from Shakespeare in this wacky open mic night. Both fans and actors will be performing at this first-time event.
Sunday, April 26
6 p.m. | $10, or $5 if you perform
The Philadelphia Shakespeare Theatre
2111 Sansom St.
(215) 496-8001