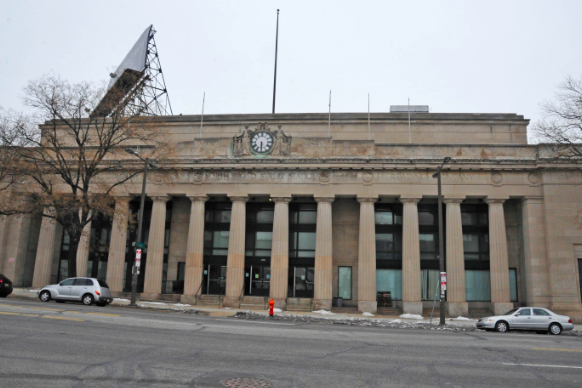 Gunfire broke out at a North Philadelphia homeless shelter Sunday morning, leaving one person dead and another injured.

Authorities said a man who had been evicted from the shelter for being intoxicated fatally shot one employee and wounded another after returning for his belongings Sunday morning. The shooting occurred around 6 a.m. at the Station House, which is located at 2601 N. Broad Street, according to CBSPhilly.

Police said one employee, a man in his forties, was killed and another, a 26-year-old man, was taken to Temple University Hospital with a gunshot wound to the hip.

Residents at the shelter told NBC 10 the that they saw one of the victims lying in a pool of blood while a man ran from the shelter.

The 32-year-old gunman — wearing a green hoodie, a black skull cap and jeans — was last seen fleeing behind railroad tracks in the rear of the building. Investigators said the shooter had been identified by the surviving employee.

Former mayor W. Wilson Goode, whose SELF, Inc. organization runs The Station House as an emergency housing location for single men, praised the two employees of the shelter, who were not identified.

This morning a man who had dedicated his career to helping our City’s most vulnerable lost his life, and one of his co-workers was badly injured. It’s a heartbreaking tragedy.

I’ve spoken with Mayor Goode and assured him that the shelter, its staff, the victims and their families have the full support of the City behind them. The PPD is working diligently to apprehend the shooter, and anyone with tips regarding the shooter are asked to call 215-686-TIPS (8477). The City will also assist the shelter with a review of its security procedures as part of our continuing efforts to make all of our shelter safe spaces for their residents.

I implore Philadelphians in need of shelter services to continue to utilize them as we enter a Code Blue this evening. The City is squarely focused on your safety. If you know of a homeless person in need of shelter please call our 24-hour hotline at 215-232-1984.”

Marie Nahikian, director of the city Office of Supportive Housing, told WPVI-TV that assisting people who are on the street is very difficult and "very complicated" work.

"We're very, very, very concerned; this is not something that happens in the city of Philadelphia's shelters for people experiencing homelessness. It's a very unusual situation," Nahikian said. "When you have to run a facility that has rules and you're still loved by the residents here, it makes you a very special person."