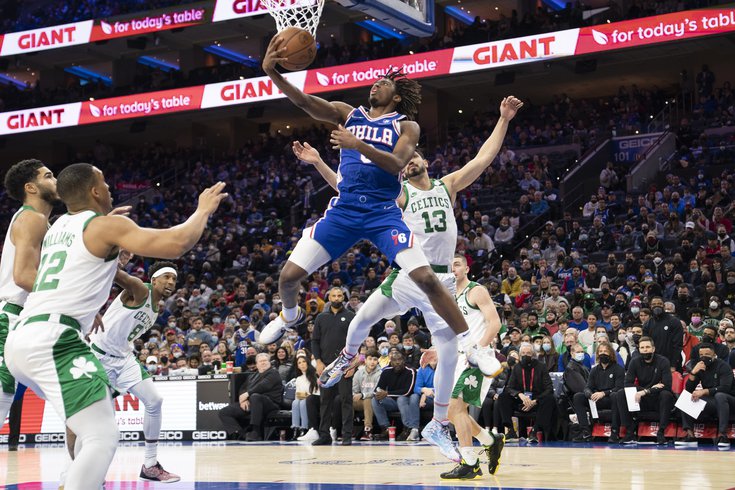 Philadelphia 76ers point guard Tyrese Maxey shoots a reverse layup during the second quarter of their win over the Celtics.

The Sixers dominated the Celtics in the first quarter and never looked back, playing frontrunner for most of the evening in a 111-99 ass-whooping of their hated rivals that wasn't as close as the final score suggests.

• The Sixers have not exactly been an offensive juggernaut since starting the season absolutely on fire there, but some of those issues are due to a lack of decisiveness, rather than a complete failure of system and personnel. Open shots are being created a lot of the time, and the Sixers are wasting those chances.

One of the most refreshing things in Friday night's win was their willingness to simply get clean looks up. It's an area where Tobias Harris actually deserves credit recently, his overall struggles aside — he has been pulling open threes on a much more regular basis and living with the results, something they need him to do to have a productive offense around Joel Embiid. When Harris is stepping into those shots instead of grinding the offense to a complete stop, they tend to look better even when he misses, and the same goes for Tyrese Maxey, who had his fair share of catch-and-shoot opportunities against Boston.

Both Maxey and Harris were rewarded for their version of taking it to the Celtics. Boston was forced to cycle through some unorthodox lineups as a result of how out of hand this game was early, and Harris had the good fortune to get matched up with smaller Celtics on the block, using the size advantage to score some quick ones around the basket. For Maxey, his speed was as important as his touch from the corner, with Philly's young gun getting to the basket for some beautiful finishes around the rim, including an up-and-under move that put the capper on Philadelphia's dominant first quarter.

For a brief moment to open the fourth quarter, it looked like the Celtics were going to undo all of that great early work and force all the starters back into the game, with Jaylen Brown and Jayson Tatum scoring against Philadelphia's reserves to inch closer to the frontrunners. It was up to Maxey to ensure the Sixers would stay out in front with a relatively comfortable lead, and Maxey did a great job to keep Philly afloat all by himself. Maxey canned a pull-up three out of a pick-and-roll before knocking down a catch-and-shoot look shortly afterward, pushing himself to a 20+ point evening.

If the late-game defense had been a bit better, perhaps Embiid could have stayed parked on the bench, but alas.

• I am not sure there has been an individual defensive quarter played this season that is better than the 12 minutes we saw from Matisse Thybulle to open this game. He was absolutely unbelievable to open this game up, moving back and forth in assignments between Brown and Tatum, credibly guarding both players and disrupting the Celtics when he was asked to step in off-ball, too.

When Thybulle's able to block a jump shooter in a normal game, it's basically always impressive, but that goes double when he's able to pull it off against someone like Brown, who keeps defenders uneasy with his combination of pace and skill, leaving you guessing whether he's going to blow past you or hit a jumper while you're backpedaling to stop the drive. But Thybulle was able to keep him down anyway, and he swatted a three-point attempt from Brown that earned a rousing ovation from the fans.

It was that kind of quarter for Thybulle, who made life miserable for the star Boston wings. The Celtics could not stop turning the ball over early in this one, and Thybulle was either directly involved or part of the committee that helped make that happen, keeping the Celtics disjointed at almost all times. There were even a few possessions where Thybulle basically just had to wait for the Celtics to screw up, standing in ideal off-ball position and striking as soon as Boston threw a bogus pass.

A big reason why he could do that? The man in the middle. Joel Embiid was nearly as good and important as Thybulle, covering for the perimeter defender each and every time he was beaten. Critically, Embiid never flashed far enough to leave him out of position to recover. It kept the Celtics from scoring at the rim while also covering up opportunities for Boston to score on pull-up jumpers, leaving them without a prayer to score for most of the first quarter. Embiid did an excellent job against Boston's premier wings when he had to defend them in isolation, too, using his size to push drivers toward the baseline and into no-win situations.

It was a reminder of how good they might be on defense with reinforcements. They have two high-level defenders in prominent roles, and with some more lineup balancing, they might inch closer toward the elite level they played at last season, even if they can't bring back a guy like Ben Simmons.

• If you were hoping Joel Embiid would break the franchise record for consecutive 30-point games and stand alone atop the leaderboard, you went home disappointed on Friday night. But the style of performance he had was a lot more important than an individual milestone, proof of his growth against these Celtics.

It used to be that the Celtics could sell out to stop Embiid and feel pretty good about their ability to isolate him from his teammates, turning him over and ensuring their shooters could not get going around the big guy. Those days are not necessarily gone — he had one clunker against them in Boston this year — but it's a lot harder to completely disrupt his game this season. Embiid is seeing the floor better from the post, getting passes out quicker when he must, and trusting that his teammates will reward his unselfishness.

As Celtics head coach (and former Sixers assistant) Ime Udoka noted before the game, Embiid is also a different player in transition this season, a guy who can get them out on the break and create for himself and others, allowing the Sixers to get some easy points instead of relying on him playing superhero in the post for 48 minutes.

(Frankly, they probably could have gotten him the ball more against Boston's zone, rather than just making a few swing passes around the perimeter every time, but that's a different story.)

Between the defensive work and the little things on offense — and of course, the usual diet of fouls drawn and made jumpers — Embiid did more than his fair share in this one. With this guy able to do so much on both sides of the ball, the Sixers don't necessarily need standout performances from anybody else. If the rest of the group sticks to their roles and settles in around him, they're in great shape.

• The deeper we get into this season, the more confident you can feel that Maxey has simply turned the corner as a shooter, and that's a development that would be a huge boost for this group, making them more dangerous whether he's on or off-ball. While I think he needs to spend much less time sitting in the corner and more energy playing initiator, Maxey's increased success as a catch-and-shoot guy is a big deal. He looks like a natural corner shooter these days, which is something that didn't seem like a short-term possibility as recently as a year ago.

• Stop me if you've heard this before, but the Sixers offense slowed down quite a bit when the Celtics decided to go to a 2-3 zone, something that is rarely on the menu for Boston. Given how the first half went, you can't really blame the Celtics for taking that path, but it sure made this game a slog, and it highlighted a continued weakness the Sixers need to clean up.

This honestly felt a bit like a college game at times, with the Celtics emptying the bench, full-court trapping, and looking for any possible way to slow down Philly. They were able to do so, but since the Sixers remained dialed in on defense, it didn't ultimately matter too much.

• We don't need to get into big coaching-related complaints in a comfortable win, but Tyrese Maxey needs to play a more central role in Philadelphia's offense. There are stretches where he gets stuck in the corner and doesn't add much for reasons that aren't his fault or choice, and that shouldn't happen with their most dynamic ballhandler. I think you continue to see signs of progress with him reading and feeling the game, with Maxey doing a better job of preserving his dribble so that he doesn't get stuck in no man's land. It would be nice to see him continue to build on those reps and become the "point guard" that does the playmaking and setup work they need on top of the scoring. In due time, I suppose.

• I don't think I have ever seen Matisse Thybulle actually show anger before, so Josh Richardson's flagrant foul in the first quarter was noteworthy for that reason alone. Thybulle is a cool customer, and he wasn't too pleased to get pulled up high while going up to score in transition.

But things got worse for Thybulle in the opponent fouling department in the second half. After coming up with another steal, Thybulle was on his way up to dunk the ball in transition when Dennis Schroder grazed him from behind on his way up, with Thybulle swinging off the rim and landing hard on his back in the process. In real-time, it didn't look like anything other than an unfortunate fall, but the crowd took exception after seeing Schroder put a hand on him, and the flagrant one he earned was well-deserved in the mind of this writer.

It was good to see Thybulle shake it off and eventually can a corner three on the next possession, but we'll see if this is a fall he ends up feeling later. Thybulle was ruled out for the rest of the game with what the team called "right shoulder soreness" in the fourth quarter, so stay tuned. Imagine he will at least get the night off in Miami on Saturday.

• I still can't believe the guy goes by Enes Freedom now. What a country.