Six months removed from the low point of his career, could the Sixers guard wind up with the team that helped unravel him? 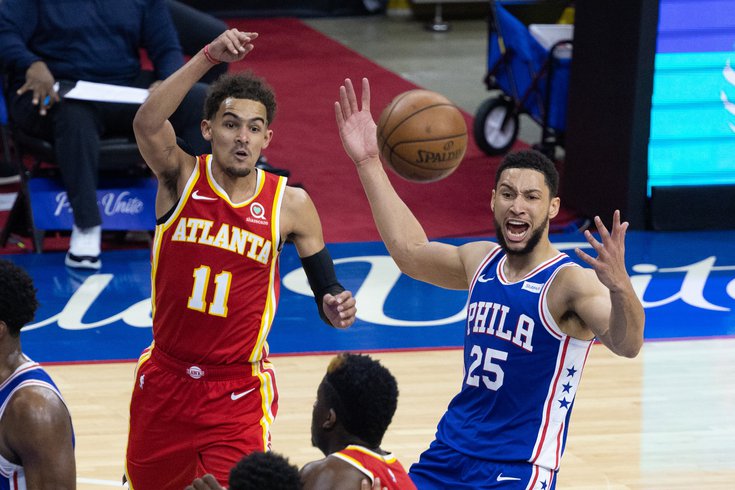 It's not often that you see a player suffer their lowest career moment against a team and then end up in trade rumors involving that team half a year later. But that's the situation we appear to find ourselves in with Ben Simmons and the Atlanta Hawks, barely removed from June's meltdown in round two against them.

The Hawks have been named as a potential Simmons suitor in recent days, first by Substack's Marc Stein last Friday and most recently by Shams Charania at The Athletic, with Charania connecting some dots regarding Hawks forward John Collins:

The Hawks are an emerging potential landing spot for Simmons, whose Defensive Player of the Year-caliber play would surely elevate one of the league’s bottom five defenses. In scanning the Hawks’ roster, it’s obvious John Collins — who signed a five-year, $125 million deal in restricted free agency last offseason — and Cam Reddish are among the players who could acquiesce a package for Simmons. It’s unclear whether the Hawks are ready to put such a proposal on the table after making a run to the Eastern Conference finals a season ago.

Collins, however, has grown increasingly frustrated over his role in Atlanta, multiple sources have told The Athletic. His shot attempts per game and usage rate have decreased in each of the past three seasons — even as the athletic, energetic Collins has improved his offensive repertoire. The 6-foot-9 big man has challenged the Hawks locker room on multiple occasions to play team basketball and commit to one another this season. Oftentimes, Collins has felt his voice go unheard.

“I’ve banged my head on the wall a couple of times trying to figure it out myself, there’s really no excuse,” Collins said Friday night after the Hawks’ 134-118 loss to the Lakers in Los Angeles. “All I can say is it’s unacceptable and we have to dig down and do the things necessary to win or this is going to be the result every night.” [The Athletic]

Whether Collins is included in a potential Simmons deal or not, the trade fit here seems pretty shaky on both ends of the deal. For one, the Hawks are a clunkier landing spot for Simmons than a lot of people seem to realize by simply focusing on the combination with Trae Young (which is admittedly very good on paper). Center Clint Capela can't be moved until the offseason, and Capela is an exclusive around-the-rim player on offense, which could complicate Atlanta's offensive picture in a big way with Simmons in the mix, potentially undermining any gains they might make on defense. You could understand why they'd try to buy low on Simmons if they think they can leverage that Young/Simmons combo over the long-term, though given that they spent a playoff series unraveling Simmons mentally, they're one of the more surprising entrants in the sweepstakes.

Looking at things from a Philadelphia perspective, the difficult part is finding the one guy who is worth constructing a trade around to bolster their current group. The Hawks' biggest advantage relative to the rest of the market is the depth they can offer, but Daryl Morey has shown no interest to this point in making a deal for improved depth. The Sixers want an All-Star or All-Star caliber player back for Simmons, and there's no obvious candidate at that level coming from Atlanta.

Squint hard enough and maybe you can convince yourself that's Collins, an insane athlete in the frontcourt who is a very dangerous offensive player at his best. Leave him alone on the perimeter, and Collins has proven he can knock down open threes, shooting around 40 percent from deep each of the last three seasons (39.9 percent last year is his lowest mark out of those three years). His ascent to real-deal starter after a decent rookie season coincided with Trae Young's arrival in Atlanta, with Collins serving as an excellent, high-flying partner in the pick-and-roll, not to mention a dangerous putback artist on offensive rebounds. Collins predominantly functions as an off-ball player and finisher, though he has a little bit of wiggle off the bounce, at least the ability to beat closeouts and finish around the rim from time to time if necessary.

Defensively, a power forward like Collins makes some sense next to Embiid, giving the Sixers a level of weakside rim protection behind the big guy without sacrificing shooting in the process. At least some of the merit behind acquiring Collins would rest on using him to play some small-ball five, with Collins offering the Sixers a level of lineup versatility they don't have right now. Tyrese Maxey, who should be anchoring a lot of backup units when Embiid hits the bench, would have the best combination roll/pop target he could ask for.

That's sort of where the case ends, though. The immediate question is what would become of Tobias Harris if you make a move for Collins, with Harris much better suited as a four than at the three. If you're of the belief the Sixers need to move Harris regardless, fair enough, but if the Sixers were to make a move for Collins without simultaneously shipping out Harris, they'd find themselves with even less leverage than they have at the moment, with Harris' contract at front of mind for a lot of teams around the league.

The Sixers have insisted every time Harris' name has popped up in trade rumors that they like Harris and consider him an important piece of their program. There's a definite lip service element to those claims, but thinking about what they'd lose swapping him out for Collins is important. Harris' self-creation has gone poorly this season, but he is almost certainly better on that front than Collins, who has never been asked or expected to create much for himself and others. Collins is streets ahead as a finisher, no doubt, but if we were to assume that a Harris deal would bring back a marginal return, the Sixers could find themselves in a spot where perimeter creation issues are more dire than ever. It would put even more strain on Maxey, a second-year handler, and a cast of guards who are almost all scorers masquerading as combo guards.

(And something to keep in mind that we have discussed all year — Collins is not exactly a high-volume gunner from outside, averaging just three triples attempted per game this year, a number lower than the infamously-reluctant Harris on the year. That's while playing with an elite creator like Young, who can find opportunities most guards can't. Reason to be dubious he would work well on offense for Philly.)

With Philadelphia's offense becoming even more Embiid-centric this season, perhaps that would not matter, with Collins' ability to find and exploit pockets of space off-ball playing well in their setup. And to be fair, Atlanta has some interesting depth pieces to offer up in rounding out a package for Simmons, where you could pick and choose from the group depending on what you prioritize building around Embiid.

Third-year wing Cam Reddish is a local product, born in Norristown before starring at Westtown School and being named Pennsylvania's Mr. Basketball in 2018. With the Hawks depleted due to injuries and COVID this year, Reddish has taken a step forward, knocking down a career-high 37.9 percent of his threes while owning a larger share of the offense. He's a big, athletic wing who can create his own shot and defend several positions, the sort of player coveted by every NBA team and an archetype the Sixers have almost never had on the roster. But there's a reason a 22-year-old with his physical traits and flashes of promise is said to be available over a year away from restricted free agency, with Reddish's tunnel vision and questionable decision-making undermining his effectiveness. Those bad tendencies could be even more pronounced on a team without a true perimeter alpha, which would make him a risky bet for Philly and especially in this specific scenario.

Go down the list and there's a similar give and take with a handful of Atlanta players, from Bogdan Bogdanovic to Danilo Gallinari to De'Andre Hunter (another Philly-area kid!), none of them serving as a standout, slam-dunk return for Simmons. A trade with the Hawks would rest on the premise that Embiid simply needs more good players around him, rather than one more elite guy to help him shoulder the load, and maybe his improvements this year could convince you that's the style of deal they need. With Embiid stepping forward as a passer, fast-break leader, and overall player, better depth could be the difference between an early exit and a deep playoff run.

But the Sixers have given no inclination that's how they're looking at the Simmons trade market. Morey covets impact players, the sort of guys who can take over games and paper over concerns you might have elsewhere on the roster. The Hawks are an interesting trade partner, and a team who could certainly present a "good" package if they ponied up for Simmons, it just feels like they're missing that extra oomph the Sixers are looking for in return for No. 25.