It appears Sacramento's De'Aaron Fox and Tyrese Haliburton are no longer untouchable in trades. Here's what that means for the Sixers... 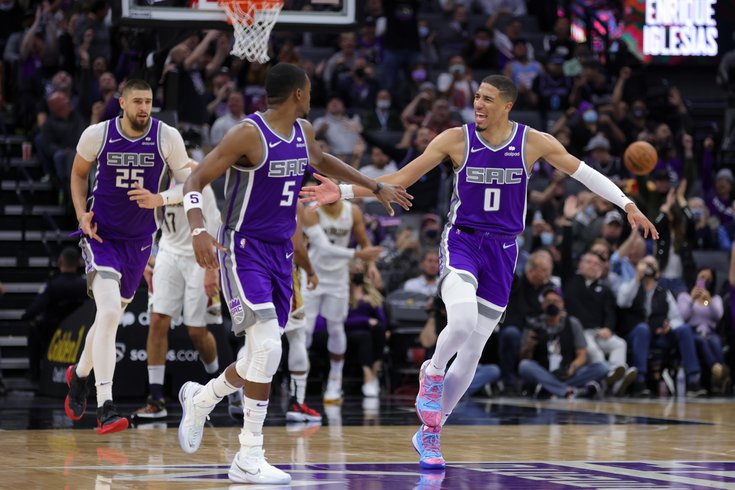 The Sixers' Ben Simmons standoff has lasted into January 2022 for a number of reasons, but at the top of the list was a belief from the front office that more opportunities would become available over time. That belief appears to have paid off in at least one situation, with the Sacramento Kings reportedly reconsidering their untouchables in the midst of another losing season.

Last we discussed the Kings, the word on the street was that guards De'Aaron Fox and Tyrese Haliburton were untouchable, building blocks the organization hoped to build around over the long term. According to Sam Amick of The Athletic, who has a good sense of all things Kings, that has changed following a 16-23 start to the year for Sacramento:

Five months later, with the Kings (16-23) barely hanging onto the 10th spot in this watered-down West, they’re still highly motivated to make the kind of significant move(s) that would both bolster their postseason chances in the present while giving them a runway for sustained success in the future. More specifically, sources say Kings owner Vivek Ranadive has continued to make it clear to McNair that he has the green light to do whatever is necessary to meet those goals. And while the Kings would prefer to keep building around De’Aaron Fox and Tyrese Haliburton, their strong appetite to improve means that no player is off the table in terms of potential talks.

Wherever there’s an impact player who can be had, in other words, they’ll be exploring the possibilities. And yes, as you likely wondered, that includes Philadelphia’s Ben Simmons.

While I reported in early September that a Kings-Simmons deal was looking very unlikely, that was long before team officials had a chance to see nearly half a season’s worth of (mostly subpar) play. Sacramento’s interest is definitely there.  [The Athletic]

While Fox and Haliburton are not the only two guys on the roster worth looking at, they are the two most obvious centerpieces in a major deal if the Kings decide to shake things up. And Fox and Haliburton represent very different opportunities for Philadelphia, one of which I believe they'd prefer if they were to go down this road.

You probably know Fox a bit better, thanks to his high-profile year at Kentucky (where he dismantled Lonzo Ball in the NCAA Tournament) and his longer pro resume. Fox's brand is pretty simple — speed kills. His end-to-end speed is among the best in the league, if not right at the top alongside guys like the aforementioned Simmons. Fox remains one of the highest-volume transition players in the league, frequently getting to the basket and/or drawing fouls while pushing the pace off of a stop.

In both volume and effectiveness, though, Fox has fallen off in transition some this year, coinciding with an almost universal drop in his numbers across the board. And after a 2020-21 season that looked to be the latest step toward a potential star leap, Fox has regressed in almost every possible way this season. His shooting numbers (save for his free-throw percentage) are all down, he's getting to the line less, and his warts are becoming a little less easy to excuse the longer his resume gets at the professional level.

The question with Fox has always been whether his ability to weaponize his speed is enough to get away with some of the holes in his game. At his best, the pressure Fox puts on the rim allows him to be an effective scorer and playmaker, collapsing a defense only to spray the ball out to an open shooter like Buddy Hield or Harrison Barnes. Fox is a more natural table-setter than current Sixers point guard Tyrese Maxey, and the Sixers have definitely missed having a true table-setter in the backcourt at times this season.

That said, Fox is often a trainwreck on defense, apathetic at his worst despite having the tools to be at least a helpful defender in the backcourt. If you're envisioning a fit next to Joel Embiid, there's a lot that could go wrong, especially when you consider his shot profile this season. He is relying on mid-range shots more than ever this season, and though he's probably a better shooter than his 25.2 percent mark from deep shows this year, the Sixers have enough problems with iffy and/or hesitant shooters without inviting Fox into their backcourt.

That brings us Haliburton, who made a lot of noise as a rookie when Sacramento stole him late in the 2021 Draft lottery. Unorthodox shooting mechanics caused some hesitation before he entered the league, but Haliburton has proven to be a reliable and deadly marksman from outside, shooting 42.4 percent from three this year after shooting a hair under 41 percent during his rookie season.

Dating back to his time at Iowa State, Haliburton has proven to be a willing and capable playmaker as well, keeping his turnovers to a minimum while consistently using his length and intelligence to find passing windows on the move. Sometimes, that playmaker's touch can be a bit problematic, as Haliburton can be reluctant to pursue his own opportunities in favor of setting teammates up. That said, you can see the outline of what Haliburton's life might look like in a Fox-less future — with Fox out for four games in mid-December, Haliburton registered four consecutive 20-point, 10-assist games leading the way for Sacramento, the first player to do so since 1982, an impressive feat even if the history of guard play there is not exactly elite. There are passes Haliburton drops off to bigs for easy buckets that come naturally to him in stark contrast to Philly's Maxey, who is still finding himself as a lead playmaker.

Though Haliburton has not helped shore up the defense in Sacramento, with the Kings still ranking in the bottom five league-wide, he has fewer red flags on that end of the floor than Fox. He's bigger, longer, and has better off-ball habits than Fox, which was a big reason he was a steal machine at the college level. As he fills his frame out more, Haliburton should be a relatively versatile backcourt defender with time, and he's intelligent enough to project him as a solid, if not outright good team defender over the long term.

Dating back to the preseason, my understanding has been that if the Sixers were to make a deal with the Kings, Haliburton would be the guy they'd covet over Fox for a number of reasons. He lags behind in the counting stats department, but his fit is significantly cleaner than Fox's would be, and the Sixers don't want to trade Simmons for another player who might be a clunky pairing with Embiid. Haliburton's contract also provides them with significant flexibility depending on the shape of the deal they'd make. Haliburton makes less than $6 million a year through 2023-24 (assuming his fourth-year option is picked up), which would mean the Kings need to attach at least one more hefty contract in order to make a Simmons deal viable, a win on two fronts for Philly — they could potentially get multiple readymade contributors back and open up some nearer-term cap space to work with.

Whether this is the sort of deal the Sixers end up pursuing and making, on the other hand, is a different story. Daryl Morey has made no secret that they'd prefer to get a readymade All-Star back from Simmons, and neither Haliburton or Fox is that right now. There are questions Philadelphia would have to answer about the state of the team if they acquired one of these guys, mainly what it would mean for Maxey, Seth Curry, and the other pieces that currently make up the backcourt. Both Fox and Haliburton seem like they'd benefit from a better-fitting partner alongside them, and they wouldn't necessarily be getting that in the Sixers' backcourt, even if a partnership with Joel Embiid would be fruitful.

In any case, the Kings being willing to entertain Fox and Haliburton deals is significant for the Sixers, even if it simply opens a path to bigger multi-team trades. There's a scenario here where everybody can win — a team with a disgruntled star gets young players and picks, the Kings get Simmons to raise their franchise's floor, and the Sixers get a high-level player who can help Embiid compete right now. And Morey's working relationship with Kings exec and former Rockets teammate Monte McNair makes it easier to work on deals of that nature.

This won't be the first or last time you hear this, but keep your eye on Sacramento. You never know what they might do.