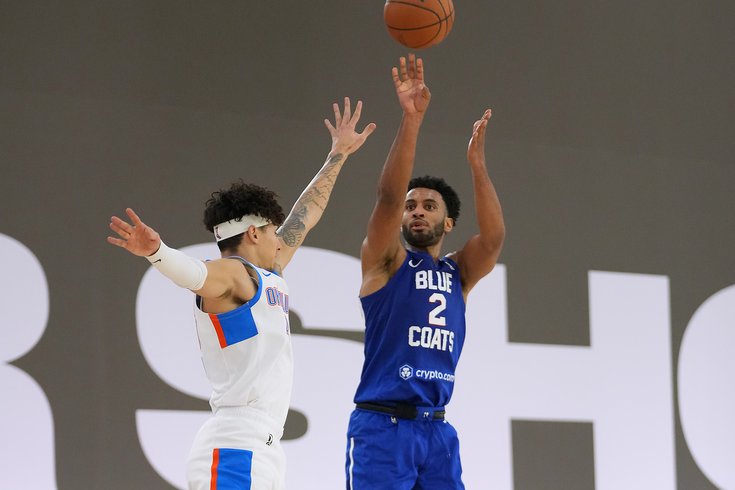 The Sixers signed Braxton Key to a 10-day hardship deal.

The Sixers are signing Braxton Key to a 10-day hardship exception deal, a team source told PhillyVoice on Tuesday night, giving the Sixers another reinforcement from the Delaware Blue Coats as they continue to deal with COVID complications with their roster.

Shortly before Monday's win over the Houston Rockets, the Sixers notified reporters that two more players, Tyrese Maxey and Matisse Thybulle, were headed into the health and safety protocols. Maxey had a bout with COVID before the start of the 2020-21 season and until Monday had avoided getting knocked out of the lineup due to the virus this year. And after appearing in Monday's game, backup big Paul Reed was added to the health and safety protocols on Tuesday, ruled out for the game in Orlando along with Maxey, Thybulle, Jaden Springer, Ben Simmons, and Shake Milton, the last of whom will miss the game due to a back contusion suffered against Houston.

That leaves the Sixers short on players yet again, so in steps Key, who joined Philadelphia's G-League program last January after going undrafted following four years split between Alabama and Virginia. Rather than look outside of their program for an extra guy on short notice, the Sixers are mining the Blue Coats yet again, hoping Key can replicate some of the success he has had for Delaware in spot minutes for the big club.

Key left a strong impression on his parent club during a stint in Las Vegas at the G-League showcase, garnering some consideration for a 10-day deal even prior to more guys going into the health and safety protocols. It seems Reed's entry into the protocol accelerated a decision there. With averages of 13.1 points, 7.3 rebounds, and 3.0 assists per game across 26 minutes a night, Key's role for the Blue Coats has expanded this season, with the 6'8" Key playing small-ball big minutes for Delaware, making him at least a semi-plausible fill in for Reed.

Should everything break right for Philadelphia between now and Wednesday night's game, there's a chance Key won't be needed in Orlando. Seton Hall guard Myles Powell, who the Sixers signed to a two-way contract in mid-December, is listed as questionable for Wednesday's game and could get out of the health and safety protocols in time for the game. The team is still waiting on clarity with regards to Thybulle as well — the early indication is that he was sent into the protocol Monday due to an inconclusive test, leaving the door open for him to return to the floor sooner rather than later if he could produce negative test results 24 hours apart. But he remains in the protocol as of this writing, and it's unclear how quickly that situation can and will be resolved.

The Sixers' G-League program has done a good job bringing guys along over the last few years, with Paul Reed's more mature, role-conscious approach to the game this season reflecting well on the work he has done with the Blue Coats. This year more than ever, a strong pipeline from the minor league affiliate to the NBA club can pay dividends.

If nothing else, it's a good opportunity for Key to mix it up with the big boys and show what he's got.