The second-year guard has been thriving with Ben Simmons out. How good can he be? And is Daryl Morey still unwilling to trade him? 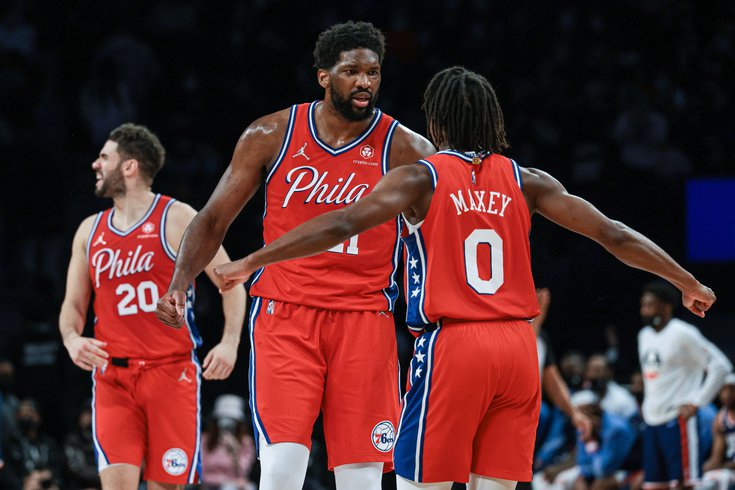 Up one with around three minutes to play in Brooklyn, the Sixers were looking for a way to close out one of their best wins of the season. To no one's surprise, their first instinct was to put Joel Embiid and Seth Curry in an action together, trusting a combination that has produced for them time and time again this season.

But when Brooklyn misfired on their switches and left the hot hand of the second half open, it was second-year guard Tyrese Maxey who had the best look of anyone on the floor. And in that critical moment, Embiid did something he hasn't always proven willing to do in big moments — he trusted one of his teammates to get the job done, hitting Maxey with a rapid-fire pass on the short roll for an open corner three. When assistant coach Dan Burke spoke to reporters after the game, it was one of the moments he seemed to have in mind while praising Embiid's approach to crunch time.

"He started trusting his teammates more. He wanted to win this, and sometimes when you want to win it so badly, you kind of do it by yourself. I thought he had a good mix, especially in the second half," Burke said. "We know we have to play through him, and I told him that after the game. We're okay with him calling the plays, they don't always have to be for him, but we know we have to play through him. Just keep building the trust with your teammates out there, I thought when we started making extra passes, we were just much better."

Through Philadelphia's first 35 games, it has become clear that their most reasonable path to improvement — until and unless they make a Ben Simmons trade — is trying their best to facilitate Maxey's development. Maxey possesses a combination of internal drive, speed, and fearlessness that makes you believe bigger things are on the horizon for him. But it has been a struggle at times to get him rolling at the same time as Embiid, their styles and skillsets not always meshing.

In bits and pieces over the last week, that has started to change.The work starts with both players accepting what they must do in order to help the other guy out, embracing the parts of the game that they either don't enjoy or don't come naturally to them.

For Embiid, it means embracing being a screener and coming out to free Maxey up, repaying him for the barrage of entry passes the big guy gets on a given night. And as Embiid was quick to remind after Thursday's win over the Nets, Maxey's end of the bargain is as simple as taking and making more threes, his teammates reminding him that he has to trust the work he puts in there when opportunities come during the game.

"See what happens when you freaking shoot threes? Come on man, shoot the three," Embiid said with a smile at their postgame presser. "You were great, that's how you respond to criticism."

The criticism, for anyone who missed it, was another round of ribbing from Embiid two nights prior, the franchise player mocking Maxey for a poor night shooting the basketball in Toronto. And though it's obviously much easier to be chummy and poke fun at bad games after wins, it shows a level of comfort between the two players that has shown up on the floor.

Maxey may be a scorer in a point guard's body, but there have been momentary flashes of his progress reading the floor and thinking like a playmaker. During that terrible game against the Raptors on Tuesday, Maxey would come up with just one assist, this drop-off pass for Embiid at the rim where the big guy had to do almost zero work to score two points:

Plays like these have been far too infrequent over the course of Embiid's career, and that has only been amplified this season with a $30 million playmaking hole in the lineup. It has been hard to blame Maxey when he has missed reads like this while barreling toward the rim, and you can't blame a kid with his pace for thinking they can always get to the hoop and score once he turns the corner. But Maxey's climb to the next level as a player will hinge on him keeping defenses unsure of his next move, and as the game continues to slow down for him with more experience, reads as simple as this one will help him use his scoring juice to make life easier for Embiid.

Back when T.J. McConnell was one of the guards running this team, Sixers fans became familiar with Nash-ing, when a player keeps their dribble alive and circles back after a drive to the basket, named after Steve Nash built a career out of constantly probing for a better look. In Sunday's win over Washington, Maxey paid homage to the former Suns MVP with a hesitation move that warranted a little more patience from the Kentucky product:

Though there's a limit to how excited you can get about relatively normal point guard play, these are reads and tendencies Maxey simply did not show (or have a chance to show) early in his Sixers tenure. Maxey has always made sure Embiid gets his touches, sometimes to a fault, but their gains of late have shown something important to the big man. There is increasing evidence that plays run for and through Maxey will lead to easier looks for the big guy, and more incentive for him to stay dialed in and connected to Maxey when the gameflow tilts toward his younger running mate.

Trust has not always been an easy thing for Embiid to hand out in Philadelphia. The GM who drafted him was replaced by a man who left the franchise in disgrace after it was revealed that (among other things) burner accounts disparaged Embiid in favor of lifting up Ben Simmons, who was drafted by that disgraced executive. The roster has shifted around him constantly, and the player he built the most impactful two-man chemistry with, Jimmy Butler, departed in free agency and was effectively replaced by another center who did not aid Embiid one bit.

Knowing how Daryl Morey operates, it's impossible to know how long Maxey's Sixers tenure will last from where we sit today. When in trade talks for high-caliber players over the last year or so, they have frequently beaten back teams from trying to steal Maxey from them, assuring them that they love what they've seen and hope he remains in Philly for a long, long time. But if the difference between getting a readymade All-NBA player is including Maxey or not, you do wonder if the Sixers will eventually soften on their Maxey stance, trading future upside for certainty in production during Embiid's prime.

If they allow this partnership to develop, though, it seems the seeds for a productive relationship have not only been planted but started to show growth above the surface. Maxey is stepping forward, and the franchise player is taking notice, doing what he can to help him become the best version of himself. And in a Sixers season that has trended toward gloom for most of the year, it offers something powerful to the Sixers and their fans — hope.