In the early 1980's, the team asked a Philly ad agency to come up with a new look. They didn't end up using it. 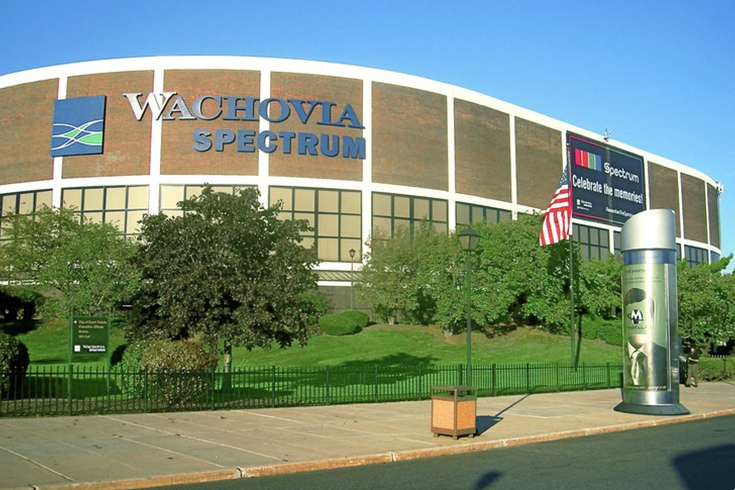 When the Sixers still played at the Spectrum in the early 1980's, the team briefly explored pursuing a more exciting uniform design. A prototype made by a local designer featured ultraviolet-sensitive ink that would glow under black lights, but the Sixers decided against it and stuck with the jerseys they had.

The design and release of new uniforms in sports is one of the most exciting facets of team pride. Jerseys are probably the most direct way fans are able to show their everyday support, whether at the game or as part of their regular wardrobe, and the popularity of new uniforms has only increased in recent years.

Among all sports, the NBA arguably has the most inventive and experimental approach to uniform design. The Sixers, historically, have stuck to pretty conservative jerseys with the exception of the early nineties look and the Allen Iverson-era uniforms that came with a much larger overhaul of the team's branding.

In more recent years, the Sixers have returned to the classic look for their primary jerseys, but they've been able to have fun with the NBA's alternate City Edition and Earned Edition uniforms. The Boathouse Row jerseys and the Spectrum tribute uniforms this season are both pretty adventurous by Sixers standards.

Last month, a man named Ivan Stiles quietly posted photos on Facebook showing the prototype and original illustration of a jersey design he had come up with for the Sixers in the early 1980's. Stiles explained that the jerseys were made to glow under black lights, which would be installed on the home court for pregame introductions. This prototype was for the team's red road uniforms.

Another TBT — Back in the early '80s, I worked for an advertising agency charged with giving the Sixers a new look which...

On Friday, Uni Watch's Paul Lukas shared the full story behind the fascinating design proposal, which was ultimately rejected by the Sixers.

Around the time of the team's last championship in 1983, the Sixers considered going for a more exciting look to enhance the fan experience. The team hired prominent local firm Schaefer Advertising to revamp their uniforms and plan out their halftime show, among other changes.

At the time, Stiles was the associate creative director of the firm's art department. Stiles took on the challenge of designing the Sixer' new uniform and getting a prototype made.

Lukas published the transcript of his interview with Stiles, who explained what he could remember about the design process and also shared another illustration of a backup idea he had for the Sixers. Stiles is now a well-known multi-instrumentalist musician and presumably has had this little-known prototype in his possession for almost 40 years

It's unclear why the Sixers decided to ditch the idea of a new uniform at the time — or this design specifically, even putting the black light concept aside. The team wound up keeping their classic jerseys until 1991, and Stiles never was told what happened or given feedback from the team about his idea.

The full interview is well worth the read and offers some very cool insight into a path the Sixers might have followed in an alternate universe.