Does it actually matter if the Sixers trade Ben Simmons this year? 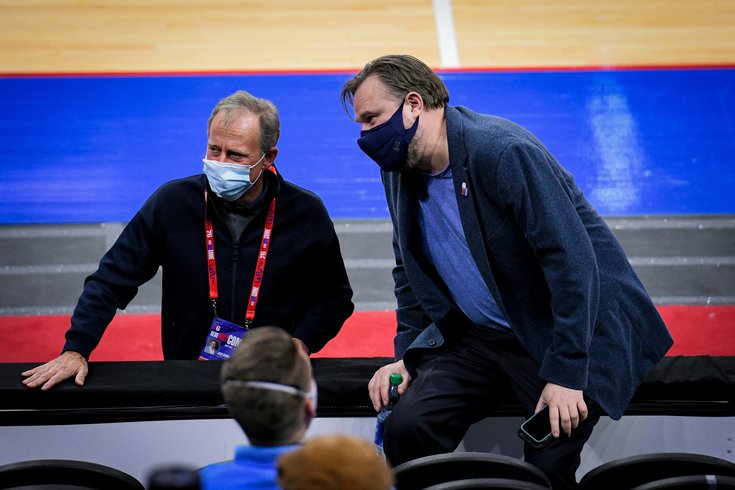 The debate regarding Ben Simmons for most of this season has centered around how his absence impacts everyone that isn’t Ben Simmons. In fact, the primary argument is about the co-star he left behind — the Sixers have to make a trade, the story goes, so that they don’t waste a year of Joel Embiid’s prime.

It’s an admirable way of looking at this situation, even if there are selfish motivations behind it. Hell, the selfish person in me would like for the Sixers to make a move so that I have a better team to cover, and thus a more interesting product to talk about with fans. But in all likelihood, it’s a moot point. If a year without competing for a title is a waste, this year is probably already shot even if the Sixers make a lights-out deal before the deadline.

A question to chew on for a moment: when is the last time a title-winner traded for the second-best player (or for that matter, best player) on their team in the middle of the season they won it? The closest recent case would probably be 2008, when the Lakers picked up Pau Gasol in early February before losing in the ‘08 Finals to Doc Rivers’ Celtics, L.A. ultimately winning the next two titles in 2009 and 2010.

Those Lakers are also a useful example because of their opponent’s contrasting journey. The 2008 Celtics came together the previous offseason, with the summer deals for Kevin Garnett and Ray Allen giving Boston an offseason, training camp, and full season to build sweat equity together. That’s a reductive explanation for the outcome (and Lakers fans still probably wonder how it would have gone if Andrew Bynum had been healthy), but that year is also an outlier in how close a midseason, star-level deal can push a team to the ultimate goal.

There are numerous reasons why this tends to be the case, but two stand out above the rest:

The wheels of star trades tend to turn slowly, if you couldn’t tell from Damian Lillard spending months of his time denying he wants out of Portland, or from the lingering situation here in Philadelphia. Trading a face-of-the-franchise type is a calculation made with both basketball and the mega-business of operating a franchise in mind. It’s human nature to want to hold onto the good people and things you do have in your building, even when the relationship looks doomed from the outside. The same applies to the players involved. The league has looked on waiting for Bradley Beal to make a trade request for what feels like years now, with little movement made in the meantime. The Boston Celtics have a yearly implosion at this point, but theoretical Jaylen Brown trades still seem more like podcast fodder than real possibilities.

That’s why you see the trade market in the state it's currently in. Dating back to the preseason, combinations of in-prime stars, ascending players, and draft picks have been discussed on their merits as the Philadelphia brain trust decides what to do with Simmons. The Sixers have at times focused on a small handful of players, Lillard included, who represent the co-star Embiid needs to take their franchise to the next level, but the Sixers have not operated from a position as narrow as “Lillard or bust.” They’ve simply insisted talent and fit both matter.

Use the Kings as an example. Sacramento is now reportedly open to making De’Aaron Fox and/or Tyrese Haliburton available in the right deals, and those aren’t equal propositions for Philadelphia. In all likelihood, sources say, a deal involving Fox would almost certainly have to be a three-team deal, moving Fox to another party in order to get what the Sixers think they need. And while the Sixers like Haliburton and feel good about his potential fit, the sense is he’s not at the level they’re after for a primary piece in return for Simmons, that the Iowa State product would need to be one part in a more extravagant return.

Tyrese Maxey’s emergence looms large in all of this, with Philadelphia seeing redundancy between Maxey and players like Fox, preferring to keep rolling with the hard-working kid they already have in-house. But Maxey’s trajectory also shows the importance of time spent together for teammates. Last season, one of the most common sights during Embiid-Maxey minutes was a dressing down of the rookie when he wasn’t where the big man wanted him to be, when an entry pass was placed poorly, or a mistake was made that Embiid felt was fixable. It has taken until recently, over a year since they began working together, for the two to find trust and real flashes of chemistry working off of one another. You can do your best to accelerate development and force-feed reps between teammates, but nothing is a substitute for time together, your craft sharpened over countless hours working toward a common goal.

None of this means, of course, that the Sixers can’t make (or attempt to make) a home-run trade before this year’s deadline. And in terms of historic comps, there aren’t many for this Sixers group. To sum it up — last year’s No. 1 seed in the East has had their lead playmaker sit out almost half of the season with no ability to replace him and has still won at a 56-win pace when Embiid is on the floor.

You could argue, perhaps even credibly, that they are a sleeping giant just by virtue of having Embiid. And if the best possible deal for Simmons emerges over the next month, you certainly don’t hold off on making it because a title push has historically slim odds this year. But if the market doesn’t change over the next month, the question that has to be asked is what the Sixers actually lose out on by waiting until the summer to get something done.

By virtue of being in this position on January 7th, they’ve essentially made their bed for this season. If that’s a point you feel they need to be taken to task for, that’s a worthwhile discussion to have. They know the fragility of the Embiid experience better than anyone, and they still chose to wait on moving Simmons at a later moment, which is not necessarily going to be the “right” moment. There have been suggestions around the organization throughout this process that perhaps Simmons will just show up and rejoin them, claims that only seem more outrageous with each passing day. Those debates, though, do not change where they find themselves currently.

Maybe the right move or set of moves pre-deadline pushes them to a place where they can credibly compete to get to a Conference Finals, which would be a step forward for the organization after falling short of that round for 21 years. And the momentum sustained from a run like that should not be taken for granted, both because of how it could be used as a recruiting tool and for the development it would foster in everyone from Maxey up through Embiid. Deep playoff reps are always a good thing, even if the end result is a better, more entrenched team humbling you in late May and early June.

Embiid has been dominant enough in recent weeks to tease you with the idea that he is ready to be the title-winning leader right now. If that is the case, if the Sixers can harken back to the days of big men dominating the league when it truly matters, perhaps a co-star for Embiid doesn’t have to be as big and blinding as you’d think to push them over the top. Maybe he can make them better than the sum of their parts. A Simmons trade would not be a team swapping out one good player for another, it would be the Sixers getting reinforcements for a guy who quite literally is giving them nothing this year.

It’s just more likely that anything they do this season isn’t going to truly matter until next year. If the North Star for the franchise is becoming a contender, that possibility is probably a year off regardless. So even if it drives the entire city insane, myself included, there’s plenty of justification to push this saga another five to six months into the future, waiting for just one angsty star to fall from the sky.