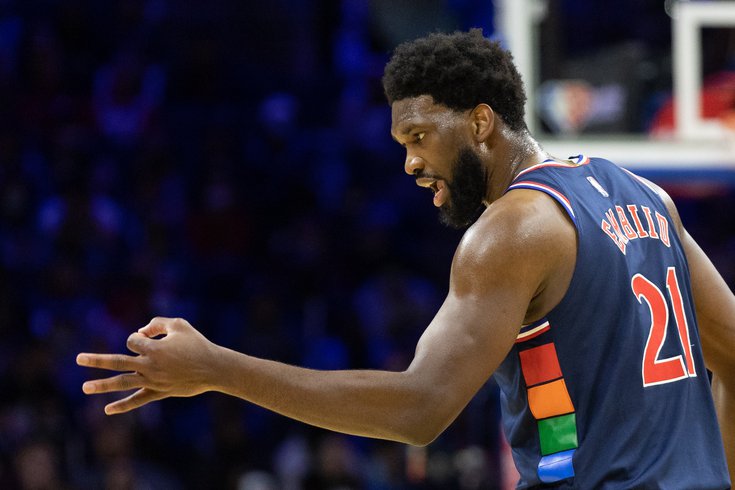 The Sixers threw a hellacious haymaker to open Friday's game against the Spurs and never looked back, coasting to a 119-100 victory over San Antonio behind another 30+ point performance from Joel Embiid.

• If you throw out the quality of opponent, Friday night's first quarter is the best opening 12 minutes the Sixers have played all season. They were absolutely on fire offensively, bullied an undermanned Spurs team on the other end, and looked like a group that wanted to put this game to bed early. By doing the early work, Philadelphia ensured this one was going to be a snoozer for most of the night, and that's the exact approach they've been missing in other games this season.

A lot of credit goes to the big dawg leading the way. Embiid played with a physical presence from the opening tip, putting starting Spurs center Jakob Poeltl in foul trouble before two minutes of the game had gone by. That's a bigger deal than you might think — Poeltl is one of the league's more underrated defensive players, and removing him made life easier for everybody, not just Embiid, who would continue to earn trips to the line as the first quarter wore on.

With Dejounte Murray attempting to jumpstart San Antonio's offense on the other end, Embiid also did an excellent job of corralling their lead ballhandler, staying close enough to prevent pull-up jumpers while still preventing him from getting to the rim. It led to a lot of jump passes and clunky possessions for the Spurs, and they did not come close to shooting their way out of it.

The real key to Philadelphia's success, though, was Philadelphia running one of their bread and butter plays, an "Iverson cut" for Seth Curry into a DHO for Curry and Embiid, with Curry absolutely shooting the lights out to start the game. They ran it from both sides of the floor, they ran it on consecutive plays, and the Spurs had absolutely no answer for it, leading to a combined 24 points from Curry and Embiid in the first quarter.

While we're here, worth bringing up that Curry is on track to have perhaps the greatest midrange season of all time, one year after Embiid nearly won an MVP with an insanely efficient, high-volume year from midrange. I would not have put my money on the first two versions of a Daryl Morey Sixers team having outlier seasons on long twos. Regardless, Curry and Embiid flow in and out of their handoffs as if they share the same brain and body most of the time, so it's no surprise that they continue to kill teams out of that look.

While Doc Rivers does not always leave players in the game who have it going (much to my chagrin), he has instilled in his team the importance of continuing to run what works, and Friday we saw frequent uses of the universal sign for Sixers success — a one-finger twirl after a bucket that indicated to run it again. Philadelphia played the hits against the Spurs, and it worked well enough.

• Tobias Harris said what he needed to say about his recent play and the booing debate on Wednesday, and then he left it all behind on Friday night, playing decisive, efficient basketball while continuing to do the little things even when his number wasn't called on offense.

Not everything from this game was replicable — he bailed Embiid out of a poor pass with an extremely difficult make on a runner in the first half — but you saw the versatility that made Philadelphia covet him in the first place three years ago. The opening bucket of the game was a beautiful bounce pass from Embiid to a cutting Harris, and he followed that by scoring on post-ups, offensive rebounds, and pushing the pace in transition, leaking out for a bucket or two before the Spurs could get set. Matchups with rookie Josh Primo were particularly fruitful for Harris, who leveraged the size and strength gap to put him at a constant disadvantage on Friday night.

And once Harris saw the ball go down a few times, he seemed to find the touch they've needed from him all season, knocking down some tough midrange looks to put together a quietly dominant night on offense. He didn't need a whole lot of touches, and this performance was about Harris filling in where they needed it and when they needed it. He's not going to be close to perfect from the field all the time, but this is a game to build on for him.

• Embiid going up for dunks can be a dicey proposition, and while I don't have the exact numbers on this, a decent chunk of his health issues over the years were the product of the big guy putting himself in harm's way trying to slam the ball. A little discretion is appreciated around these parts.

Then you see him do something like this, and nearly see him put Drew Eubanks on a poster on another play, and all caution goes out the window:

the kid at the end is all of us. 😄 pic.twitter.com/0cdI7KZwLH

The angle doesn't really do that play justice — the side profile was tremendous in the arena — but the crowd going absolutely ballistic at the sight tells you all you need to know. This was a night where Embiid the showman was as good, if not better than Embiid the basketball player, with the big guy taking advantage of a bunch of long runways to dunk on the Spurs.

The crazy thing is, that wasn't even the best highlight of the first half for Embiid, who threw a behind the head dime to Matisse Thybulle for a dunk moments earlier:

A quick, and frankly more important sidebar — in recent weeks, Matisse Thybulle has had increased success playing in and around the dunker's spot, learning when and how to time his cuts in order to give Embiid an outlet when doubles come. Considering all the consternation over his fit in the lineup, including from this writer, it's a moderately big deal that he has figured out a way to help Embiid on offense while continuing to play the same brand of defense that won over so many people previously. With shooting and creation at the other spots on the floor, the Sixers have a path back toward the sort of offense they played early this year.

It seems crazy to think that Embiid is actively getting better still, but you watch him play and see him doing new and exciting things on a regular basis and almost have to believe that. The best part is, the team is following his lead all over the floor. When Embiid hit the floor for a loose ball in the first half, it was Georges Niang who came up with the loose ball and eventually hit Seth Curry for a made three. Embiid was the guy getting flashy assists, and the rest of the team followed suit with excellent ball movement.

This guy is on a level very few players in the league can hit right now. The game looks easy for him, and he is bringing his team along for the ride.

• When you can get the end-of-bench guys involved in a game and have things run smoothly, that's a huge win for almost any coach. Credit to Charlie Brown Jr., making his Sixers debut, for looking completely at home on an NBA floor in limited minutes Friday.

An inexperienced guard sharing the floor with Embiid only needs to do a few things — space the floor, stay locked in on defense, and attack when the opening is there. Brown did all of the above, playing some disruptive defense away from the ball and running the floor in transition, scoring through contact for a nice finish on the break early in Friday night's game. Brown even played some nice individual man defense on Dejounte Murray, one of the only Spurs players who offered any threat on Friday night.

It might not matter for his future in Philadelphia, where the roster is filled up at the moment, but this is tape he can show other teams to make his case for a shot in the league. It's always a joy to see a local kid shine when given their shot.

(Maybe it should signal to Daryl Morey and Co. that they simply need more athletes on the roster. Brown stepping in and immediately giving them a lift suggests they might just need a bit more steel.)

• Nobody gets more excited about positive plays he's involved in, or even just standing by, than Niang. Beyond being a useful role player, he seems like a guy you'd love to play with for his spirit alone.

• Did the Sixers have their best defensive performance against San Antonio? Probably not. They were fortunate that some open Spurs threes didn't drop, which probably inflated the final margin a little bit. But there was still a lot to like throughout this one — Embiid committing to playing high to slow down pick-and-rolls, sharp rotations, and plenty of solid individual defense throughout the night. I'm inclined to just leave it there rather than worrying too much about the details.

• Andre Drummond had some good moments in this one, but this was a great example of something Doc Rivers said before the game — he makes tremendous passes, and he makes "tremendous" passes, and you don't always know which you're going to get from him on a moment-to-moment basis. Apply that to the rest of his game, and you basically have a summary of Drummond's career, as well as an explanation for why he's a backup center and not a big-money guy starting somewhere else.

• One Harris-related complaint during a good game — Rivers has continued to lean on him as a second-unit leader by staggering their lineups more following Dan Burke's run in the lead chair, and the willingness to do that is a big step from Rivers. The less we see all-bench groups, the better.

Unfortunately, the offense was rather ugly when they tried to center Harris in the offense with those groups, and that said as much or more about their lack of ballhandlers as it did Harris. Even when Tyrese Maxey comes back, this feels like a team in need of another creator to really get where they want to go.

• They played a lot of Prince in the arena on Friday night, which I guess was connected to the Spectrum theme in the building, and never got around to Let's Go Crazy. For shame, DJ Ghost.

• Bless Dejounte Murray for trying to get his teammates involved, but that guy should be attacking far more often and have a lot more freedom to hunt his own shots within San Antonio's offense. Once he started to attack more often, the Spurs looked like a different team. Selflessness is great and all, but just go hoop, young man.

(He's a delight to watch in any case. Tenacious defender, creative handle, and the team-first thing is a good sign.)