What should we make of this recent trade rumor? 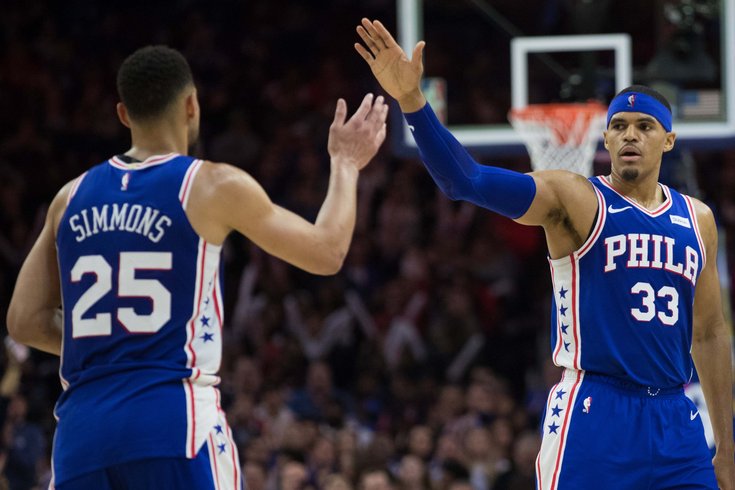 With just under a month to go until the 2022 NBA trade deadline, it's hard to tell yet whether the league is set for an active, trade-heavy period or just setting everyone up for disappointment with rumors. But one thing is certain — Ben Simmons continues to be one of the biggest names on the market, and he's likely to draw half of the league into his vortex, including his Sixers teammates.

On Tuesday morning, ESPN's Brian Windhorst and Marc Spears got together to discuss a number of topics on the Hoop Collective podcast, including the current Simmons market and the recent Hawks-related rumors we touched on Monday. And the duo went long on a scenario that hasn't popped up yet to this point, one that has Philadelphia shopping Tobias Harris as part of the deal. For full context:

SPEARS: I think it’s a longshot, and it’s not because of Ben, it’s because I’m hearing that they want to include Tobias Harris.

SPEARS: That’s a lot of money, man. So it’s already complicated enough to trade Ben Simmons, but I can only imagine Travis [Schlenk] getting that call from Daryl Morey like, wait wait wait, can we just talk to you about Ben? Why are you trying to pass Tobias to me?

WINDHORST: That is the word out there, that because they can’t necessarily get an All-Star that they want in return right now, that as the Sixers have continued their talks, they have talked to teams about trading Tobias and Ben. That $72 million, which means you’d need $56 million or so to trade out to make it happen, you’d have to trade a minimum of $56 million to trade for those two guys. You may say to yourself, this is what I said to myself, Tobias is not having a terrific season, and I do think that’s partially because he doesn’t have Ben.

They have made due with guys who are not really point guards. I know that Tyrese Maxey has had a good year and people are excited about him, but he’s not a true point guard. [Harris is] putting up good numbers, but his shooting is down, and he just hasn’t had the same impact. So I ask the question Spears, why would they want to do that? Why would, Tobias Harris is a good player, he’s on a contract that’s too high probably, but he’s a good player, why would they want to do that?

SPEARS: The gist I’m getting is Atlanta was interested until they brought Tobias’ name up. [ESPN]

There's more to get to, but let's unpack this part first. The Sixers have denied they are actively shopping Tobias Harris every time the suggestion has come up since last June, reaffirming his importance to their team, locker room, etc. each time. They have continued to do so in recent weeks, though the most important thing to note about Philadelphia's position is that there is only one untouchable player on this roster. Joel Embiid is the organization's north star, and any move(s) made are going to center around how they can best support him, no matter who or what has to get moved in order to make that happen.

That does not necessarily mean Harris is anchored to Simmons in all their trade talks. Based on recent conversations, four of the teams most actively interested in Simmons are the Kings, Hawks, Timberwolves, and Pacers. At least three of those teams (Sacramento, Atlanta, Indiana) have potential trade packages that feature or have to involve by default a forward who is redundant with Harris in Philadelphia.

For example, as we reported over the weekend, were the Sixers to make a deal with the Kings (and if the Kings are truly making their young guards available), Philadelphia would only be interested in Kings guard DeAaron Fox as a player to re-route to a third team to get what they want. Direct deals would feature Tyrese Haliburton prominently, which would mean Kings forward Harrison Barnes is more likely to be involved simply to make the money work, as Haliburton is on a much cheaper rookie deal compared to Fox.

The Atlanta example is more recent, and perhaps more relevant. John Collins has expressed displeasure in the press recently and is said to be disgruntled, with Shams Charania reporting Monday that he is "increasingly frustrated" with his role inside the Hawks. That makes him a central figure in any potential trade discussions, and as we wrote about here Monday, acquiring Collins would almost certainly necessitate a Harris move, either as part of one transaction or a corresponding move.

The problem with the rumor on the whole? It runs counter to the Sixers' overarching position over the last six months or so. Ben Simmons is on the roster as a result of their desire to maximize return on their disgruntled star if they move him this year. With Harris' value at perhaps its lowest during his Sixers tenure, making his inclusion a requirement in any Simmons deal would be, to say the least, hustlin' backward.

If a multi-team construct can be put together where they move Harris and maximize return on Simmons in the same breath, it would certainly be considered. But that's a function of leaving no stone unturned, rather than the Sixers trying to force-feed a mega-trade before the deadline.

To that end, Windhorst and Spears' discussion continued after a commercial break, with Windhorst trying to get to the answer of why the Sixers might do this. And to make sure the picture is painted completely, here is a full snapshot of what Windhorst says other executives believe about such a rumor:

WINDHORST: So I asked the question, why would they be looking to offload Tobias Harris, and the answer I got, what executives think, and look, Daryl could be playing some sort of game. When Daryl is trying to do something, you always have to look four steps down. Sometimes you can’t even see what he’s trying to do. Executives think one of their options, it’s not the thing they may be most likely to do, but one of their options is they want to make a run at James Harden next summer. Harden can opt out of his contract, he elected not to extend, obviously there’s the connection with Daryl Morey, they tried to get him in a trade last year. I don’t know whether he would leave the Nets. Now by the way, even if you offloaded these two guys, you’d still be taking back money, it wouldn’t necessarily mean that you could have enough money, I think James Harden’s number is like $48 million.

Would the Sixers be interested in getting a Harden-level player next to Joel Embiid? Of that, there is no doubt. Despite a tough start to the year, Harden has rallied over the last month or so to look closer to the player the Sixers were chasing when they offered Simmons and more up for him last season. There are still concerns about him in the short and medium-term, but at his best, Harden is still capable of special performances, toggling between scoring and playmaking as the game warrants it.

But offloading Harris pre-deadline, as part of a Simmons deal, in an effort to eventually sign Harden in free agency would be complete lunacy. It is the sort of move teams make when they have nothing currently going for them, a 2009 Knicks type move, where you basically punt the rest of the year in the hope that you can line up big-money moves in the offseason. There's no indication the Sixers are at that point, and if anything, Embiid's run of dominance has given them the opposite motivation. They have an incentive to provide support for Embiid here and now as he plays at an MVP level and pushes the Sixers further up the Eastern Conference standings every day.

If the deadline comes and goes and the Sixers reach the point where Harden is not just a possibility but in the cards this summer, moving Harris' contract to facilitate such a move is something that can be done then and there. The Sixers have control of most of their own picks, young and cost-controlled talent, and a superstar to serve as a running mate with any big-name acquisition. Selling out in January or February with nothing more than hope on the brain would not just be foolish, but completely unnecessary, because recent history has shown you can move basically any contract if and when you need to so long as you incentivize the team on the other side of the deal.

None of this is to say a Harris-related deal or a Harris and Simmons deal should be ruled out pre-deadline. Dating back to the preseason, team sources have suggested the front office is flexible on what the return for Simmons looks like so long as a deal makes them better and/or provides them with better championship odds moving forward. The calculus is based on a number of factors, from present production to financial flexibility to fit with Embiid, which is why their Sacramento preferences have been so telling. Fox has the bigger numbers, but he also has the bigger contract, more overlap with Tyrese Maxey, and more red flags next to Embiid than Haliburton has.

But as we've reiterated several times over recently, there's no guarantee the Sixers are going to move Simmons before the deadline, let alone Simmons and Harris as part of some multi-team monstrosity. The only thing you can be sure of is that Morey will entertain any theoretical package that makes the team better around Embiid and provides the big man with the best chance possible to lead Philly to a title. Until February 10th passes, expect to hear a lot of noise coming out of the practice facility in Camden.