There are no good outcomes for the Sixers this weekend 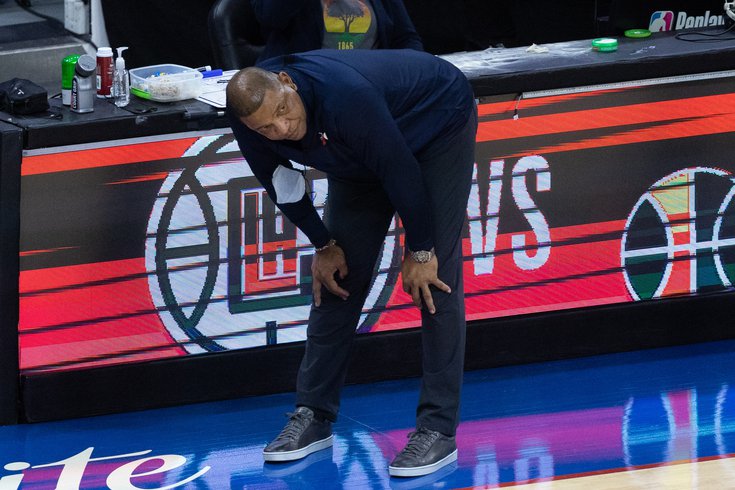 The Sixers are in Atlanta for Game 6 against the Hawks. Their season is on the line. And potentially the future of this current core.

But more than that, legacy is on the line. Whether we're talking about debating the merits of The Process or how we'll ultimately remember Doc Rivers as a head coach, there's much more than a berth in the Eastern Conference Finals at stake in this one.

Also at stake is the mental health of the entire Delaware Valley and anyone who considers themselves a Sixers fan, because after these last two losses — and this entire series, for that matter — they're in a fragile state, wildly careening between uber-confidence about their team's chances of doing something less than 20% of NBA teams in this scenario have accomplished and the deepest, darkest depression you'll find. Not to mention the anger. Much of that has to do with the expectations placed on this team, which were deserved after several years of working out how to win in the playoffs and capping that off by earning the No. 1 seed in the Eastern Conference with a veteran coach and better pieces around their stars.

Everything was going to plan for the Sixers. And then Joel Embiid got hurt, Ben Simmons once again forgot how to shoot free throws, Tobias Harris disappeared in the clutch, Danny Green was lost for the Hawks series (and beyond), and the head coach showed the same warts that have cost his teams in the past. A lot of these are issues Sixers fans were hoping wouldn't pop up despite evidence that this is exactly where we've been headed.

Apologies if this all sounds a little doom-and-gloom, especially coming from someone who tends to be a glass-half-full type of guy, but I've decided I'm done letting "expectations" get the better of me. I'm done letting the Sixers trick me into thinking it's going to be different this time, like a serial cheater trying to convince his wife he's a changed man. For one game, at least, I've decided to embrace the darkness. That way, if the Sixers drop their third straight game to the Hawks on Friday night, I won't be upset. It will be what I'm expecting.

But it's more than that. For the mental (and in some cases even physical) health of every Sixers fan everywhere, the Sixers losing Game 6 is the best possible outcome. Heck, it might even be the best outcome for the team itself.

By the end of this weekend, the Sixers' season will either officially be over, or they'll be moving on to the Eastern Conference Finals, which despite everything you're reading here still remains a very real possibility. There is no in-between. The only question that remains is how this all plays out, and it essentially comes down to three scenarios.

Let's do a quick thought experiment and follow each outcome to its logical potential conclusion and you can decide for yourself which outcome you think is the best...

First off, State Farm Arena is not an easy place to win. The Hawks have been very good there this season since Nate McMillan took over (20-3) and it safe to bet it'll be hopping for Game 6. The Sixers are currently a three-point favorite at multiple sportsbooks, according to Pickswise, but for this scenario we're assuming a loss — they were favored in each of their losses this season. And if we're assuming a loss, then the best possible way for that to happen is for the Hawks to get off to a hot start, jump out early, and go on to lead wire-to-wire for the win.

Sixers fans will be able to resign themselves to their fate early and begin discussing their offseason plans, both personally and for the team they're watching. Additionally, losing now would shine more of a light on the team's Ben Simmons issue. It would also prevent Joel Embiid from further injuring his knee. I'm not a doctor, but the number of times he falls to the ground grabbing his knee can't be good, and a quicker exit gives him more time to heal and recover.

However, it would be considerably more difficult to swallow if Game 6 plays out like Games 4 and 5, with the Sixers building a comfortable lead and blowing it down the stretch again. While that scenario might lead to more offseason changes (three straight double-digit blown leads should), it would be infuriating, especially if the Sixers look as good early as they did in Game 5. If they do, Sixers fans will begin to talk themselves into their team coming back and winning the series and then facing the Nets or Bucks in the Conference Finals — Philly tends to have a little supporter's whiplash in that regard — only to then watch Trae Young and the Hawks rip their collective heart out for the third time in a week. We're a fragile bunch in Philly, and most are in an even more delicate position than usual, so that type of loss could put Sixers fans over the edge.

But even that scenario is far more preferable to the Sixers' other options...

Scenario 2: The ultimate heart-breaker for Philly

The Sixers win in Atlanta, lose Game 7 at home

I'm not even touching this one. This city still hasn't recovered from the Sixers' last Game 7 loss. All you have to say is quadruple doink and ... see, see how that made you feel? Now imagine it happening again, in Philly, when the Sixers are favored to win. And if it goes down like Game 5?

But, believe it or not, that still might not be the worst-case scenario for Sixers fans...

We've talked a bit about expectations here, and managing them is one of the keys to happiness. In sports. In Life. Whenever. If you expect greatness and get mediocrity, it's going to feel like you're being served shit. But if you plan for the shit, getting a dose of that same mediocrity is going to make you feel like a big winner. Brains are weird.

Anyway, our last scenario was so bad because of the false hope and heightened expectations that came along with the Sixers winning Friday night and sending the series back to Philly for a Game 7. Now, imagine they win that Game 7 as well and take the series. What do you think the average Sixers fan's expectations are going to be then?

And what do they get as a reward? A matchup against either the Nets or the Bucks. And what do Sixers fans get? The guarantee of at least four more games of pulling out their hair and stressing over every Simmons free throw or Embiid dunk attempt, and possibly as many as seven. After what this Hawks series has done to the collective mental health of Sixers fans, do you really want to endure that again, in a series where the stakes are even higher and the opponent much more formidable? Maybe you do. Philly fans are masochists.

Philadelphia sports exist to see how far you can push a human being before they break.

You want to know another way brains are weird? Just you sitting there reading about a potential matchup between the Sixers and the Nets/Bucks have you already thinking Philly would stand a chance in that series, forgetting everything you've seen over the last five games against Atlanta. When we started this story, you were probably of the belief the Sixers' season was likely ending this weekend, and just a few hundred words later you've got yourself convinced there's a path for them to make it to the Finals. Now imagine what you'd feel like if they actually pulled it off and beat the Hawks twice?

See, you can say all you want about the entering the Eastern Conference Finals with more realistic expectations, now that you're more aware of the flaws in this Sixers teams, ones that many turned a blind eye to during the regular season because they were able to win in spite of those issues. But, be honest, would you really? Hell no.

And do you really foresee a matchup with the Nets or Bucks going any better than this one against the Hawks? Maybe it could in the sense that the Sixers would be clearly outmatched from the jump, but more likely there are going to be moments where you again think the Sixers stand a chance only to get your heart broken. Playing for a trip to the Finals would at least be a step in the right direction for these Sixers, who failed to reach that round in recent playoff berths. And it might be fun for a little bit, but it's hard to see it ending with a series win.

Embiid's knee isn't getting better. Simmons isn't magically fixing any of his issues, especially the free throw shooting he recently admitted was mental. And both of their potential opponents are far better than the Hawks — one of the big hopes for Sixers fans heading into this series is that their team would make quick work of the Hawks and have plenty of time to rest as the Bucks and Nets battled it out over a long series. But only one of those things actually materialized.

Being a sports fan is an emotional roller coaster, especially in the playoffs. And knowing Philly fans, all of this advice is likely going to fall on deaf ears that are only capable of hearing "Sixers in 7."

Of course, the Sixers could prove me wrong and go win the whole damn thing. And I would love that — not only would that be wonderful for business, it would also be great personally, as many of my best friends are diehard Sixers fans — but for now, I'm operating with the expectation that the Sixers season will mercifully come to an end on Friday night in Atlanta. In part because that would be what's best for everyone involved. In part because it's hard to shake what we watched the last two games. But mostly because that way, I won't be disappointed.