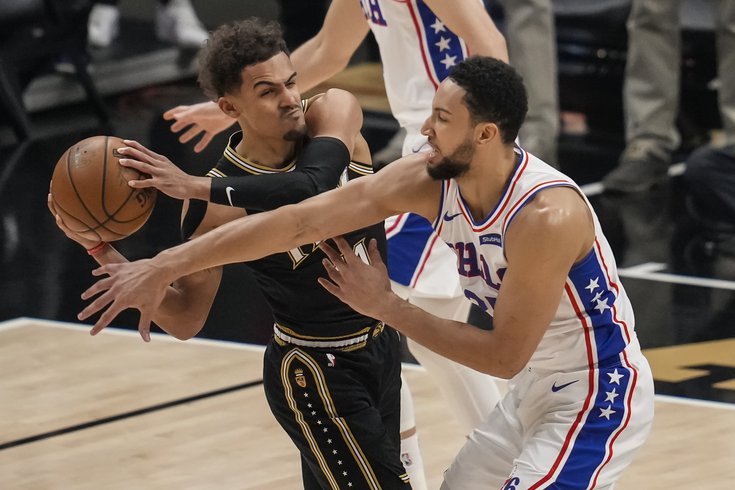 Even Trae Young wasn't sure what happened.

The Atlanta Hawks star was the guest on the latest episode of JJ Redick's podcast, The Old Man and the Three, released Friday.

And, inevitably, Ben Simmons' passed-up dunk in Game 7 was brought up.

"I didn't realize in the moment what it was," Young told the former Sixers sharpshooter.

A recap of the infamous play: With the Sixers trailing late in the fourth quarter, Simmons took the ball, backed in toward the basket and spun off his defender Danilo Gallinari to create an opening for a dunk. Young slid over to try and defend, but instead of going up, Simmons passed out to Matisse Thybulle, who had two Hawks close in on him immediately.

The Sixers went on to lose the game and the series. The passed-up dunk became the defining moment of a failed season and marked the beginning of the end for Ben Simmons' run in Philly.

"If he would've turned and faced the basket and kept it high, there's no reason to foul and get him an and-1," Young said as he recalled his options at that moment. "But if he did what he was doing, which was take a low dribble, I think he spun and took a low dribble, I would've fouled him and not let him get the shot off or try to hit the ball or just try to hit his arm and send him to the free-throw line.

"But I think he kinda knew I was gonna come over and foul him and that's why he passed it up."

Shooting and free throws have been Simmons' kryptonite through his career thus far, and a seeming refusal to improve on them reached a boiling point with the Sixers fans in the 2021 playoffs.

Redick has defended Simmons in the past for everything else he does well on the court, and that didn't change with this conversation.

Young agreed and threw out that the play moved so fast that the 6'11" Simmons might not have even realized it was a 6' guard trying to clamp down on him until after the whistle.

"He sees a blue jersey (Thybulle) right behind me that he can just drop off and maybe get a layup," Young said. "It's a bang-bang play, and it sucks for him. I understand that's a tough play.

"He's a good player. I hate how people talk about how bad of a player he is. That's what I'm saying about recency bias because I think he's a really good player. But I think one moment can get people turning."

It's been nearly a year since that dark day in Philly sports and a lot has changed in the time since.

The 23-year-old Young has grown into one of the NBA's top stars and has relished the role of being one of the league's biggest heels.

"It's no other feeling whenever you go on the road, especially when you're playing in an arena like Philly, and their fans starting booing their own team," Young said. "It's loud. It's crazy. There's no other feeling."

The relationship between Simmons and the Sixers, meanwhile, completely fell apart. The 25-year old held out until the team swung the trade with Brooklyn for James Harden in February.

The Nets had multiple return dates planned for Simmons but all of them fell through due to a herniated disk in his back and lack of mental readiness to play.

He hasn't played since that playoff series against Atlanta 11 months ago.