What they're saying: Ben Simmons isn't playing after all...

The national media, and the internet, weigh in on Ben Simmons' Game 4 scratch by the Nets 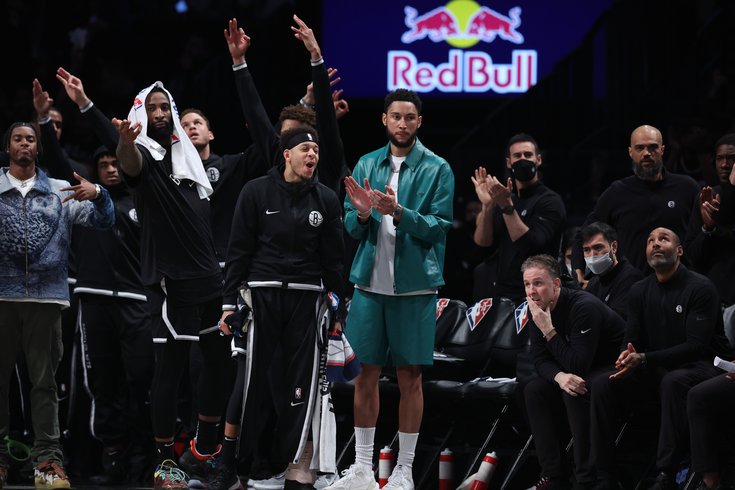 Ben Simmons' return to the court will have to wait until next season.

Ben Simmons was going to play Game 4 for the Brooklyn Nets. Now he isn't.

The goal posts have moved again.

Simmons hasn't played an NBA game since that infamous passed up dunk last June, and if things stay the course in the Nets' playoff run (they face elimination down 3-0 to Boston), he won't play at all this year.

Since being traded away for James Harden back in February, there's been a lot of talk, rumors, video (there's always a gym video), and questionable fashion choices surrounding Simmons' possible Nets debut.

Now the parts of the basketball world that aren't at a loss toward the former first overall pick seem to be fed up with the whole situation.

There are a whole lot of Sixers fans saying "I told you so" right now. Here's what everyone else is saying about Ben Simmons.

When league insider Brian Windhorst reported that Simmons was going to play in the Nets-Celtics series a couple weeks ago, even he looked baffled by what he had heard.

But it seemed Brooklyn had something giving them hope. That's out the window now.

Windhorst appeared on ESPN's Get up Monday morning, and based on what he said, the Nets don't sound too happy.

"Ben Simmons is absolutely not a sympathetic character. He is not going to get the benefit of the doubt because of the decisions he has made during the season. And when you hear this, your immediate reaction is he just doesn't want to play in a series that's 3-0. I'll be honest with you, that was my first reaction. When I checked it out and talked to people involved, they were exasperated.

They were just like 'He woke up, and his back hurt, and he wasn't able to play.'

There wasn't much more to say. They're pretty much waiving the white flag on this one. It's extraordinarily disappointing because even though the Nets were down 3-0, they were clinging to the reality that Games 1 and 2 were razor-thin, and getting Simmons back, even if it was just for 15 minutes a night, they were hoping he would be a difference-maker. And to believe that was happening for five or six days with really good optimism from Ben himself, and have that ripped away, extremely upsetting." [ESPN]

Agree with him or not, you can always count on Stephen A Smith to go off. On Monday morning, he went off.

He called out Simmons' apparent disinterest in actually playing, but also the grievance he filed against the Sixers from his holdout and the harm it could cause to the NBA players in the next round of collective bargaining talks.

Smith said on Get Up:

"I feel bad for anybody who was his teammate. He quit on LSU. He quit on the Philadelphia 76ers. And now he ain't showing up for the Brooklyn Nets. We can point to all the excuses, all the rationale behind it that we want to. I do recall, despite him not playing, he still filed a grievance to collect $20 million that he has not earned.

This is one of the most pathetic situations that I've ever seen in my life. He ain't going to war. He ain't going into the octagon. He's not going in the boxing ring. It's pulling teeth to get this man to play basketball. It's pathetic. It's sad. And at the end of the day, when the NBA gets to the collective bargaining table and they go after the players in terms of a pay for play stipulation in the collective bargaining agreement, it's going to be called THE BEN SIMMONS RULE." [ESPN]

He went further on First Take, calling out Simmons' agent Rich Paul too. He also apologized to Daryl Morey. Sixers won the trade.

The (missing) heart of a champion

Simmons also got heavy criticism from the TNT crew, which you'd hope would be taken to heart when it consists of some of basketball's best ever.

Cmon MAN!!! Out for Game 4 when it was rumored you were going to make your debut. This dude has ZERO competitive 🔥.. As small a chance as the Nets have to come back in this series, you still have KD and Kyrie, all you need is to win ONE game and take it from there.. #ManUp pic.twitter.com/Y5smcnQkqZ

Shaquille O'Neal called Simmons' part in the decision not to play, and his handling of it, a "punk move."

Charles Barkley said he knew Simmons wasn't going to play after the Nets went down 3-0 in the series, and that the right move would've been to shoot for Game 3 down 2-0. You at least have to try.

Barkley: "When your team is down two-zip, you gotta try to play."

Instead, Barkley believes Simmons' respect from his teammates is waning.

Barkley: "When the player don't respect you, that's a big deal...Ben is getting to the point now where you're teammates are like 'Yo, man. Does this dude wanna play basketball?' Clearly, it happened in Philly and now it's happening in [in Brooklyn] like 'Yo, man. We need something.'" [TNT]

When Shaq and Chuck are agreeing, you screwed up.

Kenny Smith highlighted the selfishness of it all.

Smith: "At no point in this year have we seen him say 'I'm gonna do this for someone other than myself.' That's what champions do.

At some point, a champion is gonna do something other than for himself." [TNT]

So it's been a lot of frustration on the part of the Nets and the national media.

Social media though? Always having fun.

How can you not with that outfit from Game 3?

Ben Simmons in the background, makes this iconic 😂 pic.twitter.com/1cuonim988

Ben Simmons walking from the locker room to the bench like pic.twitter.com/cuCSvzKkRh

SETH CURRY: How are we losing again?

BEN SIMMONS: The Batman has until midnight to reveal his identity or I’ll give Gotham City something to really laugh about. pic.twitter.com/uXTD2NwpBq

nah Ben Simmons gotta be the worst teammate ever he watching his team fight for their playoff lives while he sitting there like a pack of Skittles 😭 pic.twitter.com/nctc8AEujM

The Nets will try to stave off elimination later tonight. The Sixers, meanwhile, will be looking to close out against Toronto and advance to Round 2.