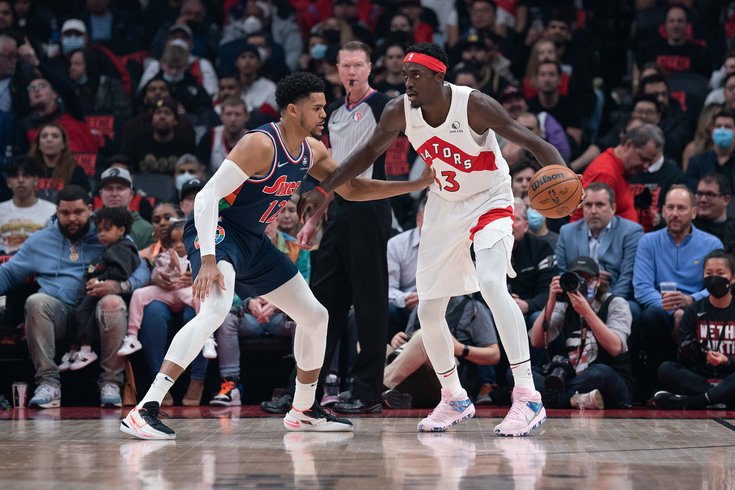 If someone had told me the Sixers would be up 3-1 on the Raptors, I would've been a little shocked. I was a bit pessimistic about the Sixers' chances this series against a Toronto team that matches up really well with them. My jaw would've hit the dang floor if you told me the most consistent Sixer in this series would be Tobias Harris.

Due to that, I'm picking Harris as the person who "won the week" in Philly sports. As a reminder...

Every Monday going forward, I'll pick a Philly sports figure who "won" the previous week. What's the credential for winning? Well, it's ultra-subjective...Harris' numbers this week: 3 games, 15.3 points per game, 11.0 rebounds per game, shooting 56.3 percent from the floor, shooting 50.0 percent from three and a 2-1 record.

Harris looked like the best version of himself in the Sixers' Game 1 over Toronto, dropping a fantastic 26-6-6 line. That was the smooth, sweet-shooting Tobias who Sixers fans have always envisioned themselves getting after the team traded for him back in 2019. The next three games had him looking like a completely different type of player, but a valuable one nonetheless.

With Matisse Thybulle not with the team on the road (very cool!), Harris transformed himself into a defensive stopper against Toronto, particularly in Game 3. Toronto deploys a handful of long, talented two-way wings. With Thybulle out, it fell upon Harris' shoulders to D-up and try to control the game on that end of the court if he was going to be relegated to a fourth option offensively.

The Sixers were behind for nearly the entirety of their Game 3 matchup with the Raptors, but once the second half came, I saw a version of Harris I'd never seen previously. If you knew nothing of his player profile or his contract, you might assume that Harris was some vet grinder who makes his money smothering opponents on the defensive end. He had peak P.J. Tucker energy. Heck, I even threw out a Ron Artest comp for him on Twitter:

Who was this guy digging in on D and locking down opponents?!?

Simply a truly great defensive possession from Tobias Harris in a series full of them for him https://t.co/bKQGTYituB pic.twitter.com/UhhU97De6a

He's turned into a dog this series!

Harris was also the only Sixer with a pulse in their Game 4 loss. Granted, Joel Embiid's thumb injury loomed large, but effort and defense go hand-in-hand, illustrating that Harris is willing to do the dirty work in order to grab a W. There aren't a lot of grinders on contracts worth $180 million, but props is deserved for Harris accepting a role few big-money players would.

It's one of those aspects of basketball that turn me into a full-on boomer, but, man, can the Sixers get a darn rebound?

One of the huge storylines coming into the Sixers' series with the Raptors was the way Toronto keeps possessions alive with offensive rebounds. They were second in the league in offensive boards this season. They've continued to do so against the Sixers. The Raptors have the edge in offensive rebounds 42-32 over the Sixers, leading to multiple infuriating events where Toronto is constantly is getting a shot at second-chance buckets.

Rebounding, much like defense, is an effort-based endeavor. Again, Embiid's injury likely plays a factor here, but it just feels like the Sixers have been completely lackadaisical here. I respect Harris' commitment here to picking up some slack from his teammates, just as he's done defensively. Harris recorded double-doubles in all three of the Sixers' games this past week, bringing some juice to an element of this Sixers team that is severely lacking in it.  For the first time in his Sixers career, Harris is rating super high in Juice Above Replacement. Kudos, Tobi.

Embiid would've been an easy pick if not for suffering a torn ligament in his thumb that severely hampered his play in Game 4 and will require offseason surgery. This isn't a slight to Embiid. It's more so just an understanding that it feels odd to say Embiid "won" the week when he's now dealing with a very rough injury that's clearly taking a toll on him. Close things out on Monday, big fella, and you can have this title to yourself come next week.

Who lost the week: Matisse Thybulle 💉

I hope you enjoyed chilling in Philly while your teammates were battling in the postseason in Canada, Matisse. I'm surprised he didn't live steam him watching the games from home on his YouTube channel!