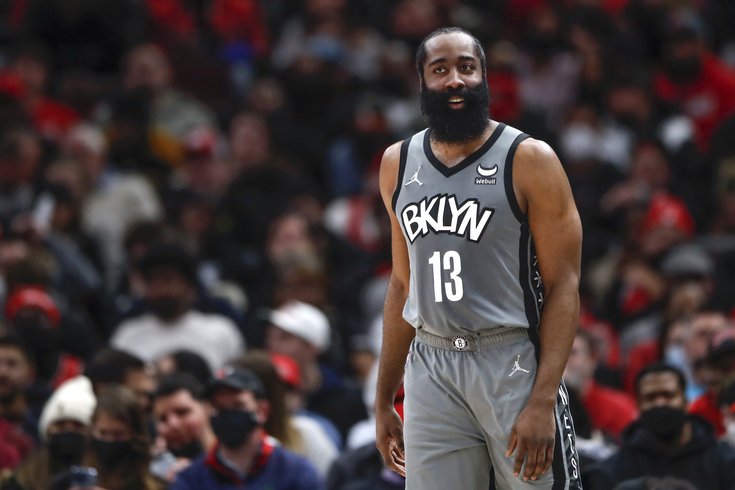 The Sixers are completing a deal to acquire Nets star James Harden, with a package on the way to Brooklyn centered around James Harden, sources confirmed to PhillyVoice on Thursday afternoon.

The full details of the trade are as follows:

This has been a long time coming for Morey and Philadelphia’s front office, whose push to acquire Harden last season was part of the chain of events that pushed Simmons toward the exit in the first place. It took a long road and a lot of patience to get here, but Morey has his guy, and now, the Sixers have a shot.

All eyes will immediately turn to the Embiid/Harden partnership, which has considerable upside but does come with a good deal of risk. The good news is this — Embiid now gets to play next to a true perimeter star, a brighter one than even Jimmy Butler was, who can take some of the burden off of his shoulders and vice versa. Philadelphia’s creative issues go out the window, with one of the league’s best ballhandlers and playmakers now a member of the 76ers.

It is worth noting high up in this story that a down season for Harden represents something like a great year for most players around the league, a 22.5 points/8.0 rebounds/10.2 assists average on 41.4/33.3/86.9 shooting splits. The three-point number is the worrisome mark, with Harden’s slightly-above-average percentage from deep over his career a bit more concerning while playing next to Embiid. That being said, that’s a reflection of Harden’s pull-up volume as much as anything else, and he has considerable playmaking gifts to add along with his scoring. He has evolved from a second-unit leader during his early days in OKC to a legitimate point guard and lead playmaker over time, and will be expected to be the engine of this offense upon arrival.

Fitting Embiid and Harden together is going to take some doing for Philadelphia. Harden is a ball-dominant star whose off-ball work and production has dipped further and further over time, and he’ll now be expected to concede possessions to a post-up big in Embiid. On the other side of the coin, Embiid will have to adapt his style of play in order to be the best offensive partner he can be for Harden, who has thrived playing with bigs who skew toward the high-flying, rim-running archetype. Embiid has made strides as a pick-and-roll big and proved willing to buy into that style when Butler was here during the 2018-19 season, and the bet is that they will ultimately strike a balance that brings the best out of both of them.

(Staggering the two players, mind you, should be a massive priority for Doc Rivers, but it remains to be seen if he will pivot to that relatively normal approach for a multi-star team. Having Harden in the mix to run second units that don’t include Embiid, and vice versa, will give each of Philadelphia’s co-stars the opportunity to lead units built solely around them. Philadelphia’s young, springy bigs, and even a potential replacement for Andre Drummond, stand to benefit a great deal from playing alongside Harden in limited action.)

It’s a huge get for the Sixers, replacing a player who has not suited up once for them this season with a perennial All-NBA player. But major questions remain about Harden, stemming from both the state of his game and health in addition to his body of work, which includes messy exits from his last two franchises in addition to high-profile flameouts in the playoffs.

“Will Harden remain happy here?” is a fair question to ask. You could explain his clashing with past teammates as a product of personalities, with Dwight Howard and Chris Paul both bringing very different demeanors to the table that have rubbed others the wrong way as well. And you can certainly give Harden some leeway for being disengaged as a result of Kyrie Irving leaving his team hanging due to his vaccination status. But there’s a reason Harden reportedly wanted to avoid a public trade request — he’s aware of his reputation, and isn’t interested in perpetuating it.

The (eventual) five-year megadeal you assume the Sixers will sign Harden to comes with considerable risk, as Harden has already shown signs of physical decline this year. A hamstring issue derailed Harden and the Nets late last season, and the lack of explosiveness he has shown at times this season heightens concern about how his body will hold up over the life of this deal. An interesting wrinkle that broke after the deal: Harden agreed to opt-in on the next year of his current contract as part of the deal, so he's locked in for next season already at a minimum.

Philadelphia’s bet is a simple one — Harden’s skill level is high enough for the Sixers to bet on him holding up against the aging curve long enough to compete for and perhaps win a title. Getting a deal done now, rather than waiting for the summer when they might have been able to get him even cheaper, puts them in a position to compete for an Eastern Conference title, even if it will be an uphill climb to try to put together a title winner midseason.

For Simmons, it’s ultimately a disappointing ending to what looked to be a long and prosperous career in Philadelphia, with his final in-game moment here the infamous Game 7 turtling heard around the world. When he first set the scene ablaze during his rookie season, dreams of Simmons’ progress toward the top of the league hierarchy seemed just over the horizon. His ultimate destination drives home how teams around the league view him as the Sixers explored deals over the last six months — a role player (albeit a very good one) who needs to be surrounded by the proper talent, rather than a franchise-driving player who a team can build their foundation around.

From a basketball perspective, this is something like a dream scenario for Simmons. He’ll play with two absolutely elite offensive players who can take creative duties out of his hands when it matters, allowing him to provide value as an elite defensive stopper, playmaker, and transition player. On the other hand, he will also be on a team with a great deal of national scrutiny and with expectations to compete for a title right away, putting his weaknesses and readiness to play on full display whenever he takes the floor again.

Even if you think there is considerable risk in building out around Harden, Daryl Morey has ultimately gotten the last laugh here, shrugging off concerns that he should have made a Simmons deal for a cut-rate price earlier in the year simply to get somebody and something in place around Embiid. By waiting out this situation, the Sixers have ended up with the caliber of player they were chasing all along, an impact player who they believe can help Embiid compete for championships.

This is without question the biggest non-draft acquisition the Sixers have made in decades, arguably their biggest deal since they brought Moses Malone to town in the early 1980s. While Harden has a long way to go to live up to the standard set by the late, great Malone, that is the sort of resume he brings to town. It’s not often a one-time MVP, seven-time All-NBA player, and nine-time All-Star comes to town to join a current MVP candidate. We’ll sort through what it all means later, but savor this for now: James Harden is a member of the 76ers.