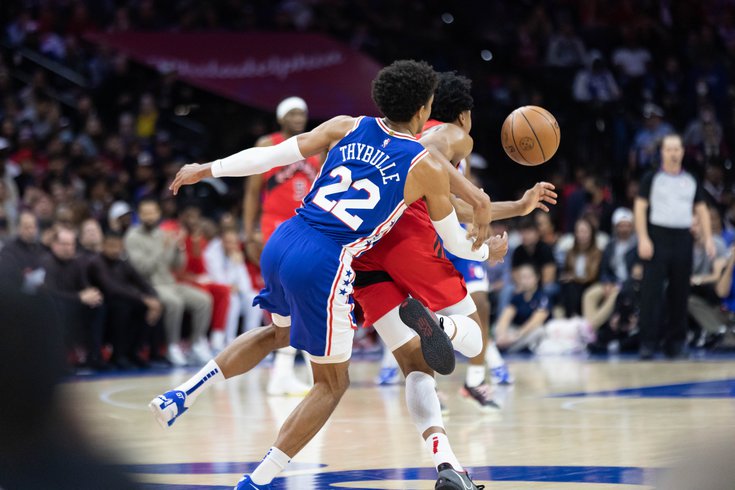 Matisse Thybulle attempts to steal the ball during the Sixers game against the Raptors at the Wells Fargo Center on March 20.

Sixers wing Matisse Thybulle was named to his second consecutive All-Defense team on Friday evening, earning a second-team appearance with 87 total points in the awards voting.

The All-Defense teams were selected as follows:

It's a somewhat surprising though not completely unexpected honor for Thybulle, who continues to put together some downright electric stretches on the defensive end. His ability to slow or shut down individual players, as he did in a primetime game against Golden State earlier this season, helped keep a Sixers team with few plus-defenders to speak of above water. Add on his ability to disrupt in passing lanes, block jumpers and recover from any gambles or mistakes to get back into the play and you have the makings of a great defender.

Without raining on Thybulle's parade too much, I thought this season showed a lot of the limitations of him as a top-assignment defender rather than the jolt of energy you can bring in off of the bench. His habit of taking silly fouls matters a lot more in a role where he's essential rather than a nice bonus behind Ben Simmons, and it put him in jeopardy during some games where they needed him to have a bigger impact on the game.

Weirdly enough, it was Thybulle's offense that held back his defensive impact the most. In a sign of things to come for the postseason, there were a number of games where Doc Rivers had to bench Thybulle to improve the team's spacing on offense, his lack of progress as a shooter provoking teams to simply ignore him on the perimeter. When Thybulle is able to stay on the floor, he remains a unique weapon, but staying on the floor has become a bigger problem as teams have learned to simply leave him alone and live with the results. That will ultimately cap his ceiling moving forward unless he's able to hit the development goals he set for himself at exit interviews.

(That's if he stays here at all. The rumblings are out there that the Sixers would entertain trading Thybulle, and he certainly has some backers around the league. Marc Eversley, the current Bulls executive who made a strong case to draft Thybulle when he was with the Sixers front office, is thought to be one of them.)

The other noteworthy contender for an All-Defense spot was Joel Embiid, but he didn't come all that close to being honored this season, falling 37 points shy of the second-team center, Williams III. That felt like a fair reflection of where he was at as a defender this season — Embiid's best moments and stretches were absolutely All-Defense worthy with the big man capable of putting together dominant two-way runs where he owned the painted area at both ends. But there were a lot of slow starts, a lot of mailed-in first halves to save his legs, and a lot of evidence to ignore to support him on this ballot. Offense came first for him this season, and he should hardly be blamed for not having enough juice to drag them to respectability on both ends at all times.

Here's where I'll take up for Embiid — though he has lamented the disappearance of the "games played" measure for MVP after it loomed large for him in years past, it's more accurate to point out where it was ignored on this ballot. Draymond Green finished with one more point than Embiid and ultimately with a forward spot on the second All-Defense team despite playing just 46 regular-season games. One of those was basically a ceremonial tip-off, Green taking the floor for the first seven seconds of Klay Thompson's return just to take a foul and exit the game for good. Embiid got some leniency with his All-Defense selection last season during a shorter year, and Green was without question one of the league's best defensive players whenever he was healthy this season, but it feels like a good example of arbitrarily picking and choosing when standards for awards are applicable.

In any case, the Sixers of next season will likely need an even better defensive season from Embiid, save for roster changes that alter the look and identity of this group. There are few stoppers and tough guys to speak of on this team, and with James Harden (presumably) around to help take the offensive load from the jump next year, it may be on Embiid to lift them up on the defensive end, saving touches and work for others at the other side. Heavy is the head that wears the Most Valuable Philadelphian crown.