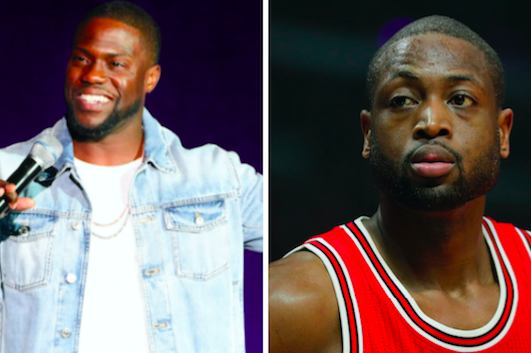 Kevin Hart (L) presents at CinemaCon 2016 in Las Vegas on April 13, 2016. Chicago Bulls' Dwyane Wade looks on during the first half of an NBA basketball game against the Los Angeles Clippers Saturday, Nov. 19, 2016, in Los Angeles.

One the eve of tip-off for the Philadelphia 76ers' 2018-19 season, the team's biggest fan is still getting heat for his antics during last season's playoffs.

The Sixers knocked off the Miami Heat 4-1 in a physical series that wouldn't even have been close had it not been for aging superstar Dwyane Wade, who tormented Philadelphia in crucial situations.

MORE SIXERS: Breaking down Sixers' 2018-19 NBA championship odds and other bets for this season (and beyond)

If you'll recall, Kevin Hart was in Wade's ear like a gnat throughout the Miami series, not that it affected Wade's performance.

.@DwyaneWade talking trash to @KevinHart4real during the game 😂

.@KevinHart4real is about to come to Miami and "heat it up" 😂 pic.twitter.com/xtkySz9cy4

Wade, who will rejoin Miami for another season, apparently never forgot about Hart's antics. He finally exacted a little revenge over the weekend. Joined by wife Gabrielle Union, Wade presented Hart with a youth-sized jersey.

Supporting my brother @kevinhart4real show last night in my city. Decided to give him this customized jersey that we’ve been working on for a while 😂😂😂. Thanks for lifting the city of Miami spirits up last night and being so amazing to my friends and family. Nothing but Love!

Hart and Wade have been longtime friends. The comedian attended Wade's wedding and later described how all of the guests were given binoculars to see Union approaching from a distant hill.

The dig at Hart's stature may have landed, but the truth is Hart recently had a baby boy who will grow into the Wade jersey right around the time Wade is no longer playing basketball.

The Sixers will open their season Tuesday night in Boston at 8 pm on TNT.