NBA Playoff predictions roundup: The Sixers are far from a lock vs. Raptors 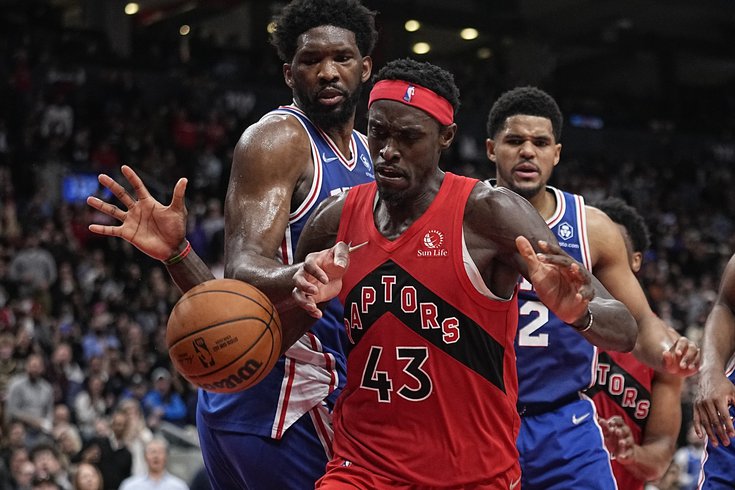 Jole Embiid and the Sixers meet Pascal Siakam and the Toronto Raptors in the first round of the playoffs.

The Sixers' playoff run begins Saturday and things... don't seem entirely right going in, or at least not as optimistic as they probably should be.

Joel Embiid has played phenomenally in his push for NBA MVP and seems like a given to keep doing so.

But between erratic play from the rest of the team in the final stretch of the regular season, questions about whether James Harden can show up in the big moments, Matisse Thybulle being completely out for games in Canada, and a Toronto Raptors group that presents a tough defensive matchup, the Sixers are far from the lock they looked like they would be just a couple months ago.

They're still favored to beat the Raptors by most counts, but writers and analysts throughout basketball are expecting the series to be a struggle.

Second, here's an excerpt from Kyle Neubeck's comprehensive Sixers-Raptors preview, which you can read in full HERE. He has the Sixers winning in six.

"The season series and recent matchups have spooked a lot of people in Philadelphia ahead of this matchup. I think that is justifiable fear, but also think it has obscured the fact that the Sixers are probably just a better team. Toronto's path to victory essentially relies on their starters outplaying Philadelphia's starters (who have been formidable) and overcoming a lackluster halfcourt offense via means that may not be sustainable in the playoffs. If the Sixers can simply eat into Toronto's offensive rebounding machine and maintain their status as the superior offensive team in the slower, halfcourt-oriented style of the playoffs, they will win.

There's almost no outcome that would shock me other than a sweep by either team. The Raptors could win a closeout Game 7 in Philly and it wouldn't shock me at all (in fact, I would be terrified to pick the Sixers in a do-or-die game with all the pressure on them). But I am placing my chips with the MVP candidate." [PhillyVoice]

Now let's step back and look at the national picture.

Looking at the team through probabilities and odds, the Sixers have an 8.3 percent chance to win the Eastern Conference Finals and a 2.4 percent shot at winning the Finals, according to BasketballReference's projections. The Raptors have a 6.7 percent shot at the Conference title and a 2.4 percent one at their second championship in four years. The Boston Celtics have the greatest probability of winning both the East and the Finals at 47.5 percent and 27.2 percent, respectively.

FiveThirtyEight projects the Sixers with a 76 percent shot to make it to the second round, 39 percent to conference finals, 11 percent of making it to the Finals, and 5 percent to win the whole thing. Toronto has a 24 percent probability of beating the Sixers and a 7 percent shot at making it any further. Again, the Celtics are the heavy favorite here with a 43 percent chance to reach the Finals and a 31 percent chance at winning it.

ESPN's Basketball Power Index has the Sixers with a 3.2 percent shot at winning the title, Toronto at 1.6, and Boston once more as a heavy favorite at 40.2.

How about the sportsbooks?

Caesars Sportsbook has the Sixers with the same title odds at +1400 and BetMGM has them at +1600 (via VegasInsider).

The Sporting News' panel of five writers like the Raptors across the board, highlighting Pascal Siakam and a big series from him as the key to Toronto advancing. Siakam dropped 37 points, 10 rebounds, and 12 assists on the Sixers last week in Toronto for the triple-double and a 119-114 Raptors win.

The Athletic asked an anonymous scout, coach, and executive to make their picks for each series. For Sixers-Raptors, the scout likes Toronto, the coach and executive like Philly. Harden and especially Embiid just make too much of a difference.

“I think this is one of the most intriguing matchups of the first round. I’m going to go with Philly. I think it’s going to go the distance. With the ability of Joel Embiid and James Harden, two elite players, I think they’ll have a huge impact on the series. Obviously, the Thybulle factor in the (Sixers’) road games, in what could be three road games, is important as well. I think it’s going to be one of the better first-round matchups.

“Toronto won the season series 3-1 and didn’t put up a ton of points but was able to defend. It was pretty evenly matched. I don’t think it’s going to be a high-scoring series. I just think Joel and James’ ability to not only score but put some pressure on you in the paint and get to the free-throw line will be a big factor.” [The Athletic]

In a ranking of the games to open the playoffs, CBS Sports' Sam Quinn had Game 1 at the Wells Fargo Center at the top of his list, seeing it as a "must-win" for the Sixers.

"Rarely is a Game 1 ever considered "must-win" for a favorite, but the 76ers have a tiny margin for error in this series. Their defense has been over 10 points per 100 possessions better with Matisse Thybulle on the floor since the trade deadline, but he will only be able to play in home games in this series due to his vaccination status and Canada's stricter guidelines. That makes Philadelphia's home-court advantage critical against an opponent that is 23-11 since Feb. 1 and has a 31-17 record in games in which OG Anunoby plays. Those paces would be good for the No. 1 seed if stretched over 82 games. When healthy, Toronto is as dangerous as any team in the East. The 76ers have to take care of business in their four home games, because if they have to win on the road without Thybulle, they're in deep, deep trouble. That urgency will be felt on the floor Saturday." [CBS Sports]

The Inside Guys talked about the Sixers too, emphasizing the huge pressure that's on Harden to perform.

Shaquille O'Neal has the Sixers sweeping the Raptors.

Charles Barkley sees how Toronto matches up. He's scared for the Sixers.

"[Sixers president Daryl Morey] pushed all of his chips to the center of the table," Barkley said on the TNT broadcast Sunday. "There's a tremendous amount of pressure on James Harden. Embiid is gonna do what he does, but if James falls flat... Man, this franchise, I don't think they will ever recover to be honest with you."