Ben Simmons is back in Philly, ready to play this time against the Sixers

No Embiid, Harden, or Maxey for the Sixers like everyone imagined, but Simmons will play in the Wells Fargo Center for the first time since the trade. 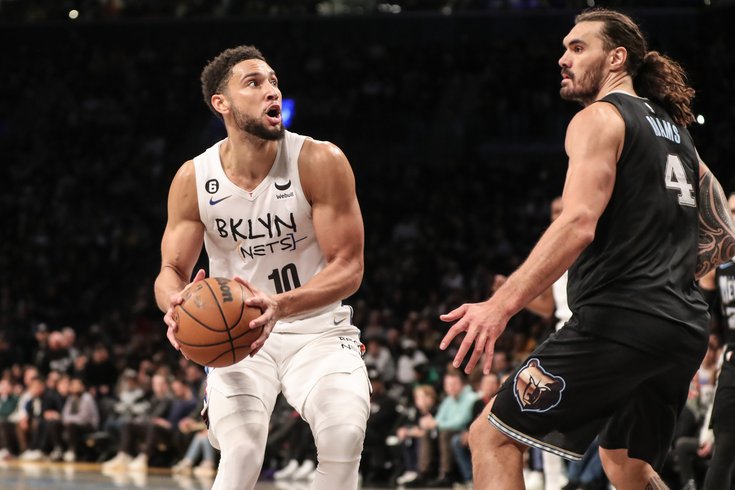 Brooklyn Nets guard Ben Simmons, shown against Steven Adams and the Memphis Grizzlies Sunday night, will play at the Wells Fargo Center Tuesday night for the first time since his departure from the Sixers.

The trade happened. Ben Simmons, after sitting out the whole season to that point, was going to the Nets. James Harden was on his way to the Sixers.

The months-long saga was over. Everyone could move on.

Well, not really. There was always the matter of the return game, which came a few weeks later and was seen by many fans as a chance to let out any pent-up frustration over a relationship turned sour.

But it didn't work out that way. Simmons didn't play and the Sixers got thrashed on the national stage by Kevin Durant and the Nets, 129-100. Embarrassing? That was an understatement, Shamus Clancy wrote that night.

Now, eight months later and after plenty of turmoil within the Brooklyn organization itself, Simmons is playing again and will finally play at the Wells Fargo Center Tuesday night for the first time since his trade out of Philadelphia last February.

It just won't work out the way everyone is hoping for again, because now all of the Sixers are hurt. No Harden, no Joel Embiid, no Tyrese Maxey. All three are sidelined.

"I mean the fans will make up for it, I think," Simmons cracked with a smile after Brooklyn's Tuesday morning shootaround. "I'm looking forward to it. It's gonna be fun."

Surrounded by cameras, microphones, and recorders hanging on his every word – both from the Brooklyn and Philadelphia media – Simmons said all the right things.

He's happy to be back in town, he's ready to play, he did enjoy his time in Philadelphia, loves Maxey (who doesn't?), and has a lot of love for Embiid too, even though they don't really speak.

But the relationship between Simmons, the Sixers, and Philly fans has always been more complicated, especially with how it ended.

He was a good player, a rising star, and fans wanted to love him. But if he developed a decent jumper and worked on his free throws, he would've been great, probably one of the NBA's best. He just never improved on either, regressed in some cases, and it all came to a head in that now infamous playoff series and passed up dunk against Trae Young and the Atlanta Hawks.

The Sixers lost, fans – after numerous chances – were fed up, Embiid and head coach Doc Rivers couldn't fully go to bat for him, and Simmons wanted out because of that soon after. Then came the holdout and the salary grievance. Things got ugly and they dragged on for months.

But that's all in the past, or at least everyone is saying it is.

"I had a lot of great moments," Simmons said. "We shared a lot of moments here, ups and downs, this is where I became a man, I feel like, so I've always had a lot of respect for Philly in that way. The fanbase, it's a special fanbase. I got a lot of love for Philly."

The Sixers, running back Embiid, Harden, and Maxey as their big three, are still trying to fulfill their championship aspirations. And Simmons is trying to get his career back on track after offseason back surgery and not having played at all last year – He looked brutal to start the season but has put up 37 points in his last two games.

It's over now, or at least it should be, save for one more return game Tuesday night with a Wells Fargo Center crowd that will no doubt be ready to let Simmons hear it.

"I'm so excited to play," Simmons said. "It's gonna be fun. It's gonna be an opportunity for me. I've never been in this situation, so I gotta appreciate it and really take it all in."