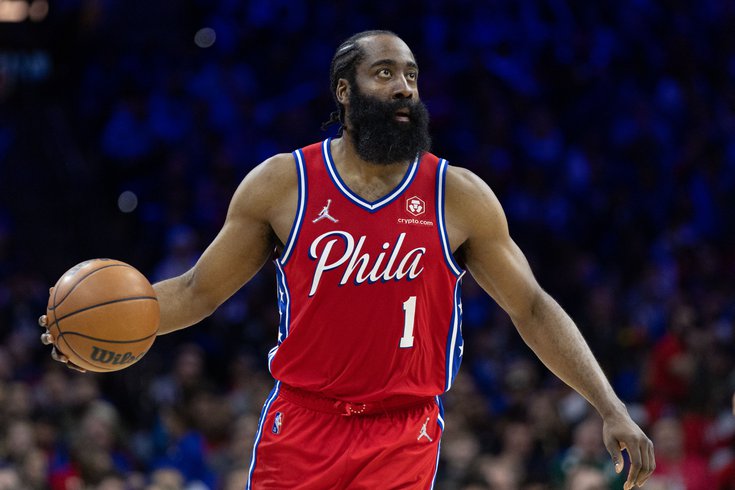 James Harden and the Sixers will be back playing on Christmas Day.

Sixers guard James Harden is expected to miss a month of action due to a right foot tendon strain suffered in Wednesday night's loss to the Wizards, a team source confirmed to PhillyVoice on Thursday. ESPN's Adrian Wojnarowski was first to report the news on Thursday. The news is a serious blow to a Sixers team already sputtering through the early portion of the season with Harden at full (or close to full) health.

Harden appeared to have two separate issues during the loss to the Wizards, the first on a knee-to-knee collision in the first half that left Harden slamming the floor in frustration before taking the floor again. The tendon strain appears to have been suffered in the second half, on a play that led to Harden walking slowly toward the sideline in visible pain. Harden was subbed out following that sequence, but would eventually return in the fourth quarter and hit a couple of threes as the Sixers fought to keep pace with Washington.

The resurgent start to the season for Harden was one of a few positive developments for the Sixers during a rough go of things, with Harden showing off some of his old scoring form in losses to open the year against the Celtics and Bucks. Philadelphia has already had to navigate several games without the services of center Joel Embiid, and Harden (alongside Tyrese Maxey) has been a big part of helping the Sixers get through those games without him. Knocking Harden out for a month is a tough pill for Harden to swallow after the excitement he expressed to get a full, healthy offseason of work to prepare for this year.

Immediate eyes turn to both Embiid and Maxey, who will be expected to lead Philadelphia in the time without Harden. Maxey has taken yet another leap to open his third season in Philadelphia, though his biggest performances have come with Embiid on the sideline with more room to operate. Now that one of their headline stars is ruled out for roughly a month, Maxey is in line to get the majority of Philadelphia's on-ball reps, pairing with Embiid to spearhead Philadelphia's attack.

On Embiid's end, the responsibility is the same as it ever was — step in and be the franchise player everyone expects him to be, leading Philadelphia through a rough stretch without their second star. Offseason plantar fasciitis left Embiid in subpar condition to start the year, but he has rebounded well following a tough start on offense, his efficiency numbers moving past career highs even with his three-point touch lagging behind. He'll have to find a way to continue that trend without Harden's excellent playmaking to help him, though the good news is that Embiid and Maxey have spent plenty of time together at this point, flashing good chemistry in the pick and roll themselves.

One thing that might end up being a silver lining is the Sixers getting a look at some tougher defensive lineups with Harden's meandering defense out of the picture for a bit. As long as his back stiffness clears up, De'Anthony Melton seems in line to step into the starting lineup over the next month, and Melton has been one of Philadelphia's big early season success stories so far. With a more active, disruptive defender in Harden's place in the lineup, the Sixers will hope they can find some degree of two-way success to make up for the clear hit they'll take on offense.

Make no mistake, though, this sets the Sixers back a good bit. Beyond the impact to the win column, this year is an 82-game marathon meant to bring the team together on the floor through reps and shared experience. With Embiid already missing a few games and Harden now expected to be out for a month, the Sixers are missing out on valuable time that can't be replaced. As they seek to build a team that can compete against contenders with years of work together, the Sixers will have to hope they can make up for lost time once they can get everyone on the floor together.

They have the talent to get by in the short-term, but it's the long-term impact that matters most. Here's hoping for a speedy Harden recovery.