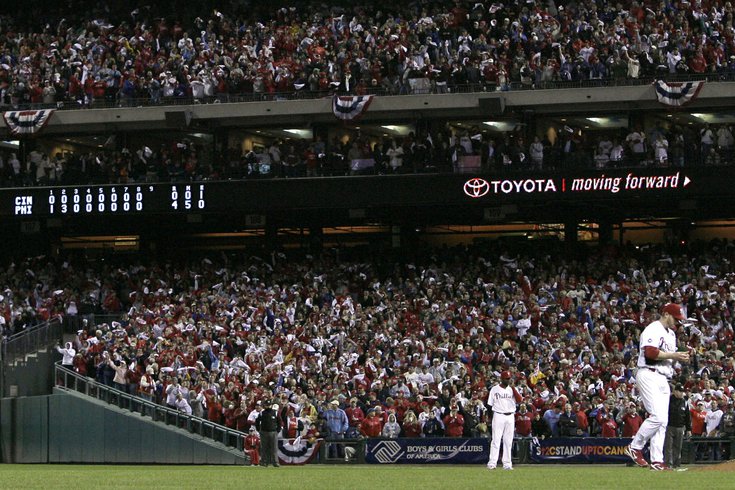 Was Charles Dickens an honorary Philadelphian? "It was the best of times. It was the worst of times," sums up the journey of Philadelphia sports fans. I've witnessed some huge sports moments in this city during my time on the planet. I would imagine I'm part of a small group of people who've seen multiple playoff no-hitters in person. There are only three in MLB history. The most recent two have both come at Citizens Bank Park.

On October 6, 2010, I pooled together some money from working as a 16-year-old busboy to buy tickets to a Phillies playoff game. I went with my friend Bobby. Coincidentally enough, Bobby's grandfather attended the first postseason no-hitter in baseball history, Don Larsen's perfect game for the Yankees in Game 5 of the 1956 World Series. Fate was at hand.

In Roy Halladay's first ever postseason game, he faced 28 batters, retiring 27 of them. The lone blemish was a full-count walk for Reds outfielder Jay Bruce. Horrendous call from the ump on that fourth ball.

I remember the wait between the bottom of the eighth inning and the top of the ninth inning that day. No one dared to speak a word about what was happening, but all 45,000-plus people knew the deal, that magic was unfolding with perhaps the greatest pitcher of his generation turning in an all-time performance. An adult-aged man sitting next to Bobby and me asked us to get in a picture with him. This is before everyone had smartphones too. In retrospect, that was extremely creepy, but we knew we were a part of a moment that was bigger than us in this collective community that is Philadelphia sports and we were riding the wave. We assumed he still used MySpace and posted it on there.

After catcher Carlos Ruiz fielded a dribbler and fired a Reds player out at first base, CBP went ballistic. We were on top of the sports world. At 16, this was our entire existence. Hell, I guess it still is now. We had gone to countless Phillies games over the years, walking home in South Philly despondent after the innumerable losses we were always prone to taking in. This was different. We were now bound together for a sports achievement that will live on long after we've left this earth.

You couldn't tell us anything that night. We were knights for King Roy, first of his name. We'd have a story to tell until the end of our days.

Flash forward 12 years later to Wednesday night. I was in the ballpark with my friend Lawrence. The Phillies, against every strain of rationality, were in the World Series up 2-1 against a juggernaut Astros team and controlled home-field advantage, one of the best home-field advantages in all of sports. There was no doubt in my irrational mind that the Phillies were going to crush the Astros and then win the World Series in five games at Citizens Bank Park, turning in one of the greatest underdog runs ever.

It was not meant to be.

The Phillies drew a couple walks early in a 0-0 contest before it slowly dawned on me that they were getting no hit. It was the inverse of the hushed tones of Hallday's no-no. I found myself yelling, "How about someone gets a f-----g hit?!" to no one in particular from the fourth inning on.

A huge five-run fifth inning from Houston, rocking Phils starter Aaron Nola, quickly changed the tide and my mindset. My concern was no longer if the Phillies would win this game. It was whether the Astros would throw a no-hitter against them. I did not want that additional infamy for a franchise that has lost more games than any team in the history of professional sports. I did not want that L on my record as a Philly sports spectator, as someone who had seen the 2017 NFC Championship Game, Doc's no-hitter and both halves of Game 5 of the 2008 World Series.

Houston went through four pitchers and none of them allowed a single hit. By the time the bottom of the ninth came, I was numb to it all. The sports outbursts of my teenage years and early 20s were not erupting. I am older with normal adult problems and worries, much different than that cocky 16-year-old who strolled into CBP in a maroon Mitchell & Ness jacket. I did not want to leave early and get a head start, slipping away from the worst sports experience I've ever seen with my own two eyes. I stayed. I had to know. I needed the release of knowing it wouldn't go down this way.

By the time J.T. Realmuto grounded out to end things, I was less angry than I was simply deflated. I thought it was going to be continuous pandemonium in Philly this week, seeing the Phils win the World Series in Philadelphia for the third time in team history. The storybook ending for the 2022 Phillies would not be as formulaic as Phils fans hoped.

As I had done all of those times after Phillies, Eagles and Sixers losses, I walked home once more from the Sports Complex. It was a familiar feeling, one that I thought I was finally escaping. For the sake of my brain, I hope it's just a funny footnote during this World Series story that ends in the Phils' favor roughly 60 hours from now.