What to watch for in Sixers' scrimmages during Orlando restart 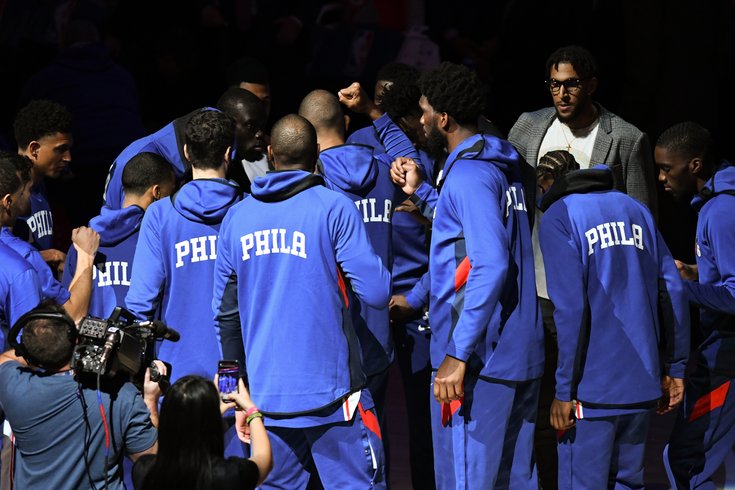 Over four months after their last organized game together, the Sixers are primed for the beginning of scrimmage season in Orlando. A Friday afternoon date with the Memphis Grizzlies kicks off a three-game exhibition slate before the real games begin, and finally, mercifully, basketball is back.

The time away has given the Sixers a lot to chew on, and while they aren't bringing any fresh faces to Orlando, they are coming with a brand new approach. Between changes to the starting lineup and a role shift for one of their young stars, Tobias Harris taking on a vocal leadership role, and the team growing closer in the friendly confines of Disney World, there's optimism surrounding the Sixers for the first time since before the season began.

So what's worth keeping an eye on as the games begin again in mid-July? Glad you asked.

The success of their new-look starting unit

I don't have any real questions about a foursome of Ben Simmons, Josh Richardson, Tobias Harris, and Joel Embiid. Is it perfect? Certainly not. Does it have the versatility and top-end talent to win? Absolutely.

It all hinges on Shake Milton, and how successful the team can be with him in the new starting five. The Sixers believed in Milton enough to lock him in long-term last summer, but he has had quite a second year with the team, going from fringe rotation player to injured and out of sight to integral piece of a team that wants to contend for a title. Can Milton be trusted to play big minutes when it counts? That's something Brett Brown has discussed at length, even as he offers endorsements of his young guard.

"I always get nervous about relying on young guys for the NBA playoffs. Shake is no different, it's no disrespect to Shake, it's just my 20-year history in the league that it ends up a man's world, and a veteran type of environment, which he just doesn't have the luxury of years to put next to his name yet," Brown said last week. "But I'm going into this excited, I think some of the performances he had on a consistent basis can't be that far out of reach, where maybe he can produce a large portion of that again."

The Milton who we saw pre-pandemic wouldn't just tie things together, he would take them to a new level. With another pick-and-roll ballhandler on the floor, and one who is comfortable shooting off-the-catch and off-the-dribble, the Sixers suddenly have options on offense. Deploying Ben Simmons as a forward — where he can attack as a screener, a cutter, and even run snug pick-and-roll sets with Joel Embiid — gives the Sixers more options to toy with.

Teammates, including Joel Embiid, have expressed confidence in Milton and underscored that he isn't just some token starter. Phrases like "running the team" have popped up in Orlando, suggesting he's going to have the ball in his hands a good bit. That could end up being a mixed bag depending on his shot, and thus, how teams defend him. Compare the looks below, one pre-breakout and one post-breakout, and the urgency to get over screens defending him is extraordinarily different, even with the opponent remaining the same.

If the Sixers can stack shooting and ballhandling around Embiid and Simmons, their post-ups and interior bully-ball become a lot easier. Additional pick-and-roll handlers can help them get easy buckets instead of trying to create all their own offense. We could be looking at a very different team in Orlando on offense.

Or, you know, the young guy could look like a young guy, and his defensive warts might undermine their one true strength as a team. We have no proof of concept for this group — the five presumed starters haven't played a single minute, even a single possession together. Now, they're expected to lead the team to victory. What a season.

Who wins the 8-10 spots in the rotation?

At least six spots in Philadelphia's rotation are nailed down, and really it's probably seven. The five presumed starters (Embiid, Simmons, Harris, Richardson, Milton) and Horford are locked in. Matisse Thybulle is just behind that group, and while some rookie struggles could get him bounced, I don't think his spot is in much jeopardy either.

Everyone else comes into Orlando with something to prove. There are warts on each of the guys vying for a spot in the rotation, which Brown wants to start at 10 and whittle down to nine guys by the playoffs. Mike Scott is fearless and the sort of stretch four Embiid likes next to him, but he was dreadful most of this season. Glenn Robinson III is a capable three-and-D guy, but his self-creation skills aren't there. Furkan Korkmaz is a candidate to get played off of the floor. Alec Burks is the sort of guy who can shoot you both into and out of a game.

They're all going to get looks, from the sound of things. Philadelphia's rotation isn't going to be set from the get-go, with Brown planning to give different guys looks at the back of the rotation in each of the three scrimmages. By the time they take the floor against Indiana for their first "real" game, the hope is for the 10-man rotation to solidify so they can really hit their stride in the playoffs.

Strangely enough, this all sort of hinges on Horford. We have been over this a ton this week, so let's not belabor the point: Horford has spent zero time that we're aware of playing next to Joel Embiid in their Orlando camp. He has already been bumped from the starting lineup, and it's anyone's guess how much time he'll get once the games begin.

But if Horford does spend some time playing next to Embiid, that's bad news for Mike Scott specifically, a one-position specialist who can't just slide over to another wing spot, especially next to an Embiid-Horford frontcourt. Because Brown has already tipped his hand on one of the bench lineups (Simmons-Korkmaz-Thybulle-Harris-Horford), any extended burn for Horford at power forward all but it eliminates Scott from contention for minutes.

On the one hand, Horford is one of your best and most talented players. On the other, he has been a disaster for most of the year and you can't structure the rotation to get the most out of his talents. The only way to do that makes life more difficult for their franchise player.

If I was handicapping this, I would say Robinson III is the favorite for a nailed-on spot because he's the only real two-way player of the group. When push comes to shove, I think Brown will get Scott involved, because he has the short memory teams need from shooters in the playoffs. Korkmaz will play early, but I suspect it gets ugly for him in a playoff environment.

I know, I know. This has been the question since the moment he stepped on an NBA floor. False promises and strong proclamations have been made before. Brett Brown demanded a three per game from him and got nothing. I don't much care about the rhetoric anymore and would like to see some action, and I'm sure that applies to most of you reading this.

But an update on the rhetoric comes anyway. Following their final practice pre-scrimmage, Brett Brown was asked about his expectations for Simmons as a shooter in Orlando, given what he'd seen from him so far. The head coach backed away from any sort of numeric expectation, but he did share that he believed something has changed in his protege.

"Ben Simmons is going to play basketball and the sport is going to tell him what he should or shouldn't do," Brown said Thursday. "His spirit, his mindset coming down here to willingly find space and find threes, that has been a paradigm shift, that has been an attitudinal change...I've seen a player that's cocky and playing and when the game says you can shoot because nobody's on you, he does, and he doesn't blink. His teammates love it, and so does his head coach. But as far as going deeper than that and like, numbering it up or sitting him if he doesn't shoot, I'm not doing that...I'm proud of how I think he personally has handled what I think is going to be a paradigm shift."

You've seen videos from Orlando. You've heard the coach and his teammates and even Simmons himself speak, suggesting we're in uncharted territory. So let's see if it's the same old song or not.

Philadelphia's title hopes rest on the shoulders of Embiid, their best player and the guy who could end up having matchup advantages all throughout the Eastern Conference playoffs, matchups pending. It's a responsibility it seems he has taken seriously, with coaches and teammates raving about his work throughout quarantine, dedication they say has carried over to Orlando.

Philadelphia is trying to prepare him for defenses clamping down and attacking him with doubles at every turn. The Sixers, Brett Brown says, have doubled Embiid constantly during Orlando camp, mixing up timing, personnel, and angles to keep him guessing. Embiid will have to walk the line between aggression and awareness, and his coach expects him to shoot between 10-15 free throws per game in Orlando while improving his recognition of when to find teammates.

If you ask the man in question, he feels good about where he's at heading into the restart.

"Teams are going to double me every single possession that I'm on the court," Embiid said Thursday. "We're getting me used to it...I feel like I've improved, it's all about patience. I either have it or I don't. If I don't, just pass it back, kick it out and trust my teammates to make those shots. If I do have an opportunity, then attack."

Defensively, Embiid has always been streets ahead reading the game. Dominant as he has been at times on offense, he has holes that teams have exploited, limiting his effectiveness in big moments. Their championship hopes hinge on his ability to read and react with a defender on his back, and we'll get our first look at his sharpness there on Friday afternoon.