What will Al Horford's role for Sixers look like in Orlando? 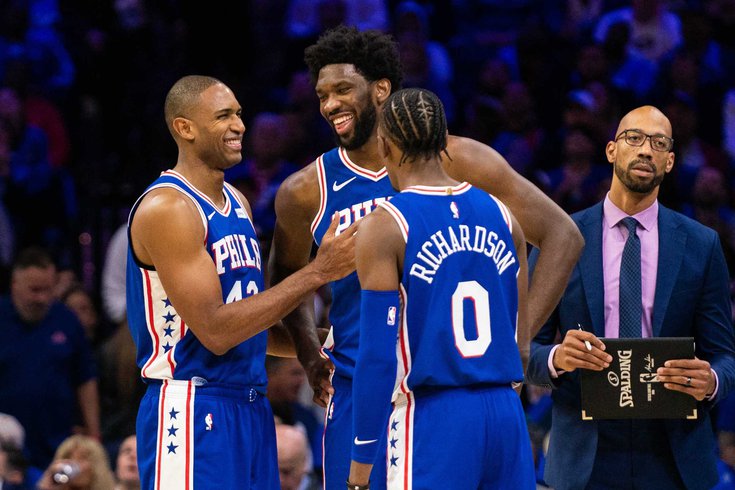 Four months after a disappointing Sixers season came to a screeching halt, optimism springs eternal in Philadelphia. Moving Ben Simmons to a forward spot and bringing Shake Milton into the (presumed) starting lineup was all it took for some people to get back on board with their title chances. But those moves create a related question: what happens to Al Horford, and how does the team get value from one of their highest-paid players in a new role?

Signed just last July to a four-year deal worth as much as $109 million, the sales pitch for Horford was multi-faceted. The Sixers were getting a team-first, high-level player who could help them account for planned (and unplanned) Joel Embiid absences, defend reigning MVP Giannis Antetokounmpo, and lean into their super-sized project already in the works. Add on that it allowed them to remove one of Embiid's primary antagonists from a hated rival, and the outline for a successful signing was there.

And then they actually had to play basketball. Horford has had perhaps his least effective season as a professional, struggling to find his shot and his place within a clunky Sixers offense. Open jumpers and jump hooks that were money in the bank for Horford throughout his career have found nothing but iron this season. The skills that set him apart from other bigs have been muted in a lineup that features as many as three other players who want to operate in the same space he does.

Worst of all, he has shown his age. At 34, Horford's legs have lacked spring for most of the season, eating into his defensive effectiveness and leading to a lot of stuck-in-cement moments as the last line of defense. Though he has had midseason dips in form before, his age and ability to fit into this specific team raise larger concerns. If this is the best he has left in him, what does it say about the future?

Perhaps the Orlando restart will tell us.

Fit issues were a Sixers talking point long before Al Horford ever suited up for Philly. The conversation about the team has largely centered around Embiid and Ben Simmons coexisting since the moment they took the floor together, and they've already shuffled through several iterations of teams to search for a title-capable formula.

The data suggests that Horford, poor as he has fit with the original starting lineup, can manage just fine when he's not sandwiched between Philly's odd-fitting stars. And in fact, the bench group featuring Simmons and Horford with no Embiid has been much more effective than lineups featuring Embiid combined with only one of the other two players.

This strips away all forms of context and should not be taken to suggest Joel Embiid is the problem weighing everything down. In fact, lineups featuring Embiid with neither of Simmons or Horford on the floor have been dynamite for the Sixers, outscoring opponents by over 14 points per 100 possessions. What is important is noting all three guys can anchor lineups that routinely best opponents when they are not trying to operate in a telephone booth.

We can expect to see a healthy dose of the Horford-Simmons combination when Embiid hits the bench, as head coach Brett Brown has alluded to already. One combination we've heard about already is a group that spent time together during the season: Simmons-Korkmaz-Thybulle-Harris-Horford. That group has played around 156 minutes together this season and ended up slightly negative, and offensively stagnant compared to other groups anchored by that duo.

But you don't need to do advanced film study to figure out how lineups centered around Horford and Simmons will work. Any iteration of four out around Simmons mitigates his offensive weaknesses, and Horford is a more natural partner for a lot of staple plays than Embiid. Horford's history as a pick-and-pop threat and a short-roll passer give him value in any group that doesn't have Embiid carving out space on the low block.

The problem is that those groups occupy a small chunk of the rotation. Brett Brown has a very specific target in mind for Joel Embiid once they get rolling: 38 minutes per game. That would leave just 10 minutes for groups for Horford at center.

For a journeymen backup like Kyle O'Quinn, that allotment of minutes is more than enough in a playoff series. In fact, 10 minutes of competent backup center play was the difference between a Game 7 loss and a Conference Finals appearance for Philly last season. But even as the Sixers have gotten away from their super-sized look, they have yet to abandon hope for Horford at power forward.

What has "twin towers" look shown so far?

"I think if you went back and looked at that Clippers game right before the All-Star break happened, it would be a decent reference point to consider maybe it looks like this," Brown said last Saturday about his altered rotation. "One of the groups we haven't done since we've been down here is pair Al and Joel together...that will obviously be one of [the lineups we look at]...as far as what that ultimately means in relation to, okay, how many minutes is he going to play? Is he going to end the game, is he going to start the game? That for sure is fluid, and happy to share when it happens, when we start looking closely at Al and Jo together again."

The Clippers game, a popular Brown reference point in the months since, was the first time he pulled the trigger on moving Horford to the bench.

Though it was Furkan Korkmaz who got the start that night, not Shake Milton, the impact was similar. Horford's first minutes came at the five with groups led by Simmons, and his shifts finished with bench groups usually led by Embiid and Josh Richardson (though foul trouble for Embiid complicated things a bit). Notably, Horford did not close the game out, making way for rookie wing Matisse Thybulle in the closing stages of a big win.

Simmons' pre-COVID injury did "force" the Sixers to take a look at lineups with the big frontcourt surrounded by guards, a rare sight for Philly this season. Embiid and Horford played just 105 minutes without Simmons all season, and the few reps they have together aren't exactly super meaningful.

Their final pre-quarantine game against the Detroit Pistons, for example, featured a healthy dose of two-big lineups, and it was a rare game with big nights from both men. But those performances mostly happened separate from one another in minutes where they had room to operate.

If you squint hard enough, you might see flashes of what they could accomplish together. On one early possession, Horford was able to cut from the corner to attack a zone error from Detroit, with Embiid picking him out easily for a dunk.

The cut from the corner (botched defense or not) is unlikely with Simmons in the mix simply due to positioning, as Horford was often stationed at the top of the key during offensive sets for Philadelphia. Even on sets where Horford starts closer to the corner, there was less space for him to cut into as a result of defenders sagging off of Simmons up top.

But this isn't exactly a blueprint for success. Horford is not going to make his money as a cutter. So what happens when Horford initiates the play and Embiid is the finisher? You sort of see the pointlessness of the partnership.

The vast majority of assists from Horford to Embiid look something like this, or a basic swing pass to Embiid before he cans an 18-foot jumper. There's nothing wrong with this play, necessarily, it's a perfectly fine entry from Horford, but there's no real value added.

Horford's best traits as a big man on offense benefit players who succeed through burst, movement, or shooting. Cutters thrive next to Horford, who can pick you out by seeing over the top of the defense and gift you an easy layup. Shooters don't have to do much more than stand in the corner when Horford, one of the best short-roll passers in the game during his career, is rolling downhill. Embiid wins through power and positioning. He needs you to get him the ball and to get the hell out of the way, ready to shoot or attack a closeout if the ball comes back to you.

There are bench players who could end up next to these two who stand to gain more than Embiid does. Glenn Robinson III and Matisse Thybulle, for example, are at their best when someone else can take over creation responsibilities for them. In order to create room for their off-ball cuts into the paint, however, you need to move the franchise player away from it. Embiid spacing the floor to open it up for Simmons is one thing, asking him to do so to get more value from Horford's passing is another.

What does this mean for Orlando?

Where does that leave this partnership? As of Tuesday evening, Brown confirmed that looks featuring Horford and Embiid had yet to see the floor together in Orlando, nearly two weeks after they arrived. With an off day Wednesday, that provides the Sixers with one potential practice day for those groups before their scrimmages begin on Friday afternoon, and even that seems an unlikely time to have them get reps in.

In normal times, Brown likes to talk about how he, "spends his money" during rare in-season practice sessions. This period has afforded coaches around the league an unthinkable, Scrooge McDuck vault of cash to spend as they see fit. You want to tinker with the offense or the starting lineup? There has never been a better time to do so.

Brown's proverbial money has been spent moving an unproven second-year player into the starting lineup, the bulk of the team's time focused on the new-look starters and the bench combos (Embiid-Richardson, Horford-Harris-Simmons) we've seen all season. He hasn't spent a single cent on a look that will have to be used if Horford is to play more than 10-15 minutes per game.

Horford, for his part, has downplayed the significance of the changes and the practice structure in Orlando, and believes sharing the floor with Embiid is inevitable.

"The reality is it's going to happen at some point, and I think we'll be fine. I do understand the changes," Horford told reporters Tuesday. "But I don't want people to make more of this than it is."

The signs are just hard to ignore. If Embiid benefitted more from Horford's presence, the starting lineup shakeup wouldn't have been made in the first place. If the staff saw that combination as an integral part of contending, you can bet they would have arrived for the restart, armed with months of film and data study, ready to sharpen that look right away.

Instead, it has been an afterthought, lapped in importance by the integration of a player who has less than a month of productivity under his belt. We'll know soon enough if that was smoke and mirrors or a sign of things to come for last year's surprise signing.